Opinion: Myanmar wakes up from dream of democracy

After five years of leadership under Aung San Suu Kyi, it has become clear that democracy is not a magic wand that will solve Myanmar's problems. The nation's politics needs to include everyone, says Rodion Ebbighausen. 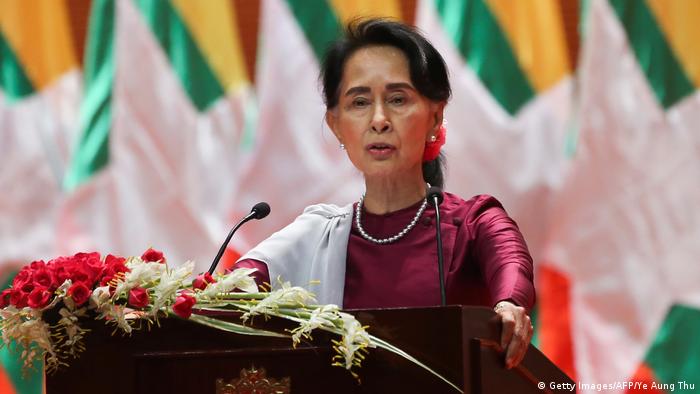 The contrast couldn't be greater. When Aung San Suu Kyi and her National League for Democracy (NLD) party won Myanmar's general election in 2015, the country and the world were euphoric over her victory. It looked like the military's stronghold on the country had been overcome. The people of Myanmar had rejected authoritarianism and the country was embarking towards a rosy democratic future.

Five years later, there is little of that euphoria left over. After Myanmar's election over the weekend, few people are enthusiastic, expectations are low and there is little interest from the international media. The NLD is expected to win handily.

The past five years have demonstrated that casting a ballot is not a magic trick that will solve the country's problems in one fell swoop. Ethnic minorities, who are the third center of power in the country next to the military and the civilian government, have had to realize that the NLD is not ready to approach them.

The result is that the vital peace process to end a 70-year-old civil war has made zero progress. The conflict can neither be ended simply through an election, nor with the charismatic personality of a political figure like Aung San Suu Kyi.

Instead, serious and difficult negotiations are necessary to determine how a federalized system in Myanmar should look like, in which even ethnic minorities would have a say and stake.

In economic policy, where expectations for the NLD were high, it quickly became clear that although an election legitimizes politicians, it does not automatically make them experts.

Large Asian companies like Samsung have withdrawn from Myanmar, driven away by bureaucracy, over-regulation and blocked reforms. The NLD's fixation on trusting old confidants and refusing to accept outside expertise has massively slowed down Myanmar's potential for economic transformation.

For democratic states and countless non-governmental organizations and activists who had been supporting Aung San Suu Kyi for decades and working for the opening of the country, the displacement of about 700,000 Rohingya since August 2017 was particularly shocking.

The fact that Aung San Suu Kyi then personally appeared at the International Court of Justice in The Hague to defend Myanmar and its military against the accusation of genocide, left many of her admirers stunned.

They had mistakenly believed that they had found in Aung San Suu Kyi someone who shared their ideas of democracy and human rights. They had also underestimated the widespread racism, Islamophobia and chauvinism in Myanmar.

The great euphoria was followed by the great condemnation. Aung San Suu Kyi was stripped of dozens of prizes. Heads of state and government, who used to vie for a photo with Aung San Suu Kyi, now keep her at arm's length.

Countries like Germany have sharply cut back on their development cooperation. Myanmar is a hopeless case, say many former supporters of Suu Kyi.

But the disappointment of today is also the result of the exorbitant expectations of the past. The euphoria then obscured the scale of the problems facing Myanmar, just as the vociferous condemnation today clouds one's view from clearly seeing the opportunities present.

The majority of people in the country want the transformation process to continue. They are in favor of electoral democracy, as evidenced by the high voter turnout despite the COVID-19 health emergency. The military as well as ethnic minority communities have neither blocked nor boycotted the election process, so they are playing along.

Instead of big leaps, however, only small steps are to be expected, and on top of that, there is always the threat of reversal and wrong turns. Fifty years of military rule, 70 years of civil war and deep-seated prejudices cannot be shaken off overnight. Myanmar is a difficult but not a hopeless case.

US issues first passport with 'X' gender marker 1h ago

Iran to resume nuclear talks by November 2h ago

Opinion: It's well past time to free Julian Assange 10h ago