The European Parliament has shunned its 1990 Sakharov Prize recipient Aung San Suu Kyi by suspending her from the prize community. Her standing plunged over Myanmar military abuses against the minority Rohingya people. 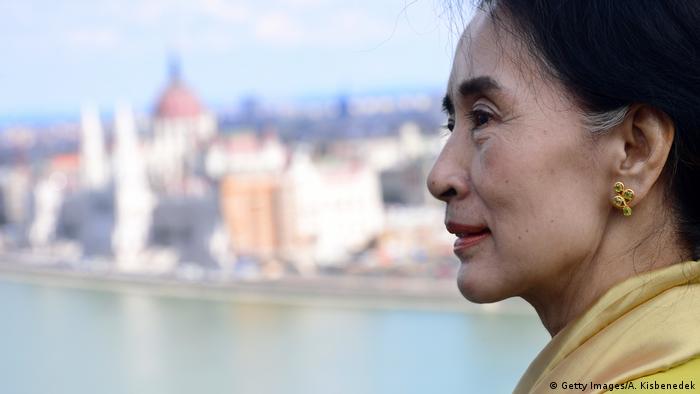 Lawmakers at the European Parliament based their decision to suspend Aung San Suu Kyi, who received the Sakharov Prize for Freedom of Thought in 1990, on what they called "her lack of actions and her acceptance of the ongoing crimes against the Rohingya community in Myanmar," said European Parliament spokesperson Jaume Duch Guillot said Thursday.

Though she won the prize in 1990 for her work to promote democracy in Myanmar, it was not until 2013 that Suu Kyi was able to collect it after being held for years under house arrest.

Despite being Myanmar's top-level state counsellor and foreign minister, Suu Kyi had failed to safeguard the rights of the Rohingya people, said Hautala, a member of European Parliament from the Finnish Green Party.

"To the contrary, she has made clear her support of the military that has led the assault against the Rohingya," Hautala said in a statement, adding she strongly supported the decision to suspend Suu Kyi from Sakharov community of prize-winners.

Read more: Opinion: In cozying up to Orban, Suu Kyi falls even further from grace

Lawmakers did not strip her of the prize itself or the €50,000 ($59,000) award money as she won the award, which is named after Soviet dissident Andrei Sakharov, for work done prior to 1990.

The 75-year-old had previously lost other human rights awards, including the Amnesty International's Ambassador of Conscience Award, but retains her Nobel peace prize.

Suu Kyi, now a key candidate for Myanmar's governing NLD party ahead of a November general election, fell from grace abroad over charges that Myanmar's military brutalized Rohingya people in 2017.

International lawsuits against Myanmar over a campaign that drove more than 730,000 Rohingya people into neighboring Bangladesh as well as alleged abuses against 600,000 people still inside Myanmar are pending at the International Court of Justice in The Hague.

Ilham Tohti is serving a life sentence after Beijing accused him of trying to promote separatism. Thousands of Uighur Muslims are thought to be in concentration camps in China's Xinjiang province.