Myanmar's military: A state within a state

Since Myanmar emerged as an independent nation in 1948, the army has staged three coups to secure its firm hold on political and economic power. Here's a look at the long arm of the military. 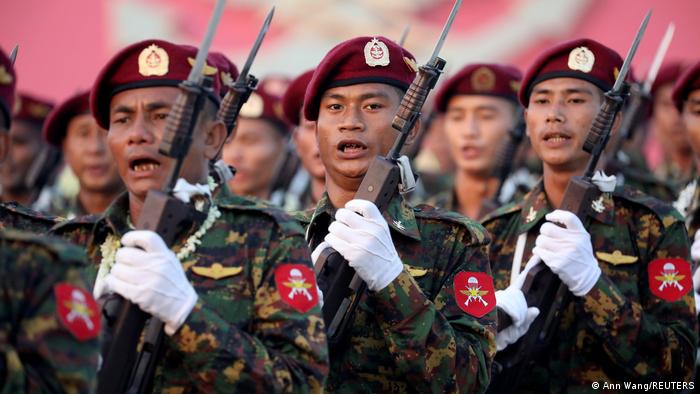 Myanmar has witnessed widespread anti-coup protests this week where public anger at the military for toppling a democratically elected civilian government is on full display. On Wednesday, young protesters in the nation's largest city Yangon held a mock funeral for the army chief Min Aung Hlaing.

Protesters were seen carrying placards demanding an end to military dictatorship, as well as the release of the de facto leader of the civilian government, Aung San Suu Kyi, and other political prisoners.

The Tatmadaw, as the military is known in Myanmar, is both omnipresent and impalpable. It is omnipresent because it dominates not only the political landscape but also the country's economy. It is impalpable because the military functions like a "state within a state," Marco Bünte, political analyst and Myanmar expert at the University of Erlangen-Nuremberg, told DW.

Yoshihiro Nakanishi, a Myanmar expert who published a book on the Tatmadaw in 2013, wrote: "Information about civil-military relations still remains limited; to a considerable extent we are forced to rely on hearsay and guesswork for analysis."

It was not without reason that the generals decided to relocate the capital to Naypyidaw, surrounded by dense forest and mountains, in the nation's heartland. A large area of the capital is a restricted military zone.

Self-perception of the military

Myanmar's army has about 406,000 soldiers in active duty as of 2019, according to data published by the International Institute for Strategic Studies. In absolute terms, it's the 11th largest army in the world.

The Tatmadaw has been the most powerful political player in Myanmar since it emerged as an independent country in 1948, and the army's influence has continued to grow over the years.

It is the only institution that has endured all challenges and survived with its power intact. Even massive international sanctions in the 1990s and early 2000s made little impact on the generals.

The military's self-perception and self-confidence are rooted in the nation's history. "One must not forget that the army is older than the state. It was founded in 1941 in Thailand as the 'Burma Independence Army' by the independence hero Aung San, who is still revered today," Bünte said. "Money and logistical support came from Imperial Japan. Aung San admired Japanese militarism, at least until he defected to the Allies shortly before the end of World War II." 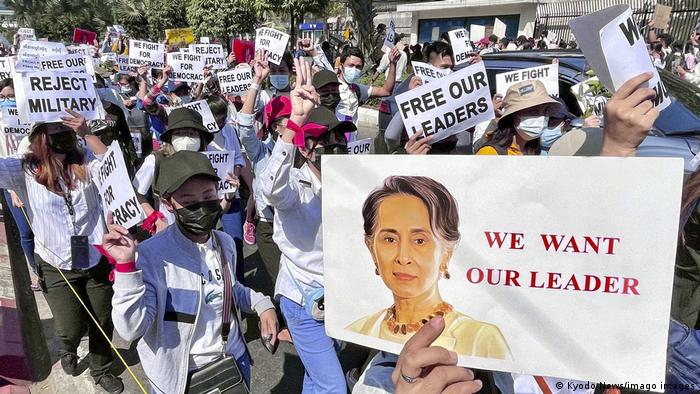 Protesters are demanding an end to military dictatorship, as well as the release of Suu Kyi and other political prisoners

Until his assassination in 1948, Aung San considered a strong army indispensable, as only it could guarantee the country's independence and unity. The army's motto, which is still valid today, originated in Japan. It reads: "One blood, one voice, one command."

In the years after independence, the military saw its main task as fighting communist and ethnic insurgency movements, and preserving the unity of the country. The military always put security above everything else, developing a "paranoid security complex" that persists to this day, Bünte stressed. "The impression that you are surrounded by enemies has not changed since the founding of the state."

Coup and state transformation in 1962

The military first staged a coup in 1962, when General Ne Win initiated the "Burmese Way to Socialism." While the socialist revolution failed, Ne Win was successful in completely transforming the political system to suit the military, Nakanishi underlined in his book. This created a strong linkage between the military and the state. A key mechanism here was that officers leaving military service were given posts in the civilian administration, depending on their rank. Generals were usually provided with ministerial posts.

This system remains largely intact today. According to all that is known about the recent military coup, an important factor was that army chief Min Aung Hlaing would have had to leave the military in 2021 and no follow-up post could be found for him in the civilian government. This was partly because the military's proxy party, the Union Solidarity and Development Party (USDP), had performed poorly in the November 2020 elections.

The people as a new threat

The socialist experiment ended with mass protests in 1988, which the military put down with another coup. According to estimates, about 3,000 people were killed. Saw Maung, the leader of the military regime at the time, declared, as Min Aung Hlaing did a few days ago, that the new military government was fundamentally different from the previous government.

1988 marked a profound turning point, as the military no longer viewed only external enemies and ethnic groups as opponents, but for the first time also own citizens, Nakanishi and Bünte pointed out.

The system of providing retiring military officers with positions in the government was maintained, in addition to an economic opening that saw the emergence of large state-owned companies such as the Union of Myanmar Economic Holding (UMEHL). These firms offered further opportunities to provide army officers with posts in the civilian administration and business.

This resulted in deepening ties between the military, the state and the economy.

The extent of the military's influence can also be seen in the fact that except for Aung San Suu Kyi all founding members of the National League for Democracy (NLD), founded in 1988, were ex-military officers.

As Bünte puts it, "Myanmar was a heavily militarized agrarian state." A military career was the most attractive for many at the time. So it is not surprising that even opposition politicians came from the ranks of the military.

In the following years, the military government developed the so-called seven-step road map to a "disciplined democracy," which resulted in the 2008 constitution that is still in effect today.

The goal of the new constitution was, among other things, to assign a political role to the Tatmadaw, in order to sustain the military's vast network of patronage.

At the same time, a "developmental dictatorship" was implemented, as Nakanishi calls it. Cooperation with the NLD led to the lifting of international sanctions, an influx of foreign investment and gave the country a major development boost.

But the period after Aung San Suu Kyi's and NLD's election victory in 2015 threatened the model of disciplined democracy in several ways, from the military's perspective.

The NLD's civil service reform in 2017 succeeded in breaking the rule that military personnel should be appointed to government posts. And the NLD made no secret of the fact that it would not accept the 2008 constitution.

"Basically, Suu Kyi never recognized the military. She had become part of the political system to change it, but not to implement it," Bünte said.

With the February 1 coup, the military put a temporary end to the erosion of its power.

The crucial question in light of the nationwide protests is how the military will now respond. Will it use force to quell the protests, as it did in the violent crackdown of 1988, or is it indeed a "new military," as Min Aung Hlaing said. Reports are emerging that the military has started using live ammunition against protesters. A look at other countries in the region shows that democracy movements, such as in Indonesia, have only been successful when the military has been unable to maintain its cohesion.

Looking at Myanmar, Bünte noted, "Deviation or diversity of voices is seen as a weakness. There is a decidedly strong esprit de corps and a cultural tendency not to disagree with higher-ranking or older members of the (military) community." However, he added, the military is also like a black box, and it is difficult to judge from the outside whether there are forces that want to reverse the coup.

If you experience problems while browsing dw.com from a region where internet access is restricted, consider using the Psiphon application. To add the DW Psiphon app, send an email to dw-w@psiphon3.com for a download link. If you use Psiphon via DW, you will first be r-directed to DW's website. From there, you can continue onward to any other website.