Myanmar: At least 18 dead in crackdown on anti-coup protests

The EU says it will impose sanctions on Myanmar after protests against military rule were again met with police violence. 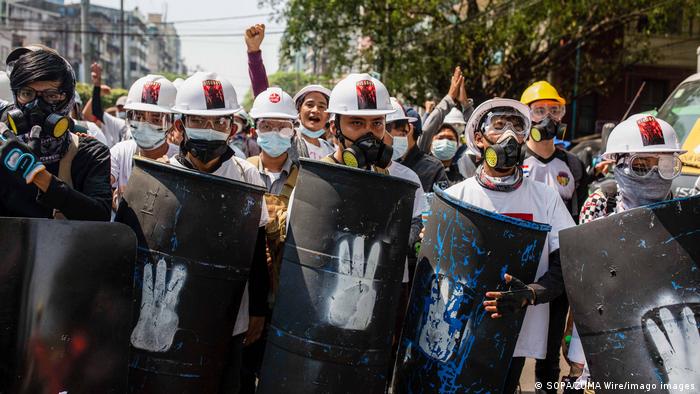 Protesters used their own riot shields against police in Yangon

Myanmar police have cracked down on anti-coup protesters using stun grenades, tear gas and firing into the air, killing at least 18 people in the bloodiest action since the military seized power four weeks ago, the United Nations said on Sunday.

US Secretary of State Antony Blinken condemned the crackdown in Myanmar, tweeting, "we stand firmly with the courageous people of Burma & encourage all countries to speak with one voice in support of their will."

Police opened fire in the southern town of Dawei, killing three and wounding several, according to politician Kyaw Min Htike. The deaths were verified by medics and reported by local media.

Officers were also seen shooting in the main city of Yangon. A man brought to a local hospital with a bullet wound died from his injury, according to a doctor. Myanmar's Mizzima media outlet also reported the death.

The heavy-handed clampdown has intensified since the military seized power in a coup on February 1.

United Nations Secretary-General Antonio Guterres strongly condemned the use of lethal force against protestors and arbitrary arrests, his spokesperson said in a statement.

"The Secretary-General urges the international community to come together and send a clear signal to the military that it must respect the will of the people of Myanmar as expressed through the election and stop the repression," the statement from Stephane Dujarric said.

Scores of students and teachers have been detained in Yangon, and several bloodied people were seen being helped away from the protests in the city.

"Police got out of their trucks and started throwing stun grenades without warning," Hayman May Hninsi, who was among a group of teachers protesting in Yangon, told Reuters. They fled to nearby buildings.

"Some teachers got hurt running. We're assessing the situation and whether to go out again or not."

Doctors and students in white lab coats also fled as police launched stun grenades outside a medical school in another part of the city, videos posted online showed.

In the northern city of Mandalay, police fired guns into the air, trapping protesting medical staff in a city hospital, a doctor there told Reuters by telephone.

An activist in Mandalay, who wanted to remain anonymous for security reasons, told DW that he witnessed the military targetting ambulances and hospitals in the city.

"Today I saw that they (the military) even shot at the ambulances and they arrested some people sheltering themselves in a hospital. They are not holding back anything anymore and they are using extreme violence against the protesters," the activist told DW. 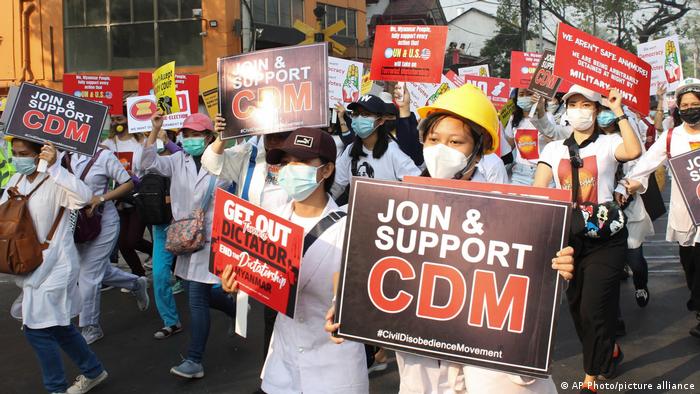 Police were deployed early and in force, taking positions at the main protest sites in the country's two biggest cities where protesters, many clad in protective gear, had gathered, witnesses said.

Medical students were marching in Yangon's streets at an intersection that has become a gathering point for protesters before they spread out to other parts of the city.

Police began chasing the protesters, while residents erected makeshift roadblocks to slow down the police advance.

European Union diplomatic chief Josep Borrell also condemned the crackdown and reiterated again on Sunday that the bloc would impose sanctions in response to the coup.

"Violence will not give legitimacy to the illegal over-throwing of the democratically-elected government," Borrell said in a statement. "In shooting against unarmed citizens, the security forces have shown a blatant disregard for international law, and must be held to account."

According to Borrell, "The EU will take measures in response to these developments shortly," Borrell said. The sanctions are expected to be finalized in the coming days.

He said he was speaking on behalf of the ousted Aung San Suu Kyi civilian government and called for international intervention to help end the coup.

"We need further strongest possible action from the international community to immediately end the military coup," he said on Friday.

On Saturday, Myanmar's state broadcaster reported that the diplomat had been fired because he had "betrayed the country and spoken for an unofficial organization which doesn't represent the country and had abused the power and responsibilities of an ambassador."

"I decided to fight back as long as I can," Kyaw Moe Tun told Reuters in New York.

With the death toll rising in Myanmar, world leaders have repeated their calls for the military junta to step down and US officials have announced new sanctions.