Members of the G7 have called for an end to the "intimidation and oppression of those opposing the coup" staged by Myanmar's military in early February. Three people have been killed in protests opposing the takeover. 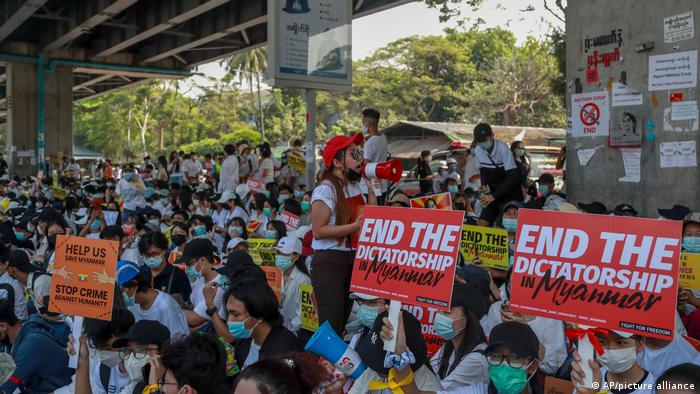 Protesters returned to the streets in Yangon on Tuesday

The Group of 7 said Tuesday they "firmly condemn" the army's violent response to demonstrations against the February 1 coup in Myanmar.

"Use of live ammunition against unarmed people is unacceptable. Anyone responding to peaceful protests with violence must be held to account," said a statement from the G7 foreign ministers.

They also urged the military to "exercise utmost restraint and respect human rights and international law."

Pro-democracy activists have been taking to the streets of Myanmar's cities in the weeks since the military takeover on February 1 to demand the release of deposed civilian leader Aung San Suu Kyi and President Win Myint.

The junta, which has declared a state of emergency and pledged to hold elections within a year, has responded with force at times.

At least three anti-coup protesters have been shot dead in the demonstrations so far.

Protesters turned out again on Tuesday, although their numbers were smaller than the massive crowds seen during a general strike on Monday.

The military has said it seized power because the November elections were rigged to deliver a landslide victory to Suu Kyi's National League for Democracy — an allegation rejected by the country's election commission.

Malaysia goes ahead with Myanmar deportation

Meanwhile, Malaysia says it has deported 1,086 Myanmar nationals back to their homeland, despite a court order halting the move.

The high court in Kuala Lumpur had granted a stay of the deportation until Wednesday to hear an appeal from Amnesty International and Asylum Access.

The two rights groups argued that minors and asylum-seekers fleeing persecution in Myanmar were among the migrants, and that Malaysia would be in breach of its international duties by sending them to a country where they could be in danger.

Migrants return 'of their own free will'

Malaysian immigration chief Khairul Dzaimee Daud said the returned migrants did not include asylum-seekers or members of the Rohingya Muslim minority, who are not recognized as citizens in Myanmar.

"All of those who have been deported agreed to return of their own free will, without being forced," he said.

Authorities had initially said 1,200 detainees would be repatriated. It was not clear why the final number was lower.

Days after the coup in Myanmar, Malaysia accepted an offer from the junta to repatriate the migrants on navy ships sent by the new government.

The US and other Western missions, as well as rights groups, had urged Malaysia not to go ahead with the deportation, saying the country's cooperation with the junta served to legitimize the military government and its crackdown.