The Myanmar anti-coup movement has recorded its first fatality after a 20-year-old woman shot by authorities died in the hospital. Protests continue as international sanctions pile on junta leaders. 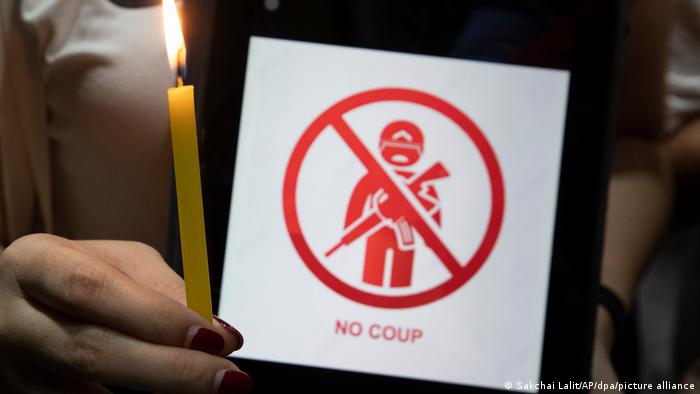 Protesters have marched against the coup for two consecutive weeks

A 20-year-old woman who was shot last week in the anti-coup protests in Myanmar died on Friday, marking the first confirmed fatality in the nationwide demonstrations that started at the beginning of the month.

Her death comes as the situation in Myanmar intensifies, with security forces cracking down on protests and military generals facing international sanctions.

"We will keep the (cause of death on) record and send a copy to the respective authorities. We will look for justice and move forward," a doctor at the hospital told AFP.

Mya Thwate Thwate Khaing, who turned 20 in a hospital before her death, has become a symbol of resistance as protesters have wielded massive banners dedicated to her.

EU foreign affairs spokesperson Nabila Massrali expressed condolences to Mya Thwate Thwate Khaing's family and friends, calling on Myanmar's security forces to refrain from violence against those "protesting the overthrow of their legitimate government," according to the German Press Agency (DPA).

What is the latest on Myanmar protests?

Tens of thousands of protesters, including workers in their uniforms, joined the strike on Friday in Myanmar's largest city, Yangon, local media reported.

Security forces in the northern state of Kachin forcefully dispersed a small group of protesters. Reuters journalist Poppy McPherson in Myanmar said on Twitter that soldiers were also threatening journalists.

The internet blackout has continued in a "curfew-style shutdown," from 1 a.m. and returning at around 9 a.m. local time.

At least 520 people have been arrested so far, according to the Assistance Association for Political Prisoners monitoring group.

How have protesters responded to sanctions?

On Thursday, Britain and Canada imposed asset freezes and travel bans on the junta military generals. The US had already sanctioned the coup leaders.

Protesters have largely welcomed the sanctions against the coup leaders and have called for more international action.

Activist Thinzar Shunlei Yi said on Twitter that she was supporting the sanctions that Canada and Britain have imposed against military generals, calling for further sanctions by more countries. "We will be waiting for EU sanctions announcement on 22nd," she added.

In an interview with DW, Human Rights Watch's executive director Kenneth Roth said targeting the senior generals meant "going after the businesses that the military owns and that it uses to finance the coup and its repression."

"The junta will listen to their pocketbooks," Roth added.

Governments and international organizations have said Myanmar's most prominent pro-democracy figure did not receive a fair trial, and accuse the ruling junta of sacking the rule of law in a bid to hold power.