As several thousand people rallied in Yangon and Mandalay, the military junta shut down internet services for the second time. 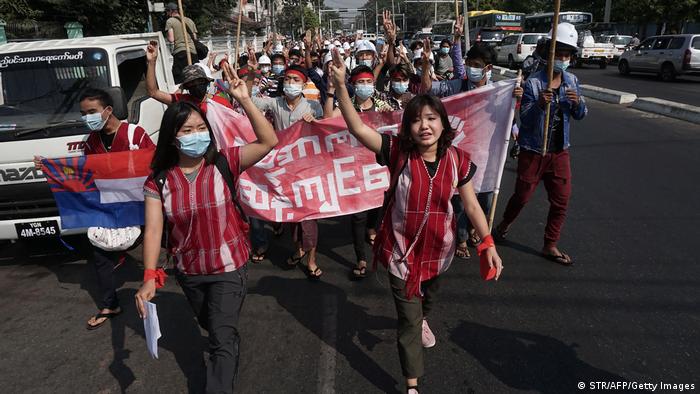 Protesters have been using symbols, such as the three-fingered salute seen here, to show their support for Aung San Suu Kyi's civilian government

The new ruling military junta in Myanmar responded to ongoing protests against the recent coup by imposing a nationwide internet blackout, the NetBlocks Internet Observatory reported on Saturday.

Despite the blackout, demonstrations in the Southeast Asian country continued to grow with Saturday seeing the largest anti-coup protests yet as around 3,000 protesters marched near Yangon University.

The UN called for internet services to be restored and for the military regime to hand power back to the civilian government.

In Yangon, members of the crowd shouted "Military dictatorship should fall" and "Down with dictatorship."

"They don't respect our people's votes and I think they are betraying the country," one protester told AFP. "Our revolution starts today."

The protests took on a festive atmosphere on the streets of the capital as drivers blasted their car horns and people clapped and danced. Many protesters wore red, the color of Suu Kyi's National League for Democracy (NLD).

More than 100 police in riot gear were deployed to block them from proceeding and protesters left the area without confrontation.

They were expected to gather again in another part of the commercial capital later on Saturday.

As many as 2,000 people marched further north in Mandalay.

Calls for protests against military rule have spread online and outpourings of dissent have become bolder.

Saturday's internet blackout was the second time online services were cut, the first being on February 2 when the military arrested civilian leader Aung San Suu Kyi and others. 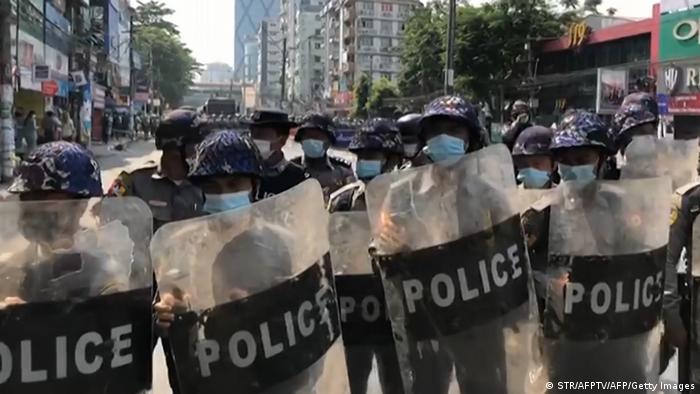 The junta had already cracked down on social media, shutting down Facebook and Twitterin recent days.

They had ordered telecom companies to block access to certain sites where users were organizing popular resistance. Facebook users had quickly gathered in the "Civil Disobedience Movement" forum before the service was shut down.

Facebook on Saturday condemned the internet shutdown across the country and called on the junta to return access to social media users.

"We are extremely concerned by orders to shut down the internet in Myanmar," said Rafael Frankel, Facebook's director of public policy. "We strongly urge the authorities to order the unblocking of all social media services."

Norwegian telecom company Telenor confirmed that it had been asked to shut down access to social media services. The company said it had "challenged the necessity" of the order but gone ahead with it anyway.

Some users had been able to circumvent the block with VPN services with trending hashtags such as #WeNeedDemocracy and #HeartheVoiceofMyanmar receiving millions of mentions.

The NetBlocks Internet Observatory revealed that Myanmar had been put under a second blackout in a tweet on Saturday explaining that "real-time network data show national connectivity falling to 54% of ordinary levels as users report difficulty getting online."

The UN Office for Human Rights responded to the blackout on Twitter by demanding the restoration of internet services "to ensure freedom of expression and access to information."

UN Secretary-General Antonio Guterres told reporters on Friday that: "We will do everything we can to make the international community united in making sure that conditions are created for this coup to be reversed."

His comments came after a UN special envoy made first contact with Myanmar's deputy military commander and urged the junta to step down and return power to the civilian government.

State media reported on Saturday that military officials had met with the diplomats and asked them to work with the country's new leaders.

"The Government understand the concerns of the international community on the continuation of Myanmar's democratic transition process," International Cooperation Minister Ko Ko Hlaing reportedly said in the meeting.