The military junta has deployed extra troops and armored vehicles around key protest locations across Myanmar. Aung San Suu Kyi's detention was extended until Wednesday, instead of Monday as previously thought. 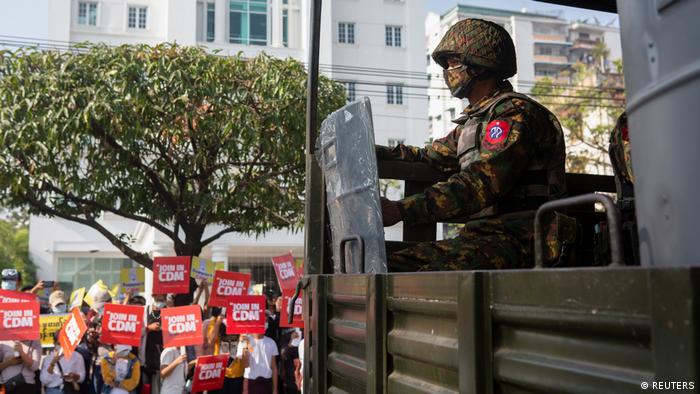 Security forces in Myanmar deployed extra troops and armored vehicles around the country on Monday after cutting off access to the nation's internet.

The military has continuously ramped up its efforts to quell nationwide demonstrations, as protesters demanding the release of former de facto leader Aung San Suu Kyi refuse to step down.

Meanwhile, the detention of San Suu Kyi has been extended until Wednesday, as opposed to Monday, as previously thought, her lawyer said.

Extra troops were seen in key locations of Yangon, the nation's commercial hub and biggest city, including armored personnel carriers near the central bank. Demonstrators still took to the streets on Monday despite the military presence.

Suu Kyi's detention was due to expire on Monday, but her lawyer, Khin Maung Zaw, said that a judge at a court in the capital, Naypyitaw, said she was remanded until February 17.

"Whether it is fair or not, you can decide yourself," Khin Maung Zaw said. A member of the lawyer's team said the judge had spoken with Suu Kyi via video chat, and she had asked if she could hire a lawyer.

Suu Kyi's extended detention is likely to raise tensions between the military, which seized power in a coup on Feb. 1, and demonstrators. Hundreds of thousands of protesters have taken to the streets to denounce the coup and call for a return to the government that they elected.

Suu Kyi had been expected to face a court on Monday in connection with charges of illegally importing six walkie-talkie radios, her lawyer said.

On Monday, thousands protested in Mandalay, the country's second-largest city, chanting and holding signs that said "Free our leader," "Who stands with justice?" and "Stop arresting people illegally at midnight.

In Yangon, fewer protesters gathered than in Mandalay, due to Monday morning's internet cuts and reports of armored vehicles on the streets. Over 1,000 still gathered outside the Central Bank of Myanmar building – one of the primary protest locations.

'A fight for the future'

They also carried signs that read "#SupportCDM" and "#SaveMyanmar." CDM refers to the civil disobedience movement under which doctors, engineers and others in Myanmar strike to push the military to release elected leaders and return the country to civilian rule.

"This is a fight for our future, the future of our country," youth activist Esther Ze Naw told Reuters at a protest in Yangon. "We don't want to live under a military dictatorship. We want to establish a real federal union where all citizens, all ethnicities are treated equally."

Meanwhile, police in Naypyitaw detained about 20 high-school students protesting by a road. "Remember, we don't swear at the police and don't sign anything at the police station," one student could be heard saying.

For the third time in two weeks, Myanmar's junta has shut off the internet to restrict the flow of information for protesters. A new cybersecurity law would permit officials to arrest the military's online critics.