Security forces have stepped up late-night arrests of civil servants, doctors and others. But defiant activists came up with a plan to stop them. 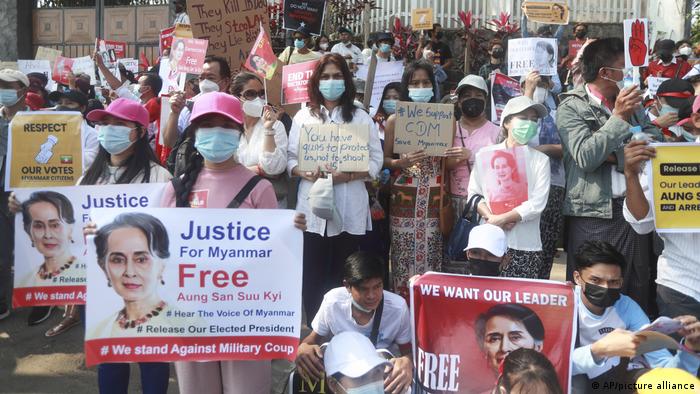 Crowds defied curfews in Myanmar during the night into Saturday, following rumors that police were about to launch a fresh wave of raids on anti-coup activists.

The civil disobedience began hours after a seventh consecutive day of nationwide rallies— the largest so far — ended on Friday.

Demonstrators have held huge daily protests across the country after the military ousted leader Aung San Suu Kyi  and seized power on February 1.

The UN Human Rights Council adopted a resolution on Friday calling on Myanmar to release Suu Kyi and other officials from detention. It urged the military government to refrain from using violence on protesters.

What activists did overnight:

Neighborhood groups sprung up to stop arrests of activists, skirting a junta ban on Facebook.

News of such arrests circulated widely on social media, including in memes captioned: "Our nights aren't safe anymore" and: "Myanmar military is kidnapping people at night."

Also on Saturday, the military ordered the arrest of seven well-known backers of the protests for their comments on social media.

Among the seven are pro-democracy activists Min Ko Naing and "Jimmy" Kyaw Min Yu — veterans of the 1988 student uprising. Others facing arrest warrants include a singer, a television presenter, a writer and a political analyst.

In a statement, the military's True News team warned people should report back to police if they see any of the seven listed or risk punishment if they are found sheltering them.

It said the activists could face a sentence of up to two years for comments that the military considers a threat to national stability.

"I am so proud to have a warrant issued along with Min Ko Naing. Catch me if you can," writer Ei Pencilo said to her more than 1.6 million followers on Facebook.

'We are not afraid'

In the nation's business hub, Yangon, people called others outside to gather and protest by banging pots and pans — an action traditionally associated with driving out evil in the country.

"We didn't know who will be taken, but when we heard the sound, we went out to join our neighbors," said Tin Zar, a storekeeper in Yangon's north.

"Even if they shoot, we are not afraid," she told news agency AFP.

One group swarmed a hospital in the city of Pathein, 190 kilometers (almost 120 miles) west of Yangon, after rumors that a popular local doctor would be taken. The group chanted a Buddhist prayer urging protection from harm.

"If I have problems, I will ask for your help," doctor Than Min Htut told the group, flashing a three-finger salute that has come to symbolize resistance to the coup.

Than Min Htut spoke to AFP on Saturday to confirm he was still free and would continue to participate in the civil disobedience campaign. 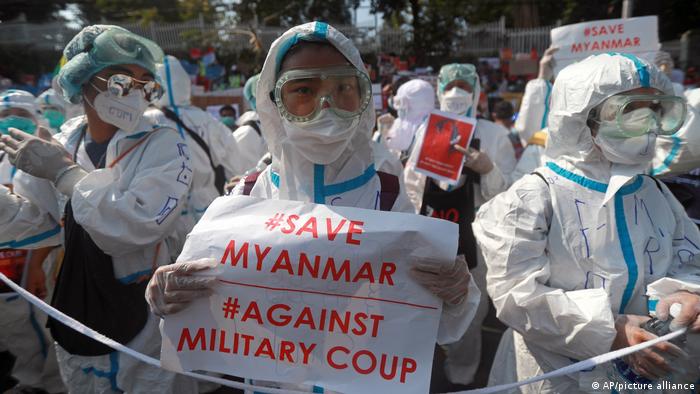 "Family members are left with no knowledge of the charges, location, or condition of their loved ones. These are not isolated incidents, and nighttime raids are targeting dissenting voices. It is happening across the country," the Assistance Association for Political Prisoners, a watchdog group for political prisoners, wrote in a statement.

The United Nations human rights office on Friday said more than 350 people, including officials, activists and monks, have been arrested in Myanmar since the February 1 coup. The UN noted some faced criminal charges on "dubious grounds."

No let-up from protesters

The protests continued unabated on Saturday in Yangon, the capital Naypyitaw, the second city Mandalay, and other towns.

In Yangon, some protesters held signs commenting on the nighttime disappearances.

The state-run Global New Light of Myanmar newspaper claimed thousands of people had joined pro-military demonstrations in parts of Myanmar on Friday. News agency Reuters was not immediately able to verify the report.

So far, the generals appear undeterred by the widespread condemnation on the streets and from the international community.

The junta has proclaimed a state of emergency lasting a year. It had promised to hold fresh elections, but with no precise time frame.

Myanmar's military: A state within a state

Since Myanmar emerged as an independent nation in 1948, the army has staged three coups to secure its firm hold on political and economic power. Here's a look at the long arm of the military.