The United Nations' leading human rights body has highlighted the Myanmar junta's "dubious" arrests and the firing of live ammunition. However, the protests go on. 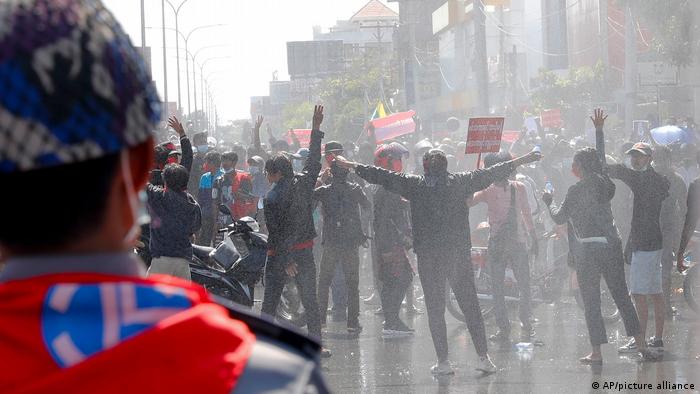 The United Nations' top rights body opened an urgent session on the Myanmar military coup on Friday, amid calls for sanctions against the junta.

The UN Human Rights Council (UNHRC) has no power to impose sanctions, but it can act as a vehicle to train international attention to human rights violations.

What did the UN Human Rights Council say?

"The world is watching," al-Nashif warned. "Draconian orders have been issued this week to prevent peaceful assembly and free expression, and police and military presence on the streets has grown progressively over the last several days.

"Let us be clear: the indiscriminate use of lethal or less-than-lethal weapons against peaceful protestors is unacceptable," she said.

However, al-Nashif stressed it was important that any sanctions against the regime should be targeted against "specific individuals who are credibly alleged to have violated the people's rights."

The US has already announced new sanctions that target junta leader Min Aung Hlaing and other top generals.

Amnesty International told DW on Friday that it had evidence that security forces had used live ammunition.

A woman was critically injured after being shot in the head at a protest in Naypyitaw on Tuesday.

"The incident in question in Naypyitaw, the capital, was filmed. We were able to geolocate where the incident took place. We saw that they were using a locally made clone of an Uzi weapon," Kayleigh Long, a researcher covering Myanmar for Amnesty International, told DW. "The shells would indicate it was light ammunition and not rubber bullets."

"That is, as far as we can tell, the first use of live ammunition against protesters. We've also seen them using water cannons and other disproportionate force in trying to quell the protests."

Demonstrations against the coup continued unabated on Friday with tens of thousands of people reportedly turning out.

While demonstrations in the country's largest city Yangon remained peaceful, there were reports that those elsewhere had resulted in clashes with police.

After its arrest of the country's de facto leader Aung San Suu Kyi last week, the junta has proclaimed a state of emergency lasting a year. It had promised to hold fresh elections, but with no precise offer of a timeframe.