Myanmar military generals accused of rights violations are facing sanctions from Britain and Canada. Human Rights Watch has said coup leaders will only listen to their "pocketbook." 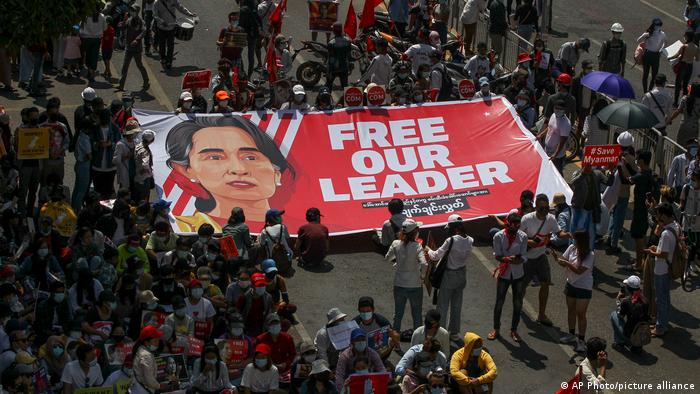 Ottawa blacklisted the defense and home affairs ministers as well as seven other officials, freezing any assets they had in Canada as well as potential financial dealings with them.

Already the US had imposed sanctions on the leaders of Myanmar's February 1 military coup.

In an interview with DW, Human Rights Watch's executive director Kenneth Roth said targeting the senior generals meant "going after the businesses that the military owns and that it uses to finance the coup and its repression."

Roth said there were signs that Myanmar soldiers were "tempted to just switch sides to join the demonstrators."

China's government, which had "watered down" a UN Human Rights Council resolution last Friday, was "terrified of the idea of a popular uprising overthrowing a dictatorial government," Roth reckoned.

Among Myanmar's key foreign revenue sources are extractive industries, such as gas and oil drilling, and jade mining.

Protesters had weakened the economy significantly, said Andrews, and they were looking to the international community to apply tough sanctions and diplomacy.

In Myanmar's south Thursday, some 200 people protested at Kanbauk, outside pipeline facilities that pump gas from offshore fields for export.

The demonstrators approached the premises of Total of France, PTTEP of Thailand and Petronas of Malaysia, and later joined a larger Kanbauk rally.

In Yangon, protesters abandoned cars in the middle of roads, trying to hinder security forces. In the capital Naypyidaw, water cannons were used against demonstrators.

Motegi said the four, during a virtual conference Thursday, saw the "urgent need to restore the democratically elected government in Burma," now Myanmar.

On February 1, Myanmar's military overthrew the civilian government, alleging fraud during November elections won by Suu Kyi's National League for Democracy (NLD) in what was internationally seen as a landslide.

On Britain's sanctions, the activist group Burma Campaign UK said it would only amount to constraints on the generals' leisure travel.

"These military leaders won't have any assets in the UK to freeze, so the practical outcome of these type of sanctions is that they can't take holidays in the UK," said Mark Farmaner, the campaigns director.

A new generation of pro-democracy protesters in Myanmar is diverse, social media savvy and more connected to the world. But will it make a difference? DW reports.