The US and France have condemned a bloody crackdown on protesters in Myanmar, as the anti-coup protest movement continues to defy security forces. 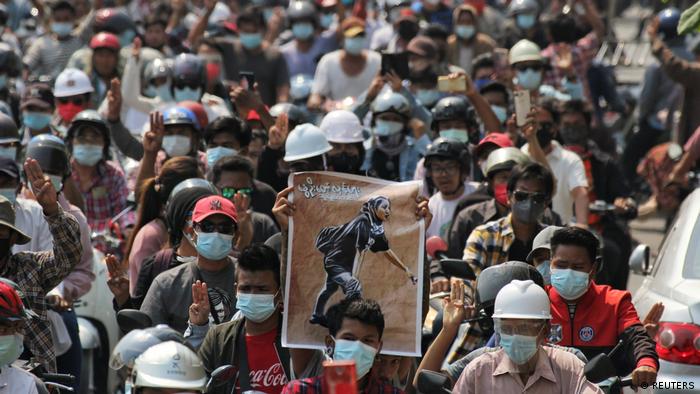 People attend a funeral for 'Angel,' a 19-year-old protester shot dead in Mandalay

Protesters again took to the streets in cities and towns across Myanmar on Thursday, following the deadliest day thus far in ongoing demonstrations opposing a military coup.

On Thursday, there were reports of security forces breaking up demonstrations in Yangon with tear gas and gunfire. There were no immediate reports of casualties.

Yangon protesters hung sheets on lines across the street to block the line of sight for police aiming their guns, Reuters news agency reported.

In the second largest city, Mandalay, fighter jets made several low passes in formation over the city as protesters gathered in the streets.

Thousands of protesters in the city were attending a funeral procession for a young university student who was killed during a demonstration Wednesday.

What started the protests?

Since the start of the coup, Myanmar security forces have arrested nearly 1,500 people, according to the Assistance Association for Political Prisoners (AAPP) monitoring group.

The AAPP says more than 50 protesters have been killed in total. The first death took place on February 19.

There have also been reports of journalists being rounded up and arrested.

"We know that we can always get shot and killed with live bullets but there is no meaning to staying alive under the junta," activist Maung Saungkha told Reuters.

British Prime Minister Boris Johnson said he was "horrified" by the escalation of violence in Myanmar and called for an end to the army's crackdown.

"We stand with the people of Myanmar in calling for an immediate end to military repression, the release of Aung San Suu Kyi and others, and the restoration of democracy," Johnson said.

"France calls for an immediate end to the repression in Myanmar, for the liberation of people who have been held and for the respect of the democratic choice of the Myanmar people as expressed during the recent elections. We are at your side," he wrote.

The US State Department said it was "appalled and revulsed" by Wednesday's violence.

"We call on all countries to speak with one voice to condemn the brutal violence by the Burmese military against its own people," said spokesman Ned Price.

UN envoy Schraner Burgener said she had warned Myanmar's military prior that it was likely to face international backlash and isolation for its increasingly violent crackdown.

She reported that deputy military chief Soe Win responded by saying "We are used to sanctions, and we survived ... We have to learn to walk with only few friends."

Former UN rapporteur: Time for China to stand up

Former UN special rapporteur on human rights, Yanghee Lee, told DW that despite the severe crackdown, she does not believe the protesters will relent.

"The people of Myanmar are determined that they will not live under this illegitimate military junta," she said.

"China recently came out with a statement that it will not support an unstable neighboring country, and that it will support the free and democratic transition for Myanmar," Lee continued. "I think it's time that China really makes sure that this is what they plan to do, and that they are willing to to deliver."

The Myanmar junta's National Defence and Security Council gave unanimous approval for the decision, according to state media.