Opinion: The German government is in free fall

Angela Merkel's government has announced a U-turn and said that there will be no Easter shutdown after all, just two days after announcing one. DW's Jens Thurau warns that the chancellor has lost her way. 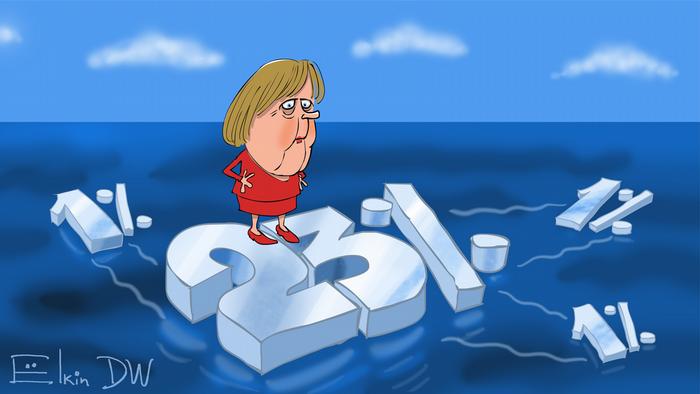 The German government is presenting a very sorry picture at the end of March 2021 with regard to its pandemic management. And there is one thought, barely conceivable just a few weeks ago, that is hard to dislodge: Will Chancellor Angela Merkel once again manage to give a meaningful structure to the fight against the coronavirus? Or will she give up? Or even have to step down?

It's not likely to go that far. Who would want to take over in the midst of the most difficult political crisis in decades? But the decline in authority of this internationally respected leader in her own country is breathtaking.

At the beginning of the week, at her energetic behest, the round table of state premiers agreed to a four-week extension of the lockdown, including a stricter shutdown over Easter as a kind of forced rest period. But hardly anybody saw the point in a five-day break like that, especially as most people in Germany didn't seem to feel like celebrating wildly or traveling anyway.

However, Merkel got her way. She apparently held a gun to the heads of the leaders, some of whom wanted to allow light forms of Easter tourism, and is reported to have signaled that if they didn't go along with her plan, she would drop the entire agreement.

The threat worked for a couple of hours. But there were angry protests from the business sectors, the churches and the opposition. Even Merkel's own interior minister, Horst Seehofer (CSU), openly opposed the Easter break. This comes as popularity ratings for Merkel's CDU have plunged in recent polls, a slump that probably has partly to do with the recent unsavory mask procurement scandal in which various politicians of her party are embroiled.

And now a U-turn: There won't be a strict shutdown over Easter after all. Merkel has said that she made a mistake. She admitted that more harm than good would be done and that there were too many questions that could not be adequately answered. She even asked all the people living in Germany to forgive her.

This was a noble step — it seldom happens that heads of government make public apologies and concede shortcomings. But it was an admission of failure, and some opposition parties have called on the chancellor to call a confidence vote.

Everyone in power, the government and the federal states, has got hopelessly lost in detail. The consequence is that people no longer understand what the rules are. First of all, there was a blanket travel ban for almost everybody over Easter, but within hours some states had strayed from this. The fact that information from the chancellor's discussion with the state premiers was leaked almost by the minute is also a sign that respect for Merkel is waning.

Since the beginning of the pandemic, Merkel has appeared to be more aware of the challenge it poses than many others. But one year in, her answer remains only that there have to be more restrictions. One attempt to open up in conjunction with rapid tests failed because of a shortage of such tests. And the vaccination campaign continues to drag. Germany has lost its direction in the fight against the virus.

This is tragic for a woman whose seriousness, willingness to compromise and strong nerves have earned her respect all over the world. But her much-praised readiness to hear all sides of a debate and involve all participants is her downfall in this third wave of the pandemic.

Of course, this is not really all Merkel's fault. German federalism prevents chancellors from ruling with an iron fist. But right now, this government is incapable of taking coherent action. And the number of infections is climbing continually. Things can really only improve from here.

US lawmakers meet Taiwan president amid China anger 3h ago

Spain: About 1,500 evacuated from towns near Zaragoza due to fires 11h ago

Opinion: India's 75th anniversary — from snake charmers to a global superpower 11h ago