US State Secretary Antony Blinken has promised NATO a new start. But this will involve new commitments and high costs, for example with regard to China, writes DW's Barbara Wesel. 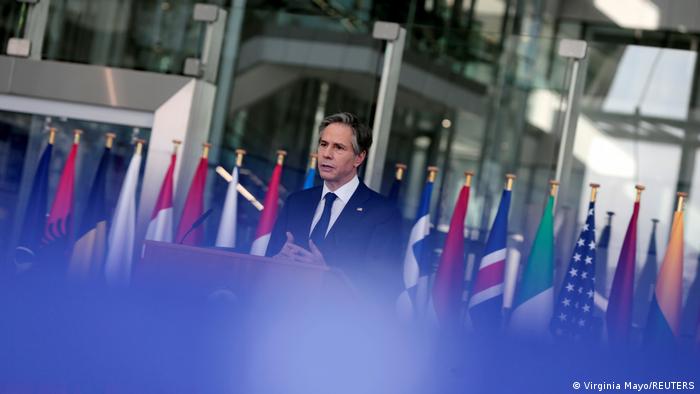 If we're very honest, there was something comforting about Donald Trump's chaotic presidency. His refusal to cooperate with international organizations and his near withdrawal from NATO also relieved Europeans of the obligation to commit to political cooperation and a common defense policy. Since it was clear who was to blame, it was possible for some to lean back and dream of strategic autonomy.

Now, the new US Secretary of State Antony Blinken has made clear that Washington wants to start over. He has promised that US partners will be treated fairly so long as they bear their share. Hopefully, nobody in Germany will have been deluded enough to believe that the tiresome debate over increased defense expenditure was over. It will be much harder to justify the slow tempo in Berlin to the current US administration.

Future talks will not only be about money and weapons but other capabilities, too. Blinken has called for NATO to adapt to new threats. Though this has been talked about in Europe for a long time, little action has been taken. The US wants a much broader approach, not only the magic 2% defense investment benchmark, but other political capacities as well. This could open up new opportunities for the German government to strengthen NATO from within by providing logistic and economic support to member states.

Blinken warned that certain countries were no longer moving in "the right direction." He was talking about Russia, butalso about China, with which tensions are particularly high in the wake of the most recent meeting. It is clear that the US knows that the situation for the EU is not as straightforward.

"We know that our allies have complex relationships with China that won't always align perfectly," Blinken said. "But we need to navigate these challenges together." He went on to say that the gaps needed to be closed in "areas like technology and infrastructure."

We all know the list of strategic goods, from G5 to chips and battery supplies, that Beijing can potentially use as political leverage against the EU.

The EU just got a taste of the cost of standing up to Chinese President Xi Jinping. Its sanctions targeting senior officials in Xinjiang over allegations of rights violations against the Uighurs were diplomatic and moderate. Beijing's reaction was not. And now the EU-China investment treaty agreed last December is at stake.

This was a matter close to German Chancellor Angela Merkel's heart, but it was actually already obsolete. First of all, it was a mistake to rush it through just before President Joe Biden took office. Secondly, Beijing's new aggressive attitude cannot be curbed with such deals. Only if the EU and the US build a common front will they be able to do enough damage to the Chinese economy that Beijing might be coaxed into compromise.

Democratic values back on the agenda

What also follows from the US government's new line is that NATO will have to become more political. French President Emmanuel Macron had already made this clear in his 2019 speech warning that the alliance was almost "brain dead". But it is not so easy to do, as it would require a radical change of course. Instead of organizing troop maneuvers, the alliance's member states would have to develop strategies for counteracting Russian expansionism and rearmament plans.

Blinken has also put the defense of democratic values back on the agenda. No more presidential hobnobbing with the small and great dictators of the world. Once again, the US is calling for states to take a stand against human rights violations and the undermining of democracy. The EU could start by speaking up against some of its own member states, as well as NATO partner Turkey.

On the one hand, EU governments will be relieved about the return of joint cooperation with the US; on the other, they will also have understood that the coming years might not necessarily be comfortable and this partnership comes at a tangible political price.