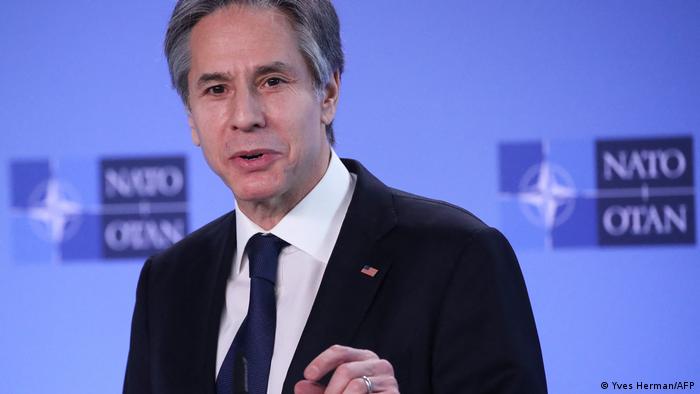 At a press conference, Secretary of State Antony Blinken told NATO Secretary General Jens Stoltenberg the US wants to 'revitalize the alliance'

The US wants to "rebuild partnerships, first and foremost with NATO allies," US Secretary of State Antony Blinken said on Tuesday during his first visit to Europe since taking office.

"I'm here today in part to share some of our initial thinking with our NATO allies," Blinken told NATO Secretary-General Jens Stoltenberg in opening remarks.  "But maybe even more important, I'm here to listen and consult because that is what allies do."

Blinken is set to meet 29 foreign ministers from the NATO alliance countries during the two-day meeting as part of a European visit seeking to revamp trans-Atlantic relations under US President Joe Biden.

"I've come here to express the US' steadfast commitment [to NATO]... We want to revitalize the alliance," the new US secretary of state told reporters.

Stoltenberg, meanwhile, has said he hopes NATO leaders will be able to negotiate a range of topics from climate measures to more sustainable funding of military operations.

High on the agenda is also the future of NATO's 9,600-strong mission in Afghanistan.

Blinken also said he would warn his German counterpart Heiko Maas of possible sanctions over the Nord Stream 2 gas pipeline to Russia at their first face-to-face meeting.

Speaking in Brussels, Blinken said "President [Joe] Biden has been very clear in saying that he believes the pipeline is a bad idea. Bad for Europe, bad for the US."

Blinken said that the pipeline, whose construction is almost complete, was "in contradiction to the EU's own energy security goals" and could "undermine" the interests of Ukraine, Poland" and other allies.

"I'm sure I'll have an opportunity to reiterate that, including the law in the United States, which requires us to sanction companies participating in the efforts to complete the pipeline," he said at a press conference at the NATO headquarters.

The controversial NordStream 2 project will double the amount of Russian natural gas exported to Germany through the Baltic Sea pipeline.

NATO allies are also hoping Washington will make up its mind on whether the US troops will stay in Afghanistan.

Former President Donald Trump had struck a deal with the Taliban to withdraw troops by May 1, slashing US troop numbers to 2,500 — the lowest level in two decades.  NATO allies still consider US presence as necessary to sustain the NATO mission.

Blinken, however, said the US was still mulling the Afghanistan question.

"Whatever the US ends up doing will be informed by the thinking of our NATO allies, which I'll take back to me after these conversations," Blinken said.

"We are united with our NATO allies in seeking to bring a responsible end to this conflict, and to remove our troops from harm's way," he added.

NATO in a quandary as it awaits Joe Biden's Afghanistan plans

Women's rights advocates worry that gains could be lost if foreign troops leave Afghanistan before real peace is achieved. The stakes are high as US officials analyze their options.