Jens Stoltenberg has described China as "a rising power" that "doesn't share our values" in an exclusive DW interview. At the same time, the NATO chief said Beijing's rise might help trans-Atlantic ties. 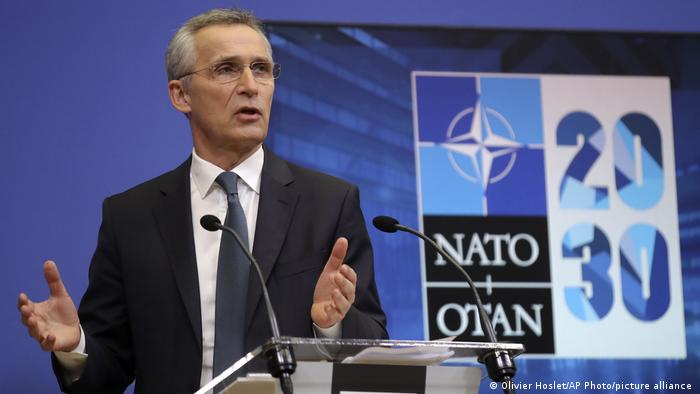 China is 'undermining the rules-based order,' yet the West must engage, Stoltenberg said

There is simply no way for the West to avoid dealing with the rise of China , NATO Secretary-General  Jens Stoltenberg told DW's Alexandra von Nahmen on Monday.

"China is coming closer to us, investing in our critical infrastructure," Stoltenberg said.

"There's no way we can avoid addressing the security consequences for our regional alliance of the rise of China and the shift in the global balance of power."

The NATO leader warned that China "doesn't share our values."

"You can see that in the way they behave in Hong Kong, how they suppress opposition in their own country but also the way they are undermining the rules-based order," he said.

Still, Stoltenberg said the competitive relationship also provided "a unique opportunity to open a new chapter in the relationship between North America — the United States — and Europe."

NATO Secretary-General on China: 'We need to deal with the opportunities and the challenges'

On Monday, the US, the EU and the UK all imposed sanctions on China, accusing Beijing of committing human right abuses against Uyghurs.

Winds of change in the US

The former prime minister of Norway said he believes that US President Joe Biden's new administration has shown "very strong commitment to trans-Atlantic unity." His comments came ahead of a NATO foreign minister meeting in Brussels, with the US Secretary of State Antony Blinken also expected to attend.

This is a marked difference to the previous four years in which former US President Donald Trump openly threatened to leave the alliance on more than one occasion.

Stoltenberg addressed a range of other issues in an exclusive DW interview, including the challenges of climate change and concerns of a new cold war.

"The melting of ice in the Arctic could lead to the heating up of geopolitical tensions between different powers," Stoltenberg admitted.

While his remarks focused on Russia, he also made note of "an increased Chinese presence" in the region.

For more from the interview, including Stoltenberg's remarks on Afghanistan, click here.

The call between the leaders comes amid a potential visit to Taiwan from House Speaker Nancy Pelosi. Xi Jinping reportedly told Joe Biden that China was opposed to Taiwan's independence as well as outside interference.