Afghanistan: Why NATO′s indecision could be a precursor to civil war | Asia | An in-depth look at news from across the continent | DW | 19.02.2021

Afghanistan: Why NATO's indecision could be a precursor to civil war

NATO has offered no straightforward statement regarding the exit of foreign troops from Afghanistan. The situation in Afghanistan, however, is clear: Kabul and the Taliban are preparing for a possible escalation. 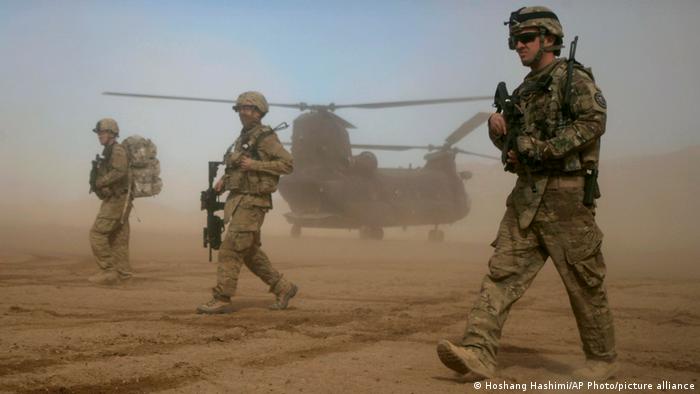 NATO made no decision on whether or when to pull out of Afghanistan, the military alliance's Secretary-General Jens Stoltenberg said on Thursday.

"We are faced with many dilemmas, and there are no easy options," Stoltenberg told journalists after talks between defense ministers in Brussels.

"If we stay beyond May 1, we risk more violence, more attacks against our own troops," he said. "But if we leave, then we will also risk that the gains that we have made are lost."

An agreement struck in February 2020 between the Taliban and the United States calls for all US and NATO forces to leave Afghanistan by May 1 in exchange for the Taliban to reduce violence and cooperate with President Ashraf Ghani's government.

However, the Taliban has increased violent attacks, and the so-called "intra-Afghan" talks with the government have gone nowhere.

NATO defense ministers also indicated that their engagement in Afghanistan "depends on conditions." They have urged the Taliban to fulfill their promises.

Stoltenberg and the Taliban agree that peace talks are the only way forward. But the path ahead is full of obstacles.

Will the US-Taliban deal survive?

Mohammad Naim, the spokesman for the Taliban's Qatar office, believes that the US-Taliban Doha agreement is still effective. "Neither side will benefit" if the accord is scrapped, he told DW.

There have been reports that US President Joe Biden is reviewing the 2020 deal, that was sealed by the administration of his predecessor Donald Trump. Some analysts have argued that the Doha deal gives too many concessions to Afghan insurgents.

Naim, however, says the agreement offers an "appropriate, reasonable and logical solution" to Afghanistan's problems.

The Taliban spokesman did not say what the militants would do if NATO decides to keep its troops in Afghanistan.

"There is no other way to solve the existing problems" than sticking to the deal, he stressed.

In an interview with DW on Thursday, German Defense Minister Annegret Kramp-Karrenbauer warned there could be further instability if NATO forces stayed past that May 1 deadline.

"What's clear is — and this is what the Taliban have announced — that with the decision not to leave the country by April 30, the threat level will rise, significantly rise — for the international troops and also for us," Kramp-Karrenbauer said.

Kramp-Karrenbauer added that the German military in Afghanistan is preparing "how to react" to the deteriorating security situation "in the appropriate way."

The Taliban have not attacked a single US soldier in Afghanistan since the Doha deal. They have, however, significantly increased their assaults on Afghan security forces and prominent Afghan citizens.

On Thursday, when NATO defense ministers were discussing how to proceed in Afghanistan, two professors at Kabul University were killed in a targeted bomb explosion. The Taliban continue to deny involvement in these attacks, but the rising violence certainly undermines the peace process.

Homeira Saqeb, a human rights activist and a member of the High Peace Council that is negotiating with the Taliban, believes that intra-Afghan talks have reached an impasse. "I hope the negotiations are not a dead end, but they have been interrupted," she told DW.

In addition to internal consultations, the Taliban have visited several times to Pakistan to discuss the ongoing peace negotiations. They have also visited Moscow, Tehran and Turkmenistan.

These visits show the complexity of these negations and the interest of neighboring countries and regional powers in the conflict. This has also delayed any potential progress in intra-Afghan negotiations. Experts say the Taliban are trying to demonstrate their influence and importance through these foreign trips.

The Afghan government is also trying to come to terms with the new situation.

US Secretary of State Antony Blinken held talks with Afghan President Ashraf Ghani earlier on Thursday to discuss how the Biden administration would review the accord's progress.

The US invaded Afghanistan in the wake of the September 11, 200, attacks in a bid to stop the country from serving as a haven for international terrorists. NATO allies and partners followed after.

Close to two decades of bloody conflict have claimed the lives of more than 40,000 Afghan civilians, and cost hundreds of billions of dollars.

It is now up to Washington if it wants to continue its engagement with Afghanistan. NATO, most likely, will follow Biden's line.