Antony Blinken has told allies that the US will not force them to make "us-or-them" decisions, but called for action against aggressive Chinese behavior. He reiterated US support to its allies. 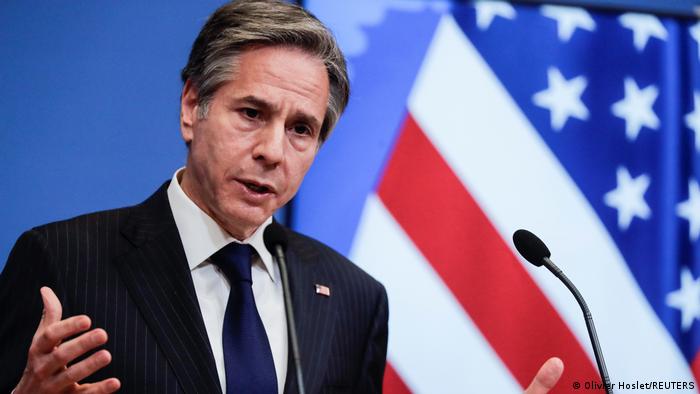 United States Secretary of State Antony Blinken delivered a keynote speech on Wednesday addressing US ties with its allies, threats from Russia and China, and global challenges on his second day of meetings with NATO partners.

He reserved his strongest words for criticism of China and called for a united position among US allies.

Blinken reiterated US support for NATO, saying, "America is fully committed to NATO, including Article 5," the mechanism that ensures mutual defense among NATO members.

He called for a reinvigoration of military capabilities and readiness, including on nuclear deterrents and digital offenses. Several US administrations have called on other NATO members to increase their defense spending to an alliance target of 2% of their gross domestic product.

Blinken also said global threats such as COVID-19 and climate change must play a central role in decisions.

In reference to the fraying of transatlantic ties under US former President Donald Trump, Blinken acknowledged that trust in the US "has been shaken to some degree over the past few years," and that it seemed to many that "the US has forgotten who its friends really are." He said the new US administration would strengthen its commitment to allies and alliances.

"There’s no question that China’s coercive behavior threatens our collective security and prosperity and that it is actively working to undercut the rules of the international system and the values we and our allies share,"  Blinken said after a meeting with NATO partners in Brussels.

"But that doesn’t mean countries can’t work with China where possible. For example on challenges like climate change and health security."

As Blinken acknowledged China's growing global power, he vowed that the US would work with partners to "close the gaps in areas like technology and infrastructure, which China is exploiting to exert coercive pressure."

"We will rely on innovation, not ultimatums," he said.

Tensions between Beijing and the West have increased recently after the European Union, the United Kingdom, the US and Canada sanctioned Chinese officials and entities over alleged human rights abuse. China responded with retaliatory sanctions.

US to 'revitalize' NATO alliance

US to 'revitalize' alliance with NATO partners

DW's William Glucroft said Blinken's speech was an attempt to draw public support in the US and in Europe for the multilateral approach that the Biden administration is returning to.

"That was a very diplomatic speech. Speaking to the American people first and foremost and to the European public," Glucroft said.

DW's Washington correspondent Carolina Chimoy said Blinken was trying to bring domestic attention to the transatlantic ties as US voters were largely focused on the pandemic and migration issues.

Blinken also called for a firm, shared position on Russia.

"Ultimately, I think what we can hope is to have a relationship with Russia that is at least predictable and stable."

"Even as we work with Russia to advance our interests and advance alliance interests, we will also work to hold Russia to account for its reckless and adversary actions."

Ahead of Blinken's speech, NATO slammed the Kremlin's domestic and foreign policies.

"Despite years of pressure and efforts to engage in a meaningful dialogue, Russia has increased its pattern of repressive behavior at home and aggressive behavior abroad," NATO's Secretary-General Jens Stoltenberg said in a press conference on Wednesday.

"In response to Russia's actions, NATO has implemented the biggest enforcement of our collective defense in a generation. We have stepped up our hybrid and cyberdefenses We will remain vigilant," Stoltenberg said.

EU and US agree to work together

After the speech, the Blinken and EU high representative for foreign affairs, Josep Borrell released a joint statement, agreeing to relaunch a bilateral dialogue on China and work in partnership to address Russia's "challenging behavior."

"They acknowledged a shared understanding that relations with China are multifaceted, comprising elements of cooperation, competition, and systemic rivalry," the statement said.

On Tuesday, Chinese Foreign Minister Wang Yi and his Russian counterpart Sergey Lavrov met in Guilin in southern China to position themselves against the "newly revived NATO alliance."

The Chinese and Russian foreign ministers said they viewed NATO's attempt at unity as an effort by Western, transatlantic powers to force their "rule-based understanding of world order on other countries."

Lavrov said he recognized the signature of what he called the "destructive nature of America's interests which rely upon political and military cold-war alliances."

Those "renewed alliances," he said,  "are destined to undermine the architecture of international rule of law set forth by the United Nations."

China's growing influence on world politics is expected to be high up on the NATO heads of state's agenda during their upcoming June summit.

US and China clash at talks in Alaska

Joe Biden outlined his foreign policy priorities in a speech at the State Department. Promising that "America is back," he discussed an array of pressing topics, from Myanmar to Moscow, via US military bases in Germany.