The new US president is striking a much different tone from his predecessor and markets are already taking notice. Further sanctions are likely imminent. 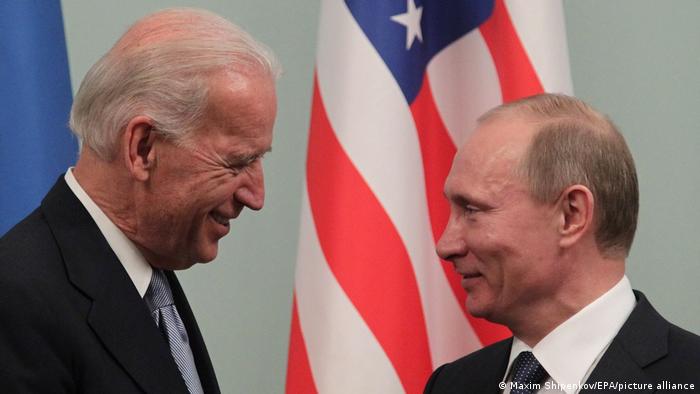 The comments came a day after a US Office of the Director of National Intelligence (ODNI) report concluded that Putin approved "influence operations aimed at denigrating President Biden's candidacy and the Democratic Party, supporting former President Trump, undermining public confidence in the electoral process, and exacerbating sociopolitical divisions in the US," in an effort to swing the 2020 US presidential election.

Will US target Russian treasury bonds?

Nevertheless, a sell-off of the rouble began shortly after Biden's remarks were made public, with the currency sliding 1.4% against the US dollar. Government bonds fell, too, as Russian financial markets continue to be haunted by the specter of new sanctions.

"There will be more sanctions coming, that is clear. The question is how severe?" said Peter Kisler of North Asset Management. Kisler noted the US could force Russia's central bank to step in to prop up the rouble by targeting Russian OFZ treasury bonds, "it would be enough for a nice drop in the rouble," he says.

Biden told ABC that he knows Putin "relatively well" and that the two had a "long talk" in January. When asked if he thinks Putin, who has been accused of poisoning political opponents, is a "killer," Biden replied, "I do."

Biden's response was markedly different from that of his predecessor Donald Trump, who famously demurred when asked the same question in 2017, choosing instead to shift blame to America's own history of ill-deeds: "There are a lot of killers," Trump replied during a Fox News interview, "You think our country's so innocent?"

Working together where they can, otherwise, sanctions

Biden said that despite his own feelings toward Putin: "There are places where it's in our mutual interest to work together. That's why I renewed the START [Strategic Arms Reduction Treaty] agreement with him. That occurred while he's doing this but that's overwhelmingly in the interest of humanity that we diminish the prospect of a nuclear exchange."

Tensions have soared between the US and Russia in recent years over hacking and election interference allegations and Washington's demands that Russia free jailed Kremlin critic Alexei Navalny.

In early March, Washington announced fresh sanctions over Navalny, who was immediately imprisoned upon returning to Moscow from Germany, where he had been treated for nerve agent poisoning in what many say was a clear assassination attempt by the Kremlin.

The sanctions were added on top of those already imposed on Moscow after its 2014 annexation of Crimea.

The US president and his wife Jill are in Britain for the funeral of the country's longest reigning monarch. Hundreds of thousands of people have filed past the Queen's coffin, lying in state in Westminster Hall.