US President Joe Biden has raised concerns over the jailing of Kremlin critic Alexei Navalny in his first phone call with Vladimir Putin. All G7 foreign ministers condemned Navalny's arrest as "politically motivated." 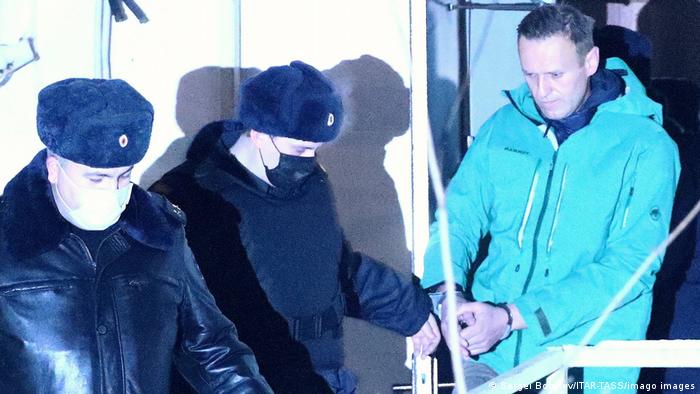 White House Press Secretary Jen Psaki earlier said that Biden would keep all options on the table as the US considers possible responses to Navalny's detention.

Navalny, an opposition politician and anti-corruption campaigner, was arrested on January 17 upon returning to Russia from Germany after spending five months recovering from nerve-agent poisoning, which he has blamed on the Kremlin.

Navalny is currently serving a 30-day stint over alleged violations of the terms of a suspended sentence stemming from fraud charges in 2014.

'A new sense of determination' at Russia protests

'A new sense of determination' for Russia protests

He is due back in court in February, and could be sent to prison for more than three years. The European Court of Human Rights ruled in 2017 that the fraud case against Navalny was unlawful and arbitrary.

Biden's conversation with Putin comes as the Russian government considers its response to massive nationwide pro-Navalny protests in more than 100 Russian cities over the weekend. More than 3,700 people were arrested across Russia in police crackdowns.

The Biden administration has called on Putin to immediately release Navalny along with the protesters.

Biden's comments came as the foreign ministers from the G7 group of nations, which includes the US and Germany, condemned Navalny's arrest as "politically motivated." They called on Russia to "adhere to national and international obligations" and release protesters who were "detained arbitrarily."

"It is deplorable that Navalny is being detained in relation to court decisions which the European Court of Human Rights determined in 2017 to be arbitrary and manifestly unreasonable," the statement said.

On Tuesday, one of Navalny's top allies, lawyer and politician Lyubov Sobol, said Navalny's Anti-Corruption Foundation and his team's regional offices would continue to operate despite ongoing criminal probes and the "arrests of our followers and allies."

Navalny aides on Tuesday also called for new protests in Moscow on Sunday outside the FSB security agency headquarters near Lubyanka Square and Staraya Square, near the presidential administration offices.

Editor's note: The opening sentence of this article initially concluded with the words "Russian President Alexei Navalny," rather than Vladimir Putin. We apologize for the error, which was rapidly rectified.

Coronavirus: Home tests will give Germany 'more freedom' 5h ago