Berlin called for Navalny to be "released immediately" after the his arrest sparked outrage in the US and the EU. Germany said Russian authorities were jailing the poisoning victim rather than the culprits. 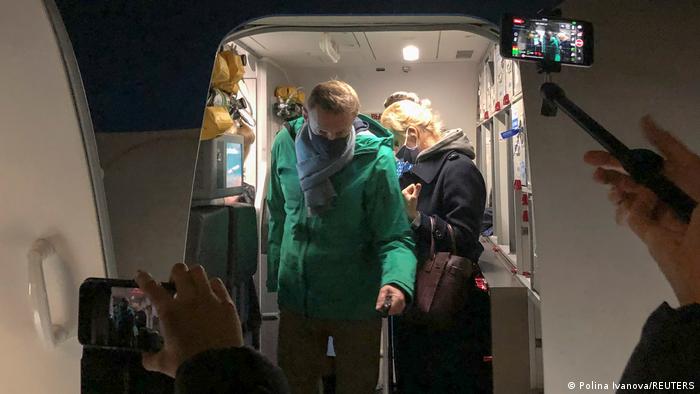 Navalny was detained at Moscow's Sheremetyevo airport on Sunday

German Chancellor Angela Merkel said Navalny's arrest violated "the principles of the rule of law," according to her spokesman Steffen Seibert.

"Russian authorities arrested the victim of a chemical weapons attack and not the perpetrators," he added.

Earlier on Monday, Foreign Minister Heiko Maas said that Russia was bound by its obligations to civil liberties and the rule of law and that these should also apply to the prominent critic of Vladimir Putin's government. His comments echoed those from several other European allies and the US.

"After his convalescence, Alexei Navalny chose consciously and of his own free will to return to Russia because that's where he feels his personal and political home is," Maas said on German public television. "That he was detained on his arrival by Russian authorities is utterly incomprehensible."

UK Foreign Minister Dominic Raab spoke out against the arrest, calling it "appalling" and saying Navalny had been "the victim of a despicable crime."

"Rather than persecuting Mr Navalny Russia should explain how a chemical weapon came to be used on Russian soil," Raab wrote on Twitter.

"I call upon the government of Russia for his immediate release and to bring those responsible for the attempt on his life to justice," he said.

US Secretary of State Mike Pompeo also condemned Navalny's arrest in a statement on Sunday.

"We note with grave concern that his detention is the latest in a series of attempts to silence Navalny and other opposition figures and independent voices who are critical of Russian authorities," Pompeo said.

Meanwhile, Russia's Foreign Minister Sergey Lavrov said in Moscow on Monday that the Western outcry over Navalny's arrest was overblown and an attempt at misdirection.

"You can feel the joy with which these comments [on Navalny's arrest] are coming out," Lavrov told reporters. "Judging by everything, it allows Western politicians to divert attention away from the deep crisis that the liberal mode of development finds itself in."

He went on to say that Navalny's case had gained international resonance artificially.

The Russian opposition politician was detained at Moscow's Sheremetyevo airport on Sunday after he flew to Russian from Germany, defying warnings of his arrest.

The anti-corruption campaigner was nearly killed in a poisoning attack in August last year. Navalny, 44, says the poisoning was ordered by Russian President Vladimir Putin. The Kremlin denies any involvement.

Experts in Germany, where Navalny was being treated, concluded that he was poisoned with Soviet-designed nerve toxin Novichok.

Russia's federal prison service FSIN said Navalny had been arrested over "multiple violations" of a 2014 suspended sentence for fraud charges. The opposition leader "will be held in custody" until a court ruling, they said.

European Commission President Ursula von der Leyen issued a statement on Monday condemning the arrest, calling for Navalny's release, and saying that "detention of political opponents is against Russia's international commitments." She called again for an investigation into his poisoning and said the Commission "will monitor the situation closely."

European Council President Charles Michel had made a similar appeal on Sunday.

Reacting to Navalny's arrest, rights group Amnesty International said the Russian politician had become a prisoner of conscience. It accused Russian authorities of waging "a relentless campaign" to silence him.

"Navalny's arrest is further evidence that Russian authorities are seeking to silence him. His detention only highlights the need to investigate his allegations that he was poisoned by state agents acting on orders from the highest levels," said Natalia Zviagina, Amnesty International's Moscow Office Director.

Call for EU sanctions against Moscow

"The detention of Navalny is another attempt to intimidate the democratic opposition in Russia. A swift and unequivocal response at the EU level is essential. Respect for citizens' rights is the cornerstone of democracy," Morawiecki wrote on Twitter.

"I appeal to the authorities in Russia to release the detainee immediately," he said.

In September, Morawiecki suggested that Russia was a "hostile regime," after Germany said Navalny had been poisoned with a Novichok nerve agent.

"We ask for his immediate release. And we expect his rights to be respected", Luigi Di Maio tweeted.