EU holds off on fresh sanctions over Russia's arrest of Navalny

The bloc condemned Russia's detention of longtime Kremlin critic Alexei Navalny but stopped short of backing new sanctions. The dissident is facing jail time for breaching the conditions of an earlier sentence. 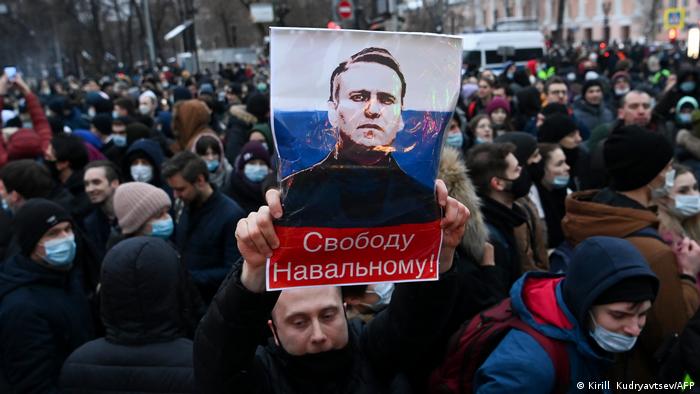 European Union foreign ministers meeting in Brussels on Monday decided to hold off on slapping new sanctions on Moscow in response to the arrest of Kremlin critic Alexei Navalny.

The talks came two days after a police crackdown on Navalny's supporters in which more than 3,500 people were detained during demonstrations that attracted tens of thousands of people.

EU foreign policy chief Josep Borrell said the bloc's 27 members had condemned the mass arrests and agreed that Navalny's detention was "completely unacceptable." But ministers ultimately decided imposing fresh sanctions was "premature," according to one diplomat cited by AFP.

Borrell is set to visit Moscow early next month to press the Kremlin over Navalny's arrest and discuss the EU's concerns.

"This will be a good opportunity to discuss with my Russian counterpart all relevant issues, to pass clear messages on the current situation," Borrell said.

Ahead of the meeting, German Foreign Minister Heiko Maas called for those who demonstrated peacefully to be "released immediately."

"The Russian constitution gives everybody in Russia the right to express their opinion and to participate in demonstrations," he said.

Lithuanian Foreign Minister Gabrielius Landsbergis said Monday that the EU "needs to send a very clear and decisive message that this is not acceptable."

What action could be taken?

Any binding decision on sanctions could not have been taken at Monday's meeting in any case, as such a move would have to be signed off by EU leaders and they will not meet again until March.

Navalny will appear in court on February 2, and Brussels is expected to weigh its response on whether the Kremlin puts him behind bars for an extended term. Navalny is facing three-and-a-half years, allegedly for breaking the conditions of an earlier suspended sentence.

Poland has already said that it will back a series of restrictive measures against Moscow. The EU has a new, streamlined tool for blacklisting foreign officials over human-rights violations.

"The only way to [avoid conflict] is to force international law to be observed. The only way to do this without rifles, cannons and bombs is via sanctions. So we are ready to help build consensus on that issue," Polish President Andrzej Duda told the Financial Times in an interview.

The EU already has economic sanctions in place on Russian energy, financial and arms sectors over the annexation of the Crimea peninsula in 2014. The bloc has also imposed sanctions on Russian officials in response to Navalny's poisoning in August.

"The EU foreign ministers are not allowed to dodge this once again and stop at general appeals," said Weber, a senior German conservative and a member of the CSU, the Bavarian sister party of Chancellor Angela Merkel's Christian Democrats.

EPP leader on US Capitol riot: 'Defend our institutions'

"The EU has to hit where it really hurts the Putin system — and that's the money," he said, speaking to Germany's Redaktions Netzwerk Deutschland newspaper group. The EU should cut financial transactions from Putin's inner circle, he added.

Weber said the German government should not rule out stopping the Nord Stream 2 pipeline, which is meant to double natural gas deliveries from Russia to Germany.

Germany has faced critcism in the European Parliament for refusing to cancel the project despite repeated human rights violations committed by the Russian government.

MEPs last week passed a resolution calling for the pipeline to be halted over Navalny's arrest.

A German government spokesman declined to comment on whether Merkel backs new sanctions against Russia.