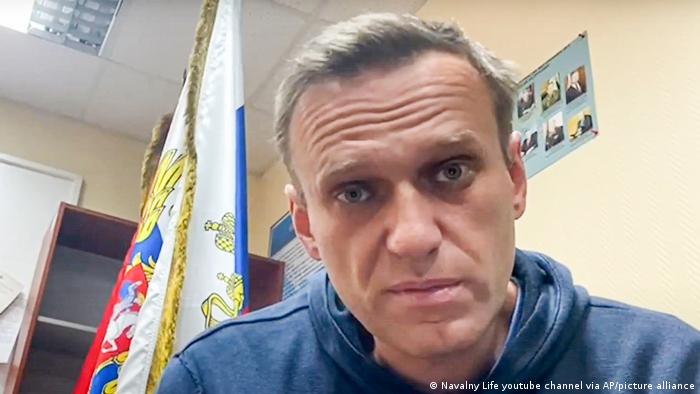 Navalny was arrested Sunday when he landed in Moscow, after spending several months in Germany, where he had received treatment for poisoning. German doctors who treated Navalny concluded he was poisoned with a Novichok agent.

His airport arrest has drawn widespread Western condemnation, with the US, the European Union, France and Canada all calling for his release, and prompted Baltic states to urge the EU to impose sanctions on Russia.

"We hear these statements, but we cannot and don't plan to take these into account," Kremlin spokesman Dmitry Peskov told reporters.

"This is about a Russian citizen not complying with Russian law. This is an absolutely domestic matter and we will not allow anyone to interfere in it," he added.

On Monday, Navalny was rushed to a makeshift court in the police precinct where he had been detained and there, he was handed a pre-trial detention sentence of 30 days, for alleged fraud.

The 44-year-old has said the charges are baseless and politically motivated.

Peskov insisted that Navalny had genuine questions to answer to Russian justice, regarding the violation of his parole conditions for a suspended prison sentence.

Following the snap trial, Navalny was transferred to Moscow's Matrosskaya Tishina jail, one of the country's best guarded detention centers.

In response to his arrest, Navalny's allies have called on Russians to gather in Moscow this Saturday and march towards the Kremlin.

Demonstrations in Moscow are currently banned due to coronavirus restrictions.

A leading Kremlin critic, the 44-year-old anti-corruption advocate has been able to gather large-scale street protests against Putin, most recently in the summer of 2019.

Peskov said the Kremlin was concerned by Navalny's calls for his supporters to stage mass protests. "These calls are troubling," he said. But when asked if the Kremlin was worried that such protests would materialize, Perskov said "absolutely not.”

"We are not a body that can assess this, but undoubtedly this could be grounds for analyses on the issue of calls for illegal actions," he added.