Tens of thousands of Russians have taken to the streets to protest the arrest of Alexei Navalny. Pressure on President Vladimir Putin is growing, but can demonstrators threaten his grip on power? Juri Rescheto reports. 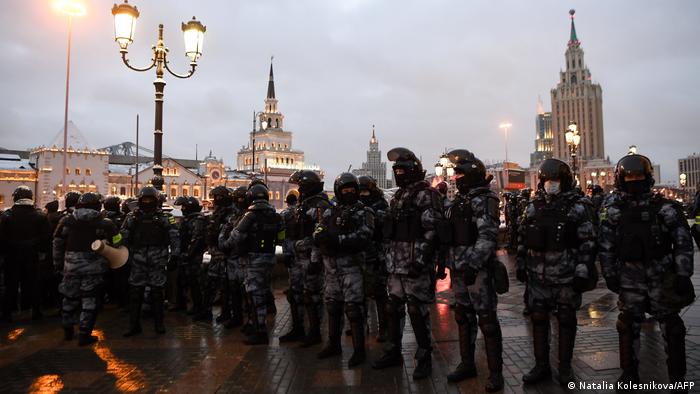 The Kremlin may be on the defensive, but can mass protests really threaten Putin's grip on power?

Most observers interpret the severity of the response as an overreaction, a sign of the twitchy mood in the Kremlin. But just how dangerous are these rallies for President Vladimir Putin? Could the new wave of protests actually topple him?

The mass protests currently playing out on the streets are not enough to trigger a change of power, according to Mikhail Vinogradov, head of the St. Petersburg Politics Foundation. He says the crucial factor is whether the elites — senior officials close to the president, high-ranking military officers and the intelligence services — start to "wobble."

Political turbulence in Russia generally results from a split within the organs of power, Vinogradov tells DW, and "at the moment, that kind of split does not exist." The think tank founder says that current protests are comparable to those ahead of Moscow's city parliament elections in the summer of 2019 — protests that failed to bring about political change.

Kremlin on the defensive

Independent political analyst Abbas Galyamov, by contrast, believes the current demonstrations have a greater explosive force than that. In an interview with DW, Galyamov said police tactics were akin to the defense of a besieged medieval fortress with the security forces, "looking as if they had pulled up the drawbridge over the moat and were holed up behind the fortifications waiting for the enemy to attack."

That shows, according to Galyamov, that the Kremlin sees itself on the defensive. The political scientist said police officers appeared demotivated and surprised despite the tough crackdown, while the Kremlin critics, on the contrary, seemed highly motivated. "And because the country's rulers are on the defensive, the next protests could be even bigger," added Galyamov.

And perhaps more violent, at least according to Ilya Grashenkov, director of the private, Moscow-based Russian Center for the Development of Regional Politics, who says the protests "go deeper" this time around. He adds that the core of protesters are significantly "more active" than in the past: "They are consciously running the risk of being detained or beaten [by the police], yet they are taking to the streets nevertheless. Moreover, the majority actually sympathize with Navalny and are calling for his release. This time, the protests are culminating in a political demand."

The elites will decide

Nevertheless, Abbas Galyamov is of the opinion that Putin will not be chased out of office. Like Mikhail Vinogradov, Galyamov believes the role of the elites will be pivotal: "Of course, the demonstrators are not going to storm Moscow's Red Square one day and throw Putin out of the Kremlin. But the protests show that the people are dissatisfied with the elites. And one day that will also influence the loyalty of the elites [vis-à-vis the Kremlin]. Then they, too, will rebel."

Even if the protests do not have any concrete effect and Navalny is not released, the demonstrations are increasingly politicizing the country and influencing possible Putin voters.

This autumn, Russians will go to the polls to elect members of Russia's parliament, the Duma. Political analysts are not ruling out that so-called "smart voting" — a strategy devised by Alexei Navalny — will pay off. Its goal is to divert as many votes as possible away from the governing United Russia party.

Navalny is urging Russians vote for a myriad of other parties — no matter how small, or insignificant — rather than United Russia. For Navalny, only one thing matters: Ensuring that Putin's party gets as little support as possible and is ultimately voted out of office.