China, Russia accuse US of interference with sanctions

In a show of unity, the foreign ministers of China and Russia have met to condemn Western sanctions against them over human rights. 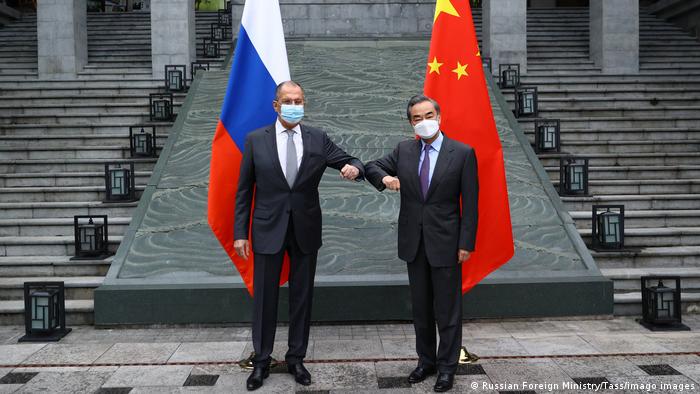 Sergey Lavrov (left) and Wang Yi met in Guilin, China for their talks

The foreign ministers of both China and Russia have condemned Western sanctions against them and accused the US of political interference.

Chinese Foreign Minister Wang Yi and his Russian counterpart Sergey Lavrov both rejected outside criticism of their authoritarian systems.

What the ministers said

Speaking after the meeting on Tuesday, the pair said China and Russia were working to further global progress on issues such as climate change and the coronavirus pandemic.

Wang sharply criticized coordinated sanctions against Beijing by the EU, Britain, the US and Canada over human rights abuses against Uyghur Muslims in China's far western Xinjiang region.

"Countries should stand together to oppose all forms of unilateral sanctions," Wang said. "These measures will not be embraced by the international community."

Lavrov said Russia and China both viewed the US as seeking to rely on Cold War military alliances to undermine the "international legal architecture."

Earlier this month, Russia said sanctions imposed by the EU and US over the poisoning of Kremlin critic Alexei Navalny would have a souring effect on Russia's bilateral relations with both.

Lavrov said Tuesday that Russia no longer had relations with the EU after Brussels had "destroyed them." However, the top diplomat added that Moscow would be ready to work with the EU "if and when the bloc is ready to remove this anomaly in relations."

The EU had not sanctioned China significantly since an arms embargo in 1989 after the Tiananmen Square pro-democracy crackdown.

The sanctions came ahead of meetings between the US and NATO members this week, with US Secretary of State Antony Blinken seeking to repair relations with NATO members.

China hits back at EU

China had already responded on Monday by imposing sanctions on 10 European individuals and four institutions that it said had damaged China's interests.

Beijing said those targeted had "maliciously spread lies and disinformation," denying charges that more than 1 million people have been locked up in prison-like reeducation camps.

The sanctions barred the European individuals from visiting mainland China, Hong Kong and Macao, and also banned them from engaging in financial dealings with Chinese institutions.

Russia and China are reaching for the moon, with plans to construct a "complex of experimental research facilities" there as they strive to expand their presence in space.

COVID-19 vaccines are scarce in Europe, and China is using that to its advantage. There's no misunderstanding the effect of sending 1 million doses to Serbia, writes DW's Miodrag Soric.