COVID-19 vaccines are scarce in Europe, and China is using that to its advantage. There's no misunderstanding the effect of sending 1 million doses to Serbia, writes DW's Miodrag Soric. 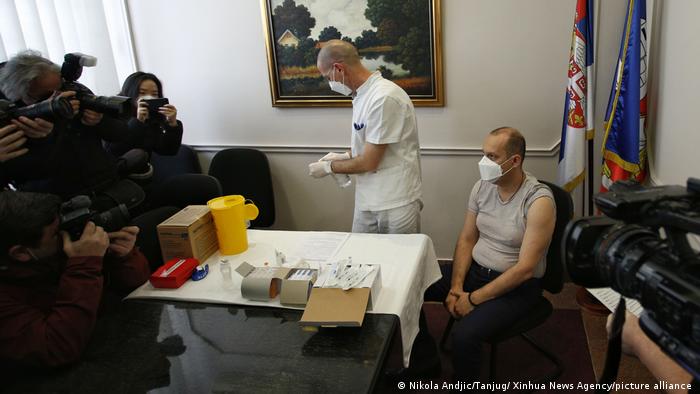 For autocrats, the best truths are the truths they invent themselves. When the coronavirus hit Europe early last year, Serbia's president, Alexander Vucic, was quick to play it down.  Then when he discovered that the situation was actually dangerous, he initiated a lockdown stricter than almost anywhere else in Europe. He declared victory over the coronavirus a few months later, which coincidentally was just ahead of the country's upcoming parliamentary elections. Go figure.

The Serbian president has once again taken up the fight against COVID-19, and the country's government-friendly media is making sure that everyone knows it.  They're also reminding everyone that Serbia is doing better than the rest of Europe — all thanks to Vucic's wise leadership!

The protector of the people

If the pandemic weren't so serious —deadly serious, in fact — it would actually be funny to watch all of the missteps and made-up figures the government has issued. A walk through the Serbian capital almost gives one the impression that everything is just fine, that COVID-19 sidestepped Serbia on its way elsewhere.  Cafes and restaurants are open for business. People continue to crowd into local shopping malls. Most of them seem to have forgotten their masks. And those wearing them are doing so incorrectly, with their noses fully exposed.

The million-dose shipment from China and promises of more vaccines from Russia have bolstered the spirits of many in Serbia. This sentiment hasn't been lost on the Serb leader himself, who's been quick to tell anyone and everyone about his COVID-related accomplishments.

He continues to portray himself as the protector of the Serbian people, a selfless civil servant working around the clock to secure as much of the needed vaccines as possible.

But his tone and style in front of the cameras are factually wrong, not to mention highly inappropriate. He talks about a "war" among countries to stockpile doses of the coronavirus vaccines. In doing so, his goal seems to be to portray himself as the hero of the people.

Some leaders are just plain narcissists who do what they do to feed their egos. It becomes embarrassing when they, in the process, look down on other countries as if they were somehow better.

Serbia has no reason to boast or put itself on a pedestal considering the fact that its health system is in utter disarray, with many holding the president as primarily responsible.  As far as Belgrade's official coronavirus statistics are concerned, there's no one willing to put any faith in those numbers.

The Russian and Chinese vaccines do not have regulatory approval in Western countries. And that's why the difficulties the EU and Washington are that much harder to take. These delays will cost lives, and governments across Europe are under pressure to deliver for their citizens.

Yet, that cannot be allowed to happen at the expense of others within the EU. Solidarity within the bloc is non-negotiable. Germany, as the richest and biggest member of the EU, won't move to the head of the line if doing so comes at the expense of smaller EU countries.

Serbia isn't a member of the EU, but together with other western-Balkan countries it has received millions from Brussels to fight the pandemic. That's a fact that Belgrade often happily ignores.

One would have to be shockingly naive to think that the vaccines from China come with no strings attached, that they are only sent for humanitarian reasons or as an apology from the country where the pandemic is thought to have started.

China is a country that thinks long-term. While it has had difficulties buying its way into companies in Germany, Britain and the United States, it can do so much more easily and cheaply in places like Serbia or Hungary. In doing so, those countries become both economically and politically dependent on China -- as has been the case in Latin America and Africa in the recent past.

The fact that the West is sitting around and allowing this to happen is an error that can and must be criticized. The communist government's standing in the region is on the rise for all to see. By delivering vaccines, it's not only promising help but also providing it in a very practical way.

It would be a great strategic mistake if the West were to allow Russia and China to increase their influence in the western Balkans. At the very least, the EU should support Montenegro'sefforts to join the bloc. The people there have already overthrown parts of the country's communist past.

If the goal is showing the promoting democracy pays off, then Montenegro is a place where the EU can make that point for the region.

Estonia hit by cyberattacks after Soviet memorial removal 17m ago