Vaccination delivery delays have caused several countries in Europe to delay or even halt their vaccination programs. DW breaks down which areas have been hit the hardest. 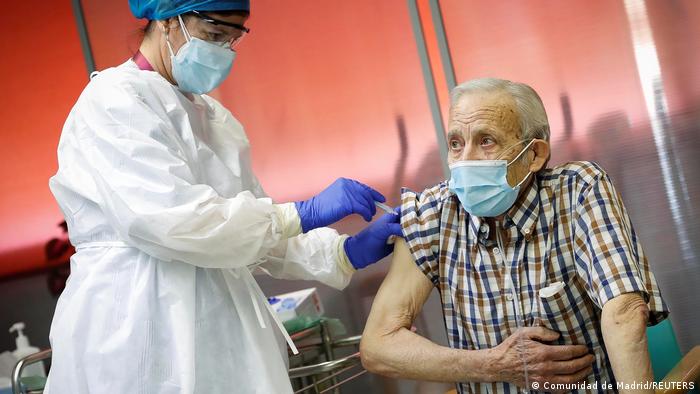 Just over a month after the first vaccine was doled out in Madrid, the Spanish capital is halting initial doses due to shortages

The European Union is embroiled in an escalating dispute with pharmaceutical company AstraZeneca over planned curbs in vaccine deliveries. Vaccines provided by BioNTech-Pfizer are also being supplied to European countries at levels lower than anticipated.

The shortages are already having an impact on the ground, with countries forced to either halt giving out first doses or to delay appointments.

DW takes a look at which regions are halting their programs and who will be impacted the most.

All first doses of the COVID-19 vaccine will be reportedly suspended in Paris and the surrounding area starting on February 2.

The source added that second doses would continue to be distributed in the greater Paris region.

The northern Hauts-de-France region announced similar measures, with officials saying that first doses that were supposed to take place in February will now take place in early March.

Over a third of France's population live in the areas that have announced delays to the country's vaccination program.

Nearly all elderly residents in nursing homes have already received the vaccine and likely won't be impacted by the delays.

But the delays will impact health care workers and people over 75 years of age, who were next in line to receive a first dose.

Vaccine shortages have also hit Spain — with the Madrid and Cantabria regions halting their vaccination programs.

Both regions said they would use the remaining supplies to dole out second, followup shots.

In Catalonia, health officials warned that the vaccine supplies for Barcelona and the surrounding region would run out on Friday.

The shortages in Catalonia mean that 10,000 people who received the first dose will not get their second dose 21 days later as is currently planned, said the region's public health chief Josep Argimon.

He added that the delay shouldn't be a problem "in theory," as initial EU guidelines called for the second dose to be administered up to 45 days after the first. New advice issued Thursday by the European Medicines Agency, however, said the BioNTech-Pfizer vaccine's second dose should be given three weeks after the first.

Madrid's regional vice president Igancio Aguado said the supply issues would likely make it impossible to meet the Spanish government's goal of vaccinating 70% of the population by summer.

In the eastern state of Brandenburg, health authorities pushed back first-dose appointments that had been originally slated for the end of January.

Over 2.1 million people out of Germany's 83 million population have received a first dose of the vaccine.

Germany's vaccine drive has so far concentrated on people over 80 years old, care workers and health care workers with a high risk of exposure to COVID-19.

The delays mean that people in their 70s and younger, as well as those with health conditions that put them at higher risk, will have to wait longer for the jab.

Chancellor Angela Merkel's government and state leaders have faced growing criticism over the slow rollout of the country's vaccination drive.

Portugal, which currently has one of the highest infection rates in the world, has also been forced to alter its vaccination drive plans due to shortages.

The government said it will extend the first phase of the country's vaccination plan into April.

Delivery delays mean the country will receive half of its expected doses only in March.

Portuguese officials expect frontline health workers and others who have top priority will all be fully vaccinated by April — two months later than originally planned.

How to set up smarter vaccination campaigns

The Dutch government is also expecting to struggle to stay on track with its vaccination schedule.

With the Netherlands placing an early bet on the AstraZeneca vaccine, the rollout to the general population is expected to take even longer than planned.

The Netherlands has faced criticism as one of the last countries in the European Union to start its vaccination program.

Commission President Ursula von der Leyen spoke at Davos after a row between the EU and drugmaker AstraZeneca. But South African President Cyril Ramaphosa hit out at what he branded 'vaccine nationalism.'