Coronavirus: Will French schools stay open? | Europe | News and current affairs from around the continent | DW | 24.01.2021 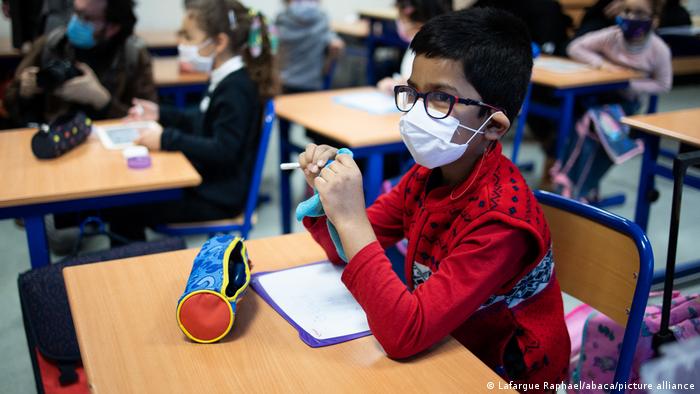 Face masks are compulsory for all students in French schools

It's the little indications that are causing many French people to worry. In the media, more and more experts are warning that a third wave of COVID-19 is on its way. There have also been comments from government circles that France needs to be ready for anything.

The country has already gone into strict lockdown twice, and people were only allowed to leave their homes for reasons that were urgent and necessary. Now, an increasing number of people are calling for a third lockdown, citing the dangers posed by virus mutations and the infection rate, which has begun to rise sharply once again.

A particularly tricky aspect of deciding whether or not to impose another lockdown is the question of whether the roughly 12 million French schoolchildren will continue to congregate in classrooms. In the early days of the pandemic in March, the government kept the schools shut for weeks — with dramatic consequences.

"We completely lost contact with some pupils from the poorer neighborhoods," said Guislaine David from France's largest teachers union, SNUipp-FSU. "The government reopened schools in May, and completely reopened them in June, but some pupils didn't come back then before the summer vacation. They've lost an awful lot of time." 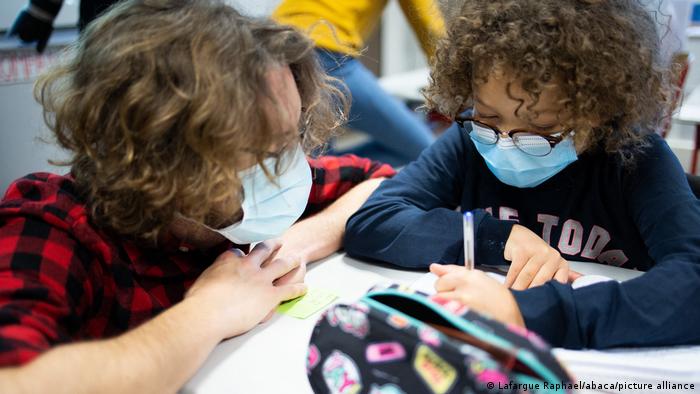 Some students did not return to class until September

The government did things differently when the second lockdown was imposed in the autumn. Public life was shut down again, but schools remained open. Despite this apparent risk, the number of new infections dropped dramatically.

Since then, remote learning in France has been restricted to certain secondary school classes. Even there it's only available as part of a combination of remote and face-to-face teaching. Expectations of this education model should not be too high, said Friederike Riemer, who teaches German at a large secondary school in Montlucon, a rural area in central France.

"We teachers are teaching normal lessons to one group in school, and the pupils in the other group sit at home that week and have to learn the material by themselves," Riemer told DW. "In practice, many of them struggle to work through it on their own."

There's no chance of Riemer's school livestreaming lessons to pupils at home by video — too many of the teachers are against it. Riemer believes the vast majority of teaching staff, parents and pupils oppose closing the schools. The fact that her school has had several cases of COVID-19 hasn't changed their minds.

Education Minister Jean-Michel Blanquer is proud of the fact that French children have spent more days in school during the pandemic than those of any other European country. The government has now made hygiene regulations for schools even stricter, in the hope of maintaining this lead.

All pupils in France, from elementary school onward, have to wear masks on the school premises and in class. For the last week, pupils have been told to stay with the same table groups in the school canteen during lunch. Mealtimes have also been extended to enable social distancing — though, as Riemer pointed out, "it is very difficult to maintain the minimum distance when more than 100 students are waiting in an aisle for 45 minutes until they get their food."

Until recently, students were still playing indoor sports with face masks; these have now been canceled. The government has also announced that it will be increasing the number of COVID-19 tests in schools to 300,000 a week. Pupils and staff will now be systematically tested as soon as an institution registers three positive cases. 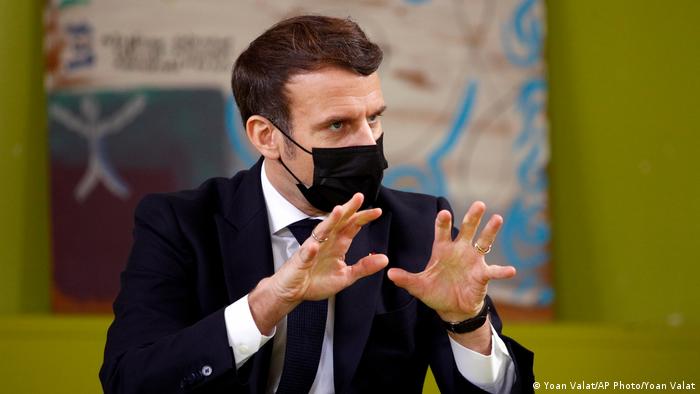 In the coming days, President Emmanuel Macron may well have to decide whether to initiate a third lockdown

The testing program has been voluntary until now, and the newspaper Le Monde has reported that participation among senior pupils has been low. Riemer has also noticed few people lining up for the tests. "In the week before Christmas we had laboratory staff in school for two days offering free tests. Out of our 1,800 pupils and 300 teachers, only 150 people got themselves tested," she said.

The initiative Ecoles et Familles Oubliees (Forgotten Schools and Families) has criticized the heightened measures, calling them insufficient. The group, which claims to represent many parents of pupils at all levels and all types of school, wrote an open letter to President Emmanuel Macron at the beginning of the year calling for the Christmas vacation to be extended. The initiative did not succeed.

Guislaine David, the spokesperson for the teachers union, believes that the majority of society does not support the demand for school closures. Instead, her union is also calling for stricter hygiene standards.

"The current policy is that you have to have three people who've tested positive before a class is sent into quarantine. We've told the ministry that the class needs to be quarantined as soon as there's one positive case, and all the pupils in the class who had contact with the positive case must be tested," she said.

In its rejection of school closures, the union is in agreement with the education minister. "At this stage, closing all the schools is out of the question," said Blanquer said in a recent radio interview. He said that, at present, around 30 out of about 50,000 schools across France have been shut and 100 individual classes are in quarantine because of COVID-19.

"We are not in the middle of an explosion of cases," he said, remaining optimistic. And so far, the doctors advising the French government have not disagreed. In addition to concerns about pupils from educationally disadvantaged backgrounds, who risk falling behind, the government has also argued that such a move would have serious economic consequences. "If we close the schools, it also disrupts the economy," said French Prime Minister Jean Castex.

COVID-19 vaccination: France aims to make up for lost time

France plans to speed up its COVID-19 vaccination campaign, as it is lagging behind other European countries. The main problem is logistics. But there is another obstacle.

French chefs struggle to reinvent themselves amid uncertainty

Shutdowns due to COVID-19 have dealt a heavy blow to restaurants in France, the birthplace of haute cuisine. As chefs try to adapt, some are wrestling with fundamental questions about the live fine dining experience.