The government in Rome has said it's planning legal action against pharmaceutical companies Pfizer and AstraZeneca over delays to the delivery of new coronavirus vaccines. The European Union has made a similar threat. 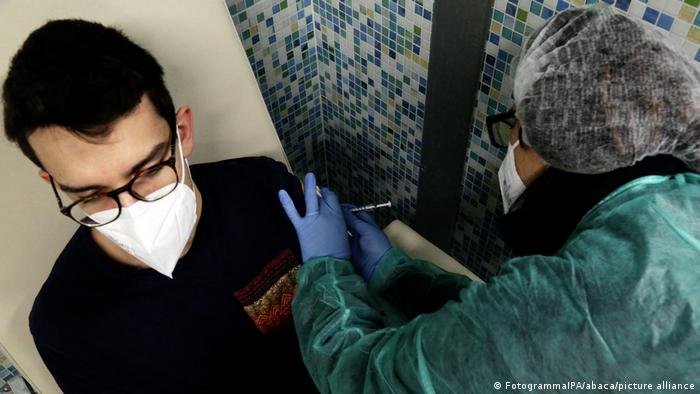 Italy will take legal action against Pfizer Inc. and AstraZeneca over delays in deliveries of COVID-19 vaccines to secure agreed supplies rather than seek damages, Foreign Minister Luigi Di Maio said on Sunday.

"We are working so our vaccine plan program does not change," Di Maio said on RAI state television.

The news follows announcements by both pharmaceutical giants of delays and difficulties in delivering the promised number of doses due to issues with supply chains.

Why are some medical workers hesitant?

Asked why he thought the pharmaceutical companies had been forced to announce reductions, Di Maio said he believed they had simply bitten off more than they could chew.

"We are activating all channels so the European Commission does all it can to make these gentlemen respect their contracts," he said.

On Saturday, Prime Minister Giuseppe Conte said the delays in vaccine supplies were "unacceptable" and amounted to a serious breach of contractual obligations. He added that Italy would use all available legal tools.

"We plan to make the pharmaceutical industry respect signed contracts," Michel told France's Europe-1 radio, adding that EU officials "pounded our fist on the table" with Pfizer last week to make sure the delays end by this coming week.

Michel did not mention possible sanctions, but noted that the EU would insist on transparency about the reasons behind the holdup.

Michel acknowledged that "it will be difficult" for the EU to meet its goal of vaccinating 70% of the adult population by the end of summer due to logistical challenges and the slow rollout across the bloc so far.

The EU has signed six vaccine contracts for more than 2 billion doses, but only the BioNTech-Pfizer and Moderna vaccines have so far been approved for use.

Stories of heartbreak in Italy

After the manufacturing partners BioNTech-Pfizer announced delays in deliveries last week, British-Swedish firm AstraZeneca on Friday also said that initial deliveries will fall short on supply because of a production error.

The European Medicines Agency is expected to assess the AstraZeneca vaccine at the end of the week. The vaccine, developed together with Oxford University, is already in use in the United Kingdom.

Health Minister Jens Spahn has said the government has purchased a new drug to help fight COVID-19 amid a vaccine shortage. Germany will be the first EU nation to use the medicine, which was also given to Donald Trump.

Spahn: 'The crisis is at its peak'

EU, US impose sanctions on Russia over Alexei Navalny poisoning 41m ago