Germany has said there was a lack of data regarding the effectiveness of the AstraZeneca vaccine for older people. The UK-based firm is also in the midst of a dispute with the EU over reneging on its deal with the bloc. 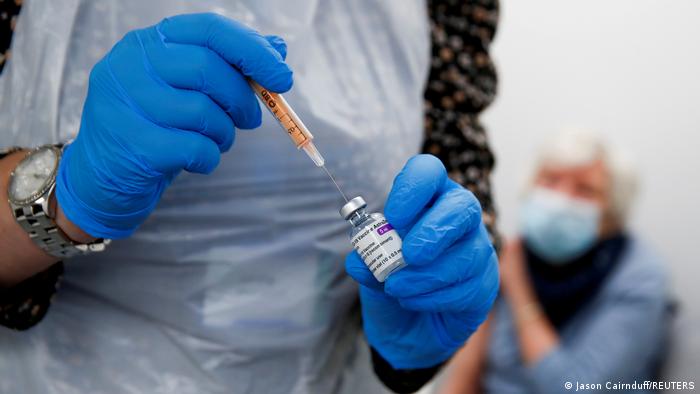 Germany's vaccine commission STIKO said on Thursday that AstraZeneca's COVID-19 jab should only be administered to people aged 64 and under.

The panel of medical experts cited a lack of data regarding the vaccine's effectiveness for older people.

"There is currently insufficient data to assess the efficacy of the vaccine for persons aged 65 years and older," the scientific committee said in the resolution made available by the German Health Ministry.

"The AstraZeneca vaccine, unlike the mRNA vaccines, should only be offered to people aged 18-64 years at each stage," it added.

A spokesperson for the UK-based company said the latest clinical trial data for its vaccine "support efficacy in the over 65 years age group."

Johnson also gave his backing to the vaccine jointly developed with the University of Oxford. He said he did not agree with the German assessment of the vaccine.

"Our own authorities have made it very clear that they think the Oxford AstraZeneca vaccine is very good and efficacious," Johnson said.

On Wednesday, the European Union aired its frustrations with AstraZeneca, suggesting the pharmaceutical giant was reneging on its agreement to supply the bloc with vaccine doses.

The dismay with the Anglo-Swedish firm comes as Germany admitted it faces a shortfall of vaccines that could continue until April, Health Minister Jens Spahn said on Thursday.

As a result, Spahn said there would be a meeting on Monday between Chancellor Angela Merkel, the nation's 16 state premiers, and senior figures within the pharmaceutical industry.

Spahn had called for such a summit because the government is "working on the assumption of at least 10 more hard weeks due to the vaccine shortage," he wrote on Twitter.

Germany's vaccination process was dealt a blow last week when AstraZeneca slashed its expected initial deliveries of doses to EU countries by around 60%.