Fact check: Is AstraZeneca in breach of its EU contract? | Europe | News and current affairs from around the continent | DW | 27.01.2021 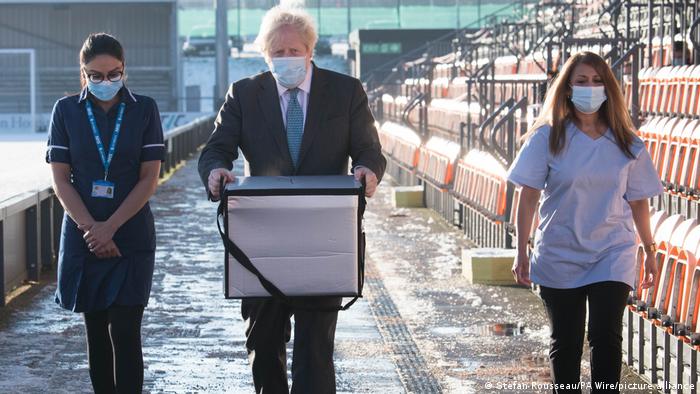 There are claims that the UK is getting preferential treatment in the delivery of AstraZeneca's vaccine.

The EU is set to approve the AstraZeneca coronavirus vaccine at the end of this week. But trouble is already brewing because the British-Swedish company has announced delays in the delivery of the 400 million doses ordered by the European Commission.

DW checks some of the facts:

How can delivery bottlenecks occur when the EU paid millions to boost AstraZeneca's production?

DW fact check: Not verifiable. The European Union seems to be as confused about this as the public. AstraZeneca has denied EU claims that it had pulled out of a follow-up meeting planned for later on Wednesday with the EU following Monday's inconclusive talks.

The EU had been expecting 80 million doses by the end of March. As things stand, the company will be able to deliver only 31 million.AstraZeneca informed the EU it was falling behind on its supply target because of production problems at one of its European plants.

The company's response to a DW request for comment was equally vague. "While there is no planned delay in the start of delivery of our vaccine, initial volumes will be less than originally expected due to reduced yields at a manufacturing site within our European supply chain," the company wrote in an email.

The EU is particularly irritated because it had paid AstraZeneca hundreds of millions of euros in advance in order to expedite production ahead of the vaccine's official approval. European Commission chief Ursula von der Leyen said that "Europe invested billions to help develop the world's first COVID-19 vaccines and create a global demand." The onus, she said, was now on the companies to "deliver and honor their obligations." There is currently no independent information available to explain AstraZeneca's delivery bottlenecks in Europe.

Is the UK receiving its deliveries of the vaccine without any problems?

DW fact check: True. There are currently no delivery bottlenecks in the UK. The AstraZeneca vaccine has been administered there since the beginning of January. This has prompted the EU to ask whether the contingent it had ordered has ended up in the UK, fueling claims of preferential treatment for Britain.

MEP Peter Liese, a health spokesman for the Group of European People's Party in the European Parliament, says the company's explanations are implausible. "According to the company, the supply chains are separate entities. But that's not true. Until a few days ago, the vaccine destined for the UK was still being bottled in the German city of Dessau. Conversely, two production sites in the UK are explicitly mentioned in the contract it signed with the EU." Liese added that AstraZeneca should make up its mind whether it wants to act like an international company or a British one.

As a result of the delivery problems with AstraZeneca and BioNTech/Pfizer, the European Commission is working on a so-called transparency mechanism to take stock of vaccine exports to countries outside the EU.

According to the BBC, a majority of the AstraZeneca doses are being produced in the UK, whereas the BioNTech/Pfizer vaccine is delivered from the EU. 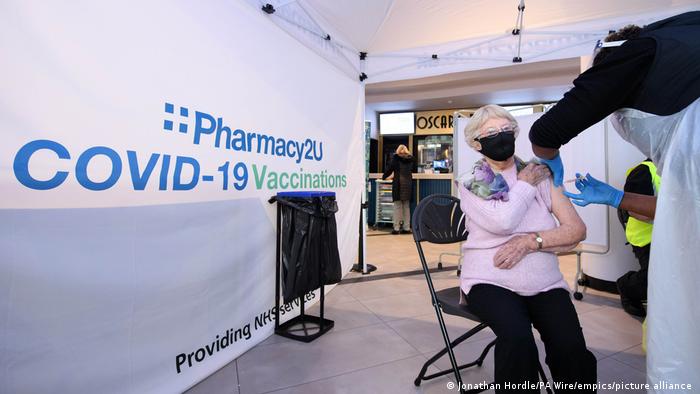 While the EU is forced to wait, people in the UK have been receiving the jab since early January.

Asked by DW to comment on why deliveries are running smoothly in the UK and not in the EU, the company wrote in an email that "Accelerating vaccine production and delivery involves working with more than 20 delivery partners in over 15 countries supported by more than 20 analytical test centers."

Is AstraZeneca in breach of its contract with the EU?

DW fact check: Probably true. Should AstraZeneca, per its announcement, be able to deliver only 40% of the agreed amount by the end of the first quarter, it could be in "breach of contract", according to MEP Tiemo Wölken of the Social Democrats. However, he pointed out that he does not have a copy of the contract to hand. The EU is keeping this contract and most others under wraps. Only the agreement with CureVac has been made partially public.

In an interview with the German daily Die Welt, AstraZeneca's CEO, Pascal Soriot, rejected accusations that his company had acted in bad faith. "We didn't commit with the EU," he said on the delivery amounts. "We said we are going to make our best effort." He also pointed out that the UK had signed a contract three months before the EU did.

The European Commission insists it wants to find a mutually beneficial solution to the problem. Should those efforts fail, the Commission could take legal action against AstraZeneca contingent about what is actually in the contract.

Is the AstraZeneca vaccine less effective in elderly people?

DW fact check: Inconclusive. The elderly belong to the high-risk group. Any diminished efficacy could have fatal results. According to reports in the Handelsblatt daily and the tabloid Bild, the vaccine's efficacy in the 65 and over age group is just 8%.

However, the facts are unclear. The German Health Ministry has contradicted those claims and suggested the source for that figure had mixed up their numbers. "At first glance, it appears that two things have been confused in the reports: About 8% of the subjects in the AstraZeneca efficacy study were between 56 and 69 years of age, and only 3 to 4% were over 70 years of age," a spokesperson said.

An article in the medical journal The Lancet outlined that the number of older adults who had taken part in the 3rd phase of the AstraZeneca vaccine trial was too low to allow a definitive verdict on the efficacy in elderly people at this point. Nevertheless, the UK's Medicines and Healthcare products Regulatory Agency granted AstraZeneca's vaccine emergency approval at the end of last year for adults 18 and older.

AstraZeneca has described the claims of low efficacy in elderly people as "utterly wrong." A company spokeswoman referred to data published in The Lancet in November that the immune response was the same across all age groups. The proportion of older adults in that study was higher; however, the total number of participants was significantly lower. Furthermore, the results pertained to a phase II trial, a predecessor of the study in question, which means experts can't provide a definitive verdict on the efficacy in elderly people.

The European Medicines Agency (EMA) is responsible for the approval of a vaccine in the EU. Depending on its assessment of the AstraZeneca vaccine, EU countries could decide to change their order of priority in administering the vaccine for certain age groups.

The bloc's heath commissioner has said AstraZeneca's delay in delivering COVID-19 vaccines is "not acceptable." The EU paid €336 million for guaranteed orders and is angry the company is delivering elsewhere.

The EMA is evaluating the shot for adolescents. Elsewhere, Hong Kong is limiting public gatherings and Chinese scientists say they have developed an accurate test that gives results in four minutes. DW has the latest.

The European Medicines Agency, the EU's regulator for medicinal products, has approved the BioNTech-Pfizer vaccine for children aged 5-11.