Washington and Brussels have imposed sanctions against Russian officials and businesses. US intelligence officials concluded that the Russian government was behind the attack on Kremlin critic Alexei Navalny. 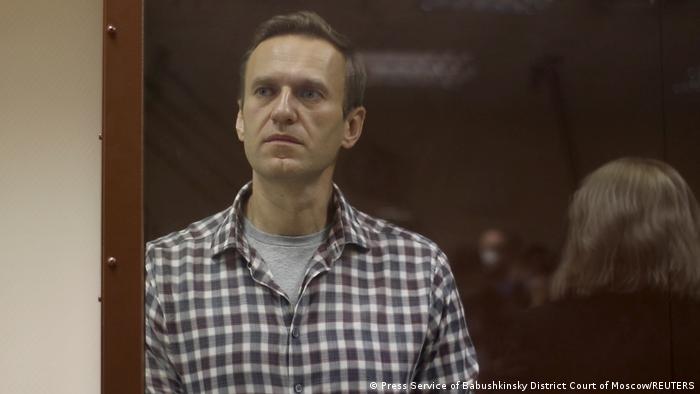 The US on Tuesday slapped sanctions on Russian individuals and entities over the near-fatal poisoning of prominent opposition figure Alexei Navalny with a nerve agent, Biden administration officials said.

Speaking to reporters on a conference call, the senior White House officials said the sanctions were being imposed in coordination with the European Union, and urged the release of Navalny from prison.

Who was targeted in the sanctions?

What did EU and US officials say?

In issuing the sanctions, the US said its intelligence community concluded that Russia's FSB was behind the attack on Navalny.

Tuesday's sanctions mark the first of several steps by the Biden administration to "respond to a number of destabilizing actions,'' said one of the White House officials.

The sanctions are the first against Russia by the Biden administration.

The sanctions issued by the EU primarily concerned Navalny's arrest upon his return to Russia.

Brussels said Bastrykin, Krasnov, Zolotov and Kalashnikov were listed "over their roles in the arbitrary arrest, prosecution and sentencing of Alexei Navalny, as well as the repression of peaceful protests in connection with his unlawful treatment.''

Earlier on Tuesday, the Kremlin condemned moves to impose sanctions.

"Those who continue to depend on these measures should probably give it some thought: are they achieving some goal by continuing such a policy?" Kremlin spokesman Dmitry Peskov said.

"The answer will be obvious: such a policy does not achieve its goals," he added.

Vladimir Chizov, Russia's envoy to the EU, said Moscow would respond to the latest round of EU sanctions imposed, the state-owned RIA news agency reported.

The UK welcomed the sanctions imposed by the US and the EU.

"We will continue to work closely with international partners to hold Russia to account for failing to uphold their Chemical Weapons and Human rights obligations," Foreign Minister Dominic Raab said on Twitter.

What about 'Putin's billionaire cronies' ?

In an interview with DW, Bill Browder, an expert on corruption in Russia and head of the Global Magnitsky Justice Campaign, says the sanctions are "a good first step" but that "a lot more still needs to be done."

"I'm very glad to see that Biden has veered away from the policies of Trump and gotten tough on Russia," Browder told DW.

"But I should point out that this is a very short list and it's a list that doesn't include Putin's billionaire cronies. And those were the people who would affect Putin's actions going forward," he said, adding that those are also the people who Navalny had called to be sanctioned before he was arrested.

According to Browder, the "only way to touch Putin is by going after the oligarchs."

Browder said one reason why Biden has not taken such measures is because he was seeking a multilateral strategy by combining forces with the EU. He warned, however, that "the EU gets watered down by its own dysfunction of having to have unanimity."

What happened to Navalny?

Navalny fell ill on August 20 during a domestic flight in Russia. Two days later, he was flown to Berlin for treatment while still in a coma.

The US and several other countries have linked the attack to Russian President Vladimir Putin’s security services. Navalny is Putin’s most prominent opponent.

After spending months recovering in Germany, Navalny was arrested on January 17 upon returning to Russia for an alleged parole violation.

His detention prompted street protests across Russia, where police arrested thousands of demonstrators.

Navalny has been transferred to a Russian penal colony to begin serving a sentence.

The EU, which already had imposed sanctions against a small number of Russian officials, is expected to announce more sanctions.

The US has also said it plans to respond soon to the Russian hack of federal government agencies and US corporations which exposed potentially sensitive information to the Kremlin.

The Biden administration has vowed to confront Putin for the alleged hacking abroad, as well as for alleged attacks on Russian opposition figures.