Could Germany′s constitutional right to asylum be pruned? | Germany| News and in-depth reporting from Berlin and beyond | DW | 22.11.2018

Could Germany's constitutional right to asylum be pruned?

One contender to take over as successor to Angela Merkel has questioned whether Germany's constitutional right to asylum should stay in its current form. It's not the first time the law has been a political hot potato. 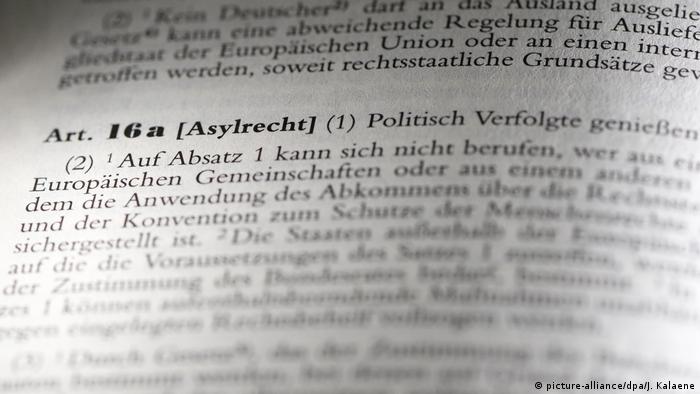 The right to asylum is guaranteed under Article 16a of Germany's constitution — the Basic Law — and was drafted for unique historic reasons.

The constitutional guarantee — written into German law partly as a result of Nazi crimes against Germans and non-Germans before and during World War II — applies to all "politically persecuted" individuals.

Friedrich Merz, who is one of the candidates vying to succeed Chancellor Angela Merkel, has claimed that — because Germany is the only country in Europe to have a constitutional right to asylum that allows each individual to defend that right in court — the country could be forced to take in any refugees rejected under a common European asylum policy.

For this reason, Merz has questioned whether the constitutional guarantee should remain in its current form as Europe seeks such a common asylum policy.

Articles in the German Basic Law cannot be removed or repealed by the normal amendment process.

However, the constitution — initially drafted to allow people from Communist-dominated Eastern Europe to seek protection from political persecution — has been altered in the past. Article 16a was modified in 1993.

From the 1970s onwards, there was a rise in the number of people from Africa and Asia seeking asylum. The fall of Communism led to increased migration from Eastern Europe, leading to more votes for far-right parties in Germany.

Noting pressure to curb immigration, politicians sought to place limits on the unbounded right to asylum for the politically persecuted. By adding some stipulations to the constitution in 1993, refugees were prevented from claiming asylum if they had come from another "member state of the European Communities."

The right to asylum was also limited for people entering Germany from countries that were deemed to be safe by Germany's upper house of parliament, the Bundesrat.

Applicants who came from a "safe country of origin" were still entitled to apply, but only if they provided evidence of political persecution. The states included Bulgaria, the Czech Republic, The Gambia, Ghana, Hungary, Poland, Romania, Senegal and Slovakia.

In the wake of the 2015 refugee crisis, further adjustments were made to the rules without any change to the constitution. These included a widening of the safe countries of origin list.

In addition, efforts were made to speed up and ease the asylum and deportation processes.

EU law is also more comprehensive as it goes beyond political persecution as grounds for seeking asylum.

In addition, Merz has called for clarification that a new UN migration pact, along with the constitution, won't create new grounds for asylum "through the back door."

Merkel, who has been chancellor since 2005 but who is set to step down at the next election, has defended the pact, saying it is the best way to "solve global problems internationally."

Paying the price for helping refugees in Germany

Thousands of people in Germany have vouched for refugees in recent years and are now being asked to pay high sums. Were their good intentions misguided? (18.11.2018)

Opposition lawmakers have lodged hefty criticism against Merkel's could-be successor for questioning the individual right to asylum. The populist AfD said Merz has become more right-wing than they are. (22.11.2018)