The single-dose jab is less effective than its two part counterpart, but is still in line with the WHO's standards, Russian officials said. The EU is set to welcome Israeli tourists this summer. DW has the latest. 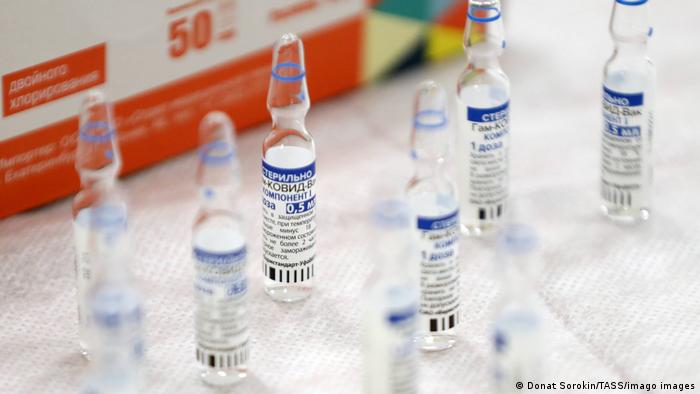 The Russian Direct Investment Fund (RDIF), which helped finance the vaccine, said the single-dose version "demonstrated 79.4% efficacy" compared to 91.6 % for the two-dose version.

The two-dose version has been approved for use in over 60 countries, but it has yet to be approved by the European Medicines Agency (EMA) or the US Food and Drug Administration (FDA).

The Sputnik V has been approved on nearly ever continent, but not every country

The European Union added Israel to its list of countries whose citizens will be allowed to visit as tourists. The move comes as the EU slowly eases its blanket non-essential travel ban from foreign countries, except for New Zealand and Australia.

Israel has had one of the fastest immunization programs in the world. More than 70% of Israel's population have been fully vaccinated against coronavirus.

Germany is opening up the AstraZeneca vaccine to all adults, Health Minister Jens Spahn announced. The vaccine was restricted to adults over 60, following concerns about extremely rare, but serious, blood clots.

A Fijian hospital has gone under lockdown by the military and police after a patient died of COVID. The patient was just the third to die from the illness in the country.

Health authorities said that they were quarantining 400 patients, doctors, nurses and staff within the building until they can determine who was in close contact with the deceased patient. The nation's leaders are concerned that the latest outbreak is spreading across the country, with 28 ongoing cases of community transmission.

A case of the COVID-19 variant B.1.617, first identified in India, was found in Kenya, a few days after it was detected in neighboring Uganda.

"This variant has been picked (up) in Kenya and because of global connectivity, it is just a question of time. You cannot be able to put barriers…to prevent a virus from accessing your territory," said the ministry's director general, Dr. Patrick Amoth. Kenya and Uganda have both suspended all flights to India.

Maldives will implement a night-time curfew beginning Thursday in an attempt to halt a growing COVID outbreak. The Health Protection Agency announced the curfew after government data showed daily cases more than doubled to 734 from 318 one week ago. Most of the cases were reported in the capital Male. Recent local elections and family gatherings during the ongoing Muslim fasting month of Ramadan.

Pfizer and BioNTech announced a deal with the International Olympic Committee (IOC) to provide vaccines to athletes and staff for the upcoming Summer Olympics in Tokyo. The companies and the IOC said the initial doses would be delivered starting at the end of May.

"We are inviting the athletes and participating delegations of the upcoming Olympic and Paralympic Games to lead by example and accept the vaccine where and when possible," said IOC President Thomas Bach.

There are expected to be more than 11,000 athletes at the sporting event. The IOC has been promising for months that the Olympics would be safe, even though several Japanese region are once again under a state of alert due to increases of new COVID-19 cases. The Olympics and Paralympics were delayed by one year due to the pandemic.

Novavax said it has signed an agreement with the GAVI vaccine alliance to produce and distribute 350 million doses of its COVID-19 vaccine to the COVAX program.

Novavax's vaccine candidate has yet to be authorized in any country, but the company and India's Serum Institute will plan to begin the delivery of doses in the third quarter of this year.

Drugmakers said Biden's support for waving patents of COVID-19 vaccines could disrupt the supply chain and it would be better for richer countries to share their vaccines with the rest of the world.

The International Federation of Pharmaceutical Manufacturers and Associations (IFPMA) said if the patent waiving is adopted by the World Trade Organization (WTO) the proposal would allow new manufacturers that lack essential know-how and oversight from the inventors to crowd out established contractors.

IFPMA Director General Thomas Cueni told Reuters there would be a potential free for all if "sort of rogue companies" were involved.

"The protection of intellectual property is a source of innovation and must remain so in the future," said a German government spokeswoman in a statement.