The German government said while they support global vaccine supplies, "the protection of intellectual property is a source of innovation and must remain so in the future." 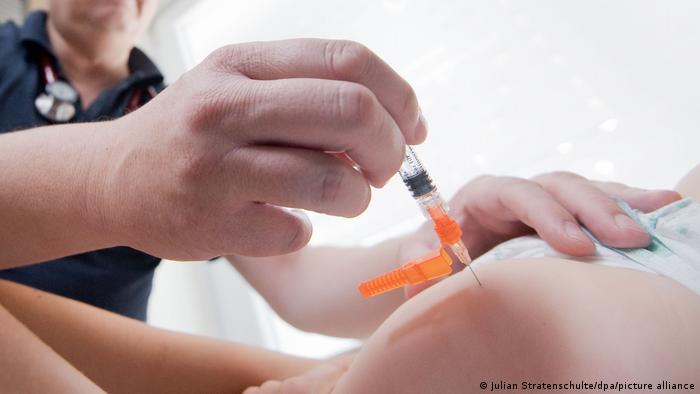 A government spokesperson said production and quality standards were the main issues in vaccines, not patents

The German federal government pushed back against US calls for patent waivers on coronavirus vaccines, a government spokeswoman said on Thursday.

"The US suggestion for the lifting of patent protection for COVID-19 vaccines has significant implications for vaccine production as a whole," the spokeswoman said in a statement, emphasizing: "The protection of intellectual property is a source of innovation and must remain so in the future."

The government, instead, said production capacity and quality control were the key impediments to widening access to vaccines — not intellectual property rights.

The statement underscored that Berlin supports the COVAX initiative (COVID-19 Vaccines Global Access) aimed at giving vaccine access to as many people in the world as possible. It also noted that discussions at the World Trade Organization (WTO) were ongoing.

Where do other countries stand?

Berlin's statement came in response to a shift in US policy in which President Joe Biden called for a temporary patent waiver on COVID-19 vaccines Wednesday as a way to facilitate vaccine access.

While Albert Bourla, CEO of vaccine maker Pfizer said his company was "not at all" in favor of the waivers, European Commission President Ursula von der Leyen said she would be open to discussion on the topic.

The issue of coronavirus-related patents has occupied the WTO since October, when South Africa and India lobbied it for patent waivers on vaccines, therapeutic drugs and related medical equipment in hopes of increasing production and access to vaccine protection for all people.

In April, the WTO said that only 0.2% of the 700 million vaccine doses administered worldwide had been given in low-income nations. The deadly consequences of that imbalance are currently on full display in India, the world's second most populous country.

The struggle over vaccine patent rights at the WTO is not new, what is, however, is the major shift in US policy, which observers say may make the difference this time around.

Nevertheless, neither quick action nor victory can be taken for granted in a body that requires all 164 member countries to be in consent before such measures can pass. Moreover, much will depend upon how much either side is willing to compromise.

Biden's policy turnaround will put pressure on countries that had staunchly defended patent protection but not wanting to look as if they are blocking access.

Two further factors could also be key, namely the rather narrow proposal put forth by the Biden administration — which covers vaccines only — and the fact that India and South Africa have also said they would be submitting a revised proposal of their original request.

Thus, observers say the proposal has the chance to move forward quickly if there is willingness to compromise, but much less so if not.

In her Wednesday statement, US Trade Representative Tai said, "This is a global health crisis, and the extraordinary circumstances of the COVID-19 pandemic call for extraordinary measures."

WTO Director-General Ngozi Okonjo-Iweala seemed to echo that sentiment, saying, "We need to respond urgently to COVID-19 because the world is watching, and people are dying."

Okonjo-Iweala furthermore praised the spirit of dialog members were showing in the matter, saying: "I am pleased that the proponents are preparing a revision to their proposal [ … ] It is only by sitting down together that we will find a pragmatic way forward, acceptable to all members, which enhances developing countries' access to vaccines, while protecting and sustaining the research and innovation so vital to the production of these life-saving vaccines."

The US has backed India and South Africa's bid to temporarily lift patent protection for COVID-19 vaccines. The support for an IP waiver by the WTO has left pharma companies dismayed and health activists asking for more.