Angela Merkel to designate Georgia as safe for migrant returns

Merkel announced that Georgia would be labeled a safe country of origin, making it easier for Germany to send back rejected asylum-seekers. The comments came at the start of her visit to three ex-Soviet Union republics. 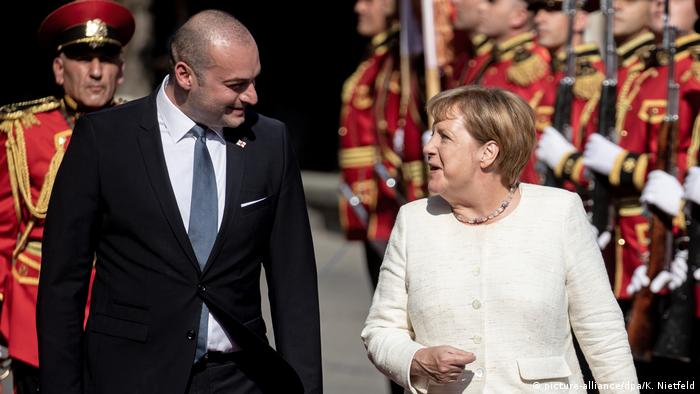 Following a rise in migrant arrivals from Georgia, Chancellor Angela Merkel said on Thursday that Germany would soon designate Georgia as a safe country of origin.

The comments came after meeting with Georgian Prime Minister Mamuka Bakhtadze in the capital Tbilisi where Merkel kicked off her three-day trip to the South Caucasus region.

Merkel noted that since the European Union liberalized visas for Georgians, Germany has seen a rise in the number of asylum applicants from the country.

The decision to label Georgia as a safe country of origin would make it harder for Georgian asylum-seekers to be recognized as refugees in Germany. It also makes it easier for Berlin to return rejected asylum-applicants.

Between January and July this year, some 2,625 people from Georgia applied for asylum in Germany, comprising 2.7 percent of all applications so far this year, according to figures from the Federal Office for Migration and Refugees (BAMF).

Merkel also criticized the continued presence of Russian soldiers in Moscow-backed separatist regions that split from Georgia a decade ago.

"During my last visit to Georgia 10 years ago, I demanded the withdrawal of Russian troops," Merkel said at a joint press conference with Bakhtadze. Today, "of course, I am standing by Georgia's territorial integrity," she added.

Merkel noted, however, that despite repeated efforts address the issue of Russia's military presence, there hasn't been notable progress.

Merkel's visit comes at a time when territorial conflicts and Russian influence in the region continue to simmer, just 10 years after the South Ossetia and Abkhazia regions broke away following a brief armed conflict between Russia and Georgia.

Georgia's government, which has close ties to the EU, said it remains committed to carrying out reforms that would put it on track for EU and NATO membership, albeit some time from now.

"We are part of European civilization ... but we have no illusions, we still have a lot to do," Bakhtadze said. "If the will is there, Georgia will be ready to be a member of the EU and NATO."

During Merkel's visit, Germany and Georgia signed development cooperation deals worth over €193 million ($223 million), including projects to improve drinking water and sewage systems and to build a gas storage facility.

During her trip to the South Caucasus region, Merkel is also due to visit two other former Soviet Union states. On Friday, she will travel to Armenia followed by a trip to Azerbaijan on Saturday.