Ten years after the war between Russia and Georgia, villagers near the breakaway region of South Ossetia still live under the strain of the conflict, dealing with border issues and Russian patrols. Emily Sherwin reports.

As Ilya Bervashvili walks out onto to his corn fields, the blue circle on the map moves beyond the dotted line with him. But an app clearly shouldn't be trusted when it comes to this border. Things are more complicated here than they appear on Google Maps.

The farmer points to the green sign just beyond his land. It says it marks a "state border" between Georgian-controlled territory and the breakaway region of South Ossetia, which is only recognized as a state by five countries worldwide — including Russia, which backs and defends it. Georgia sees this as an "occupation line." In many places, the boundary isn't marked at all — and it has been known to move. Here in the Georgian village of Ditsi, there is a small section of green border fencing. On either side of the fence, there is nothing. 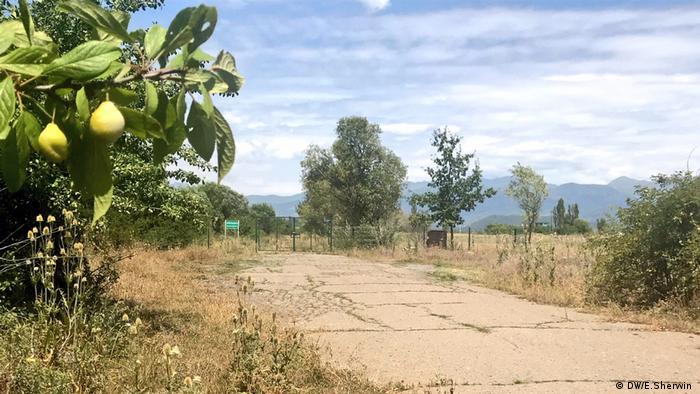 In the village of Ditsi, a small section of fencing and a sign marks the crossing to South Ossetia

"They are behind my land," says Ilya, referring to the Russian border guards he says patrol along his fields, just beyond the sign. "I work all the way up until the edge of my land. They don't bother me and I don't bother them. But they are behind my land, patrolling." He adjusts his canvas hat. "If they say 'hello' and speak to me I answer them."

Ilya used to work for the Georgian police — but he has been a farmer for 15 years now. Along with corn, he grows pears, nuts, grapes and raspberries here. Chickens roam around the courtyard of his stone house. This land has been in the family for generations. The moving boundary line to South Ossetia has already swallowed some of his property, but it is the psychological strain of war that he finds harder to let go.

In early August 2008, tensions between Russia and Georgia escalated into a full-blown war over the Georgian breakaway regions of Abkhazia and South Ossetia. When Georgia moved to take back control of Tskhinvali, the capital of South Ossetia, Russia responded with tanks and airstrikes, asserting that it was defending Russian citizens in the region.

Read more: Looking to the future in Abkhazia 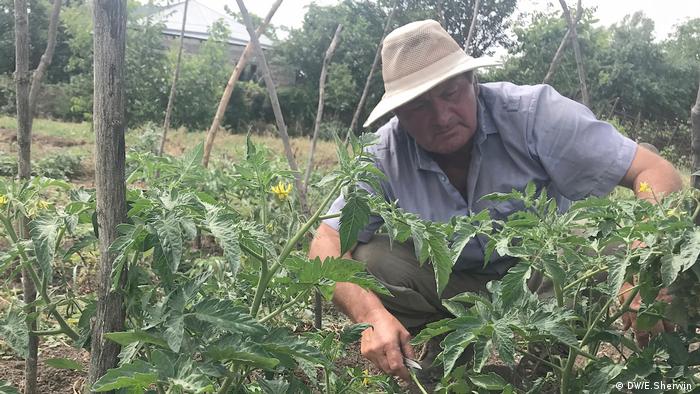 Bombs in the orchard

"I was home. I watched from here. It wasn't easy to watch because they were bombing everything around us," Ilya explains. He says six mortars fell on one of his fields. "And you can still see where the shrapnel from one hit that post over there." He points to an electricity pole that is missing large chunks.

Ilya's mother, Venera Edisherashvili is stooped over sweeping the front porch of the house. She sits on a wooden stool to rest. The 84-year old says one of her three sons was killed during the war. "At night I sometimes can't sleep because I'm afraid for my son. Afraid that they will come. I'm afraid."

For Ilya, it's the potential danger of the boundary line to South Ossetia that haunts him. "The strain can be felt all the time. If you cross the line they can seize you, fine you, put you in prison. If our animals cross, they take them. They walk around here and indicate what belongs where, they walk around with dogs, with weapons — of course that puts you in a certain psychological state." 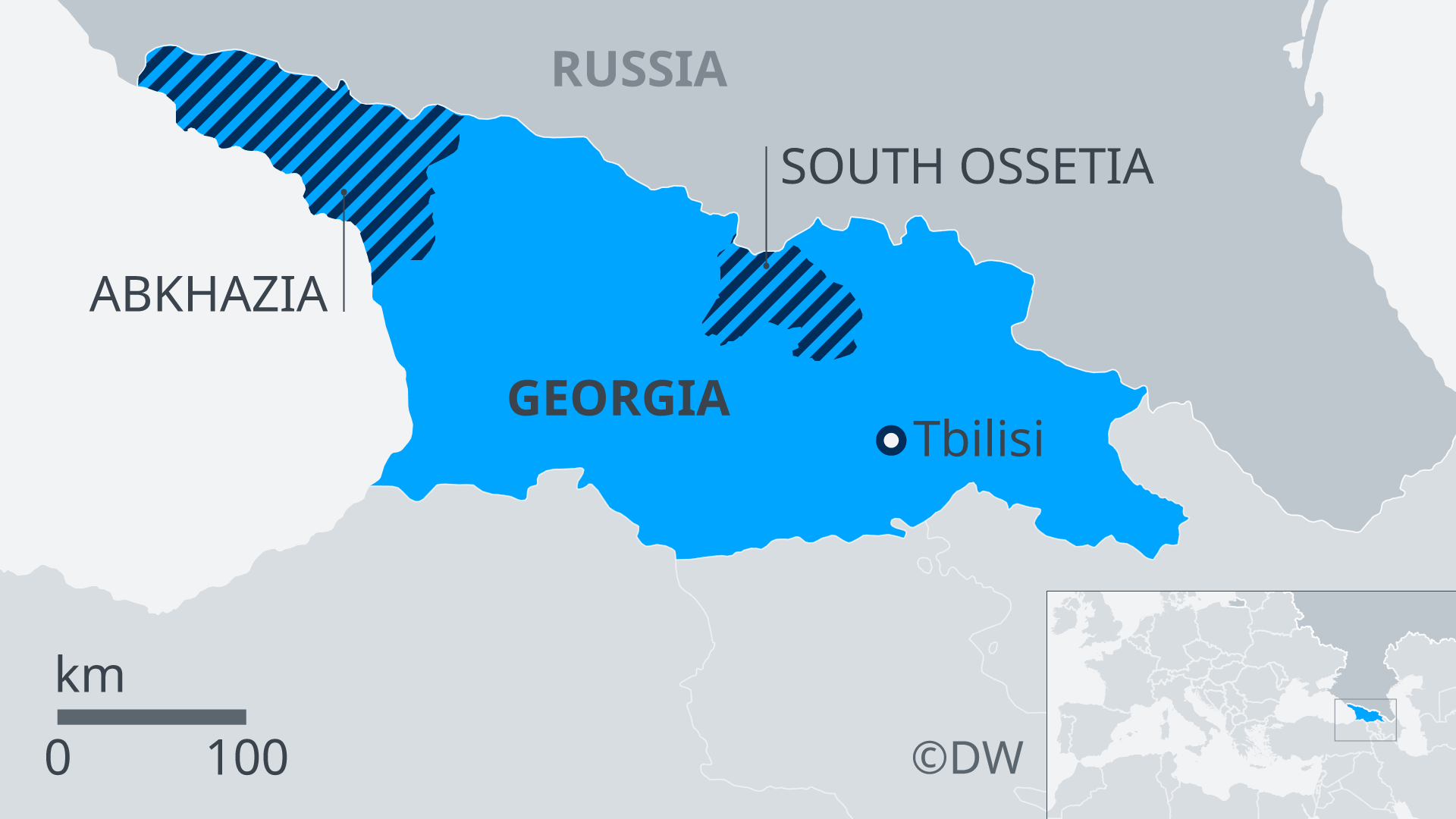 Observers, on the other hand, see the conflict's fault lines as fairly stable. Erik Hoeg, the head of the EU Monitoring Mission in Georgia describes the de facto border as "hardening" in many places, with more fencing going up, a process which has in some cases cut off people's land, separated families and restricted freedom of movement.

Hoeg explains that things are "relatively stable in the sense that we do not have shooting at the Administrative Boundary Line (ABL)," the term the EU uses to describe the line between the territory controlled by Georgia and the breakaway regions.

"[But] the fact itself that you have a big number of armed personnel relatively close to each other along the ABL is something that you have to monitor closely, especially where there is no common agreement on where the ABL is running — areas with a lot of uncertainty. That's why we are on the ground with 200 monitors 24/7."

The EU mission has been patrolling here since 2008 and also runs a hotline for people on both sides of the conflict to call in incidents. For example, there were over 150 detentions along the line last year, according to EU monitors.

Lado Bitshashvili from the Gori branch of the NGO Human Rights Center agrees that all sides of the conflict must continue to tread carefully, even 10 years on. "Even one incident can provide the impulse to turn this frozen conflict into a flashpoint again. It is very important for all the sides to make sure that the incidents that do take place don't escalate into something broader."

The flow of time 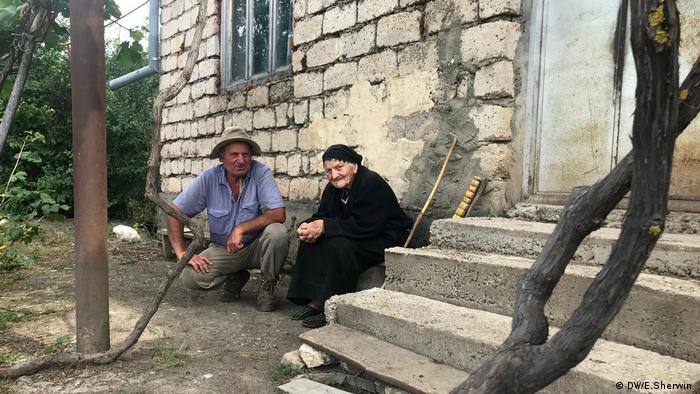 In Ditsi, Ilya and his mother Venera are certainly willing to stand their ground — literally. "Me and my son are unpaid border guards," Venera laughs. She tells DW she keeps the EU's number at the ready in case there is movement on the line.

Ilya is just as determined. "This is my piece of Georgia, this is my section of my home country," he says. "I will not give even one step, one drop away to anyone.  As long I am alive, the boots of Russian soldiers won't touch the ground here."

Though many of the uncertainties the war brought remain, there is a quiet sense that things are moving forwards in Ditsi. The conflict had cut off the town's water supply, which came from South Ossetia. But three years ago the authorities redirected water to the town from a nearby river. And just a month ago, new metal pipes were laid that now take the water directly to people's farms.

A small stream of water flows through Ilya's field, as well. "Soon the raspberries will be ripe," he says.