Looking to the future in Abkhazia | Europe| News and current affairs from around the continent | DW | 17.03.2014

Tiny Abkhazia lies within sight of the bright lights of Sochi and Russia. But hopes that the Games would bring money to this self-proclaimed republic were dashed as the border shut down. So whither Abkhazia now? 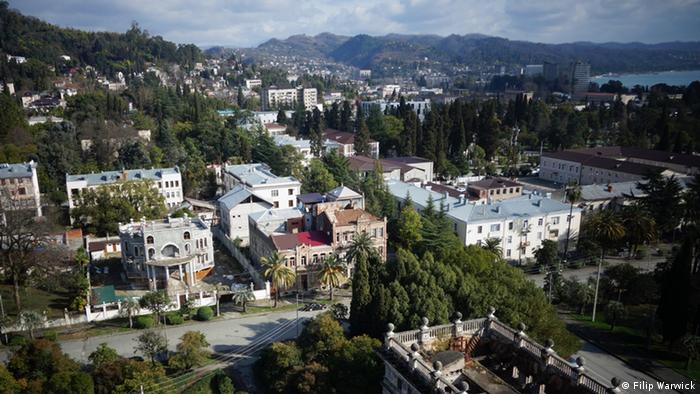 Today, Abkhazia remains in limbo. Mostly unrecognised as an independent state, its ceasefire with Georgia has largely held for the past 20 years though scars of the conflicts remain, even as residents try to put the past behind them as they rebuild.

The games were meant to showcase Russia's technological and cultural advancement since the collapse of the Soviet Union, but just across the border in Abkhazia there's a very different story to be found. The country, now a self-proclaimed republic was once heralded as the subtropical jewel of the Soviet Union.

Abkhazia lies on the eastern shores of the Black Sea. Its status as a verdant paradise is looking a little dusty today more than 20 years after its war and secession from Georgia.

Many buildings in the capital Sukhumi are shells of their former selves. A testament to a bloody conflict that from 1992-93 left around 20,000 dead and permanently displaced more than 200,000 ethnic Georgians.

Only with the help of a hammer to break away frozen padlocks is it possible to enter the city’s former Soviet administration building. The 12-storey building offers a panoramic view of Sukhumi’s palm-dotted boulevards that lead to the harbor on the Black Sea.

Since 27 September 1993 this building has been a burnt-out shell. It was on this day that the Abkhaz separatist army gave Georgian forces an ultimatum to surrender. When they refused, the building was stormed. 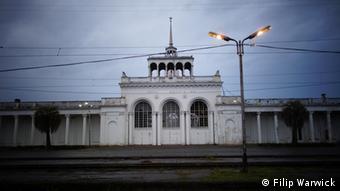 Cancelled for the Games' duration: train services between Moscow and Sukhumi.

Abkhaz consider this a day of liberation, though for Georgians it remains a traumatic symbol of defeat that spelled the end of the war and the beginning of a stalemate that persists more than 20 years later.

Abkhazia remains very sensitive here in the Caucasus. Georgia continues to claim it as its territory - a stance backed by most international bodies including the European Union.

Today Russian forces guard the border and station troops on the territory they recognize.

But there's more to this country than burned buildings and open wounds.

The population of 200,000 people here are trying to make a fresh start and Abkhazia has managed to rebuild much of its tourism infrastructure including hotels, cafes and restaurants.

But if there was any hope that the nearby Sochi games would be a boon for Abkhazian tourism it didn't last long. Moscow has given security pre-eminence over other concerns. It imposed an 11-kilometre security buffer inside Abkhazia that’s jointly patrolled. It’s also stopped any private and commercial vehicles from crossing except by special permit, effectively shutting down almost all legal trade.

Initial attempts at interviewing people at the border were frustrated by a polite yet firm Abkhaz official who said journalists weren't allowed to work inside the buffer zone. But around the corner in a nameless cafe locals were eager to give their opinions. 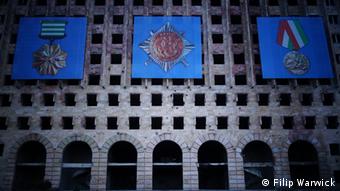 The country is not just a series of burnt out shells

People work on the border and carry goods across - that's their job, their livelihood. "During the Olympics, they told us they couldn't go there, couldn't move that - and so people just sit around,” said Gunda, the friendly cafe owner.

Added restrictions made the nearby Olympics an extra burden on local people who make a living carrying goods back and forth on foot to supplement their Russian pensions that equal about 100 euros a month.

“Look at these women, they live on the border. They left their families very far from here - they're living in someone else's house - and they're working on the border. They're the breadwinners. They've arrived and there's no work,” she told DW.

The women nod in agreement; But are then quick to affirm their allegiance to the Russian Federation. It's Russia, they say, that pays them a pension that helps them survive.Which is why they rooted for Russian athletes at Sochi.

Abkhazians can't root for Abkhazia because this state isn't recognized internationally. Athletes here compete under the Russian flag when they go abroad.

"My wish is that the international community would recognize Abkhazia so it could participate in the summer Olympics," says Abkhazia’s national wrestling coach Dzharnaz Benia. "For many coaches and athletes this is their dream.” 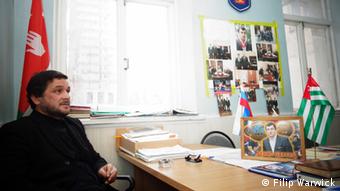 Conflict with Georgia is 'political not personal'

Benia is keen to show off an impressive-looking gym being built in his hometown of Gudauta, one of nearly a dozen being constructed to develop sport among youngsters.

Wrestling is big here - and Benia's coached some world-class athletes - but always under the Russian flag since his state remains unrecognized.

Benia is quick to point out that the conflict with Georgia is political, not personal. The two peoples grew up side-by-side and even today says he counts many ethnic Georgians as personal friends.

"Sport is without borders, sport brings people together, we don't want any conflicts with anybody. We have good relations with Georgian athletes and I have many athlete friends in Georgia," Benia says.

The country's international isolation makes things difficult, though. Investment comes from businesses in Russia and to a smaller extent, Turkey. Even so, official figures show that 40 per cent of the state budget comes from the Russian Federation though the actual number could be even higher.

Abkhazia's 34-year-old Economic Minister David Akapovic says his country remains committed to its independence. For example, local laws don't allow foreigners - including Russians - to buy property which may hinder development but keeps them from being swallowed up by foreign investors.

He insists that support from Moscow is meant to be a temporary arrangement.

"With this help, with this financial help from the Russian Federation, we can recover and we can earn enough money to make our economy independent," he says.

Few here are willing to criticize Russia directly and the minister is no exception. He says Russia’s security arrangements imposed during the Winter Games weren't too much of a burden. 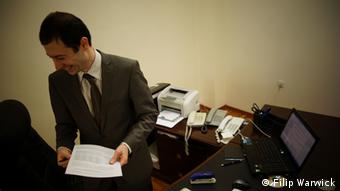 "Considering that we had permission for our trucks for loads for the food and other necessary products, it was enough for our needs for that period.”

Despite his optimism Georgia makes sure that the country remains isolated as Georgia’s deputy foreign minister David Jalagania affirms.

"No recognition can happen because the country cannot recognize as independent any piece of its territory," Jalagania says from his office in Tbilisi, "[that will just] never happen."

So the stalemate continues. Abkhaz separatists ask for international recognition while Georgia’s government wants displaced people to return home and Russian troops to exit the territory. Both sides talk past each other and it's ordinary people who are caught in the middle trying to eke out a life into the future.

Crimea has drawn frequent comparison with South Ossetia and Abkhazia. Even though the parallels between the two are far from simple, decision-makers could still learn from looking at Russia's behavior in Georgia. (08.03.2014)

The Winter Olympics are a source of jobs for many people in the Sochi area, and a source of excitement for many others. For the village of Akhshtyr, the games have proven nothing but a source of problems thus far. (06.02.2014)