The Winter Olympics are a source of jobs for many people in the Sochi area, and a source of excitement for many others. For the village of Akhshtyr, the games have proven nothing but a source of problems thus far. 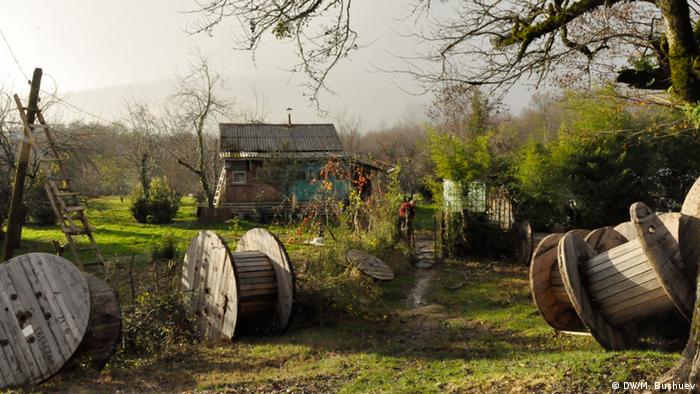 //www.sochi2014.com/en/news-the-ecosystem-of-mzymta-river-basin-will-be-restored-conjointly "Akhshtyr? Where is Akhshtyr?" - taxi drivers in Sochi type the name into their navigation systems, but they come up empty-handed. The village with its population of 70 inhabitants is perched on a mountainside in the Adler district on the border with Abkhazia.

Many local companies and residents have profited from the upcoming Winter Olympics in nearby Sochi: Bulk orders boost local sales, but above all, there are new jobs. People in the region are also excited about the big, new winter sports arena and the state-of-the-art infrastructure.

But the villagers in Akhshtyr see little to celebrate. 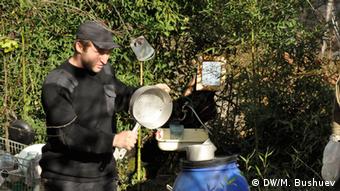 The Olympics haven't brought anything good to the village, Ilya Samesin said. "I used to drink the water from the Msymta River, and catch salmon," the long-time resident told DW. And now? The villager stares at the muddy yellowish water of the river that flows right by the Olympic complex in Krasnaya Polyana. "All you can fish from the river these days is construction waste."

Quality of life takes a dive

Life as the villagers in Akhshtyr knew it changed dramatically when construction of the large Winter Games complexes began in Sochi in 2008. The mountain village was once surrounded by pristine nature reserves, but in the course of the preparations for the Olympics, the entire area lost its status as a national park. Quarries and waste dumps mushroomed, and rubble was transported on a makeshift concrete roadway along Akhshtyr 's main street.

Construction of a railway line and a highway from the coastal areas to Krasnaya Polyana, which is high in the mountains, destroyed the landscape along the banks of the River Mzymta. Numerous old trees were felled. 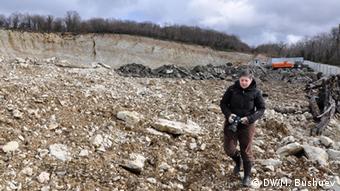 Noskovez frowns on the many illegal waste dumps that have emerged

Waste from construction projects soon became a major headache. The garbage dumps along the road in Akhshtyr soon towered higher than the signs proclaiming that dumping waste in a water reserve is prohibited.

Olga Noskovez pointed out another major problem. Waste and garbage are dumped in the quarries unchecked, and then the pits are simply covered over with soil, the Environmental Watch on North Caucasus member told Deutsche Welle.

No water, no road

However, many locals say the worst result of all is that the village no longer has a source for drinking water. In the past, the villagers used water from a well, but the water vanished due to excavation activity. "The ground here is like a sponge," Ilya Samesin said, adding that now, construction equipment weighing several hundred tons is parked at the site. Today, the village relies on water deliveries. There is enough water for the villagers, Samesin said, but not for livestock, so many villagers had to get rid of their farm animals.

The brand new highway is just half a kilometer from Akhshtyr, but the villagers can't it use it because there is no access route. The pedestrian bridge across the river into the next village - which has a bus line into the city - is decrepit and perilous to use. "Three years ago, the mayor promised live on TV that we would have water and access to the road to Krasnaya Polyana," llya Samesin said. But nothing ever happened.

Promises for the future 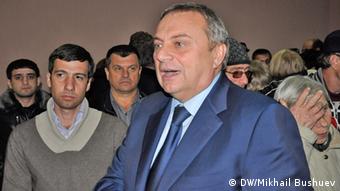 Sochi's mayor has made efforts at appeasing the villagers

Not too long ago, Sochi mayor Anatoliy Pakhomov visited Akhshtyr - and almost all of the piles of waste soon disappeared. Pakhomov promised to shut the biggest quarry soon and to repair the concrete trail for use as a proper road. The mayor also pledged to reinstate the bus line that was cancelled in 1991, and pointed out that a gas pipe now runs to the village. Many villagers complain, however, that they can't afford hooking up the gas line to their private homes.

Sochi's mayor and the villagers came to an agreement that a newly-formed task force will search for a new source of drinking water near the village. For the time being, trucks still supply the village with fresh water on a daily basis.

Akhshtyr locals are skeptical. "Nothing is going to change," pensioner Ella Sanginovna predicted. Mayor Pakhomov has made promises before, and broken them, many villagers say.

The head of Human Rights Watch tells DW that the Olympics may mean an end to the Russian UN veto over Syria. And how a free Ukraine could inspire a similar uprising in Russia - Vladimir Putin's 'nightmare.' (01.02.2014)