With the Winter Olympics only a month away, security measures in the Black Sea resort of Sochi are being tightened while criticism of the security clampdown has waned following bomb attacks in Volgograd. 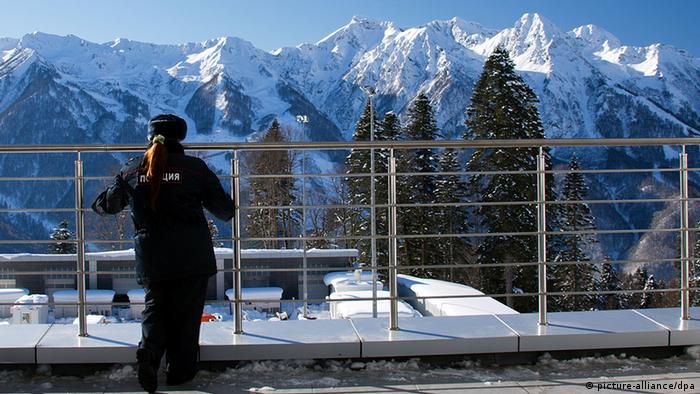 The president's ritual televised year-end speech on New Year's Eve is a Russian tradition. This year, however, the bomb attacks in Volgograd forced President Vladimir Putin to make last-minute changes to the routine address. Due to the enormous difference in time zones in Russia, the people in the easternmost Kamchatka region saw the original pre-recorded version, while the rest of the country saw the amended speech in which Putin declared war on terrorism. 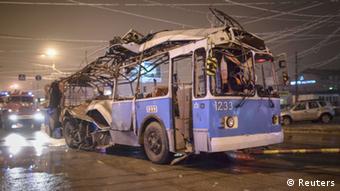 No one has claimed rersponsibility for the blasts in Volgograd

More than anything else, the Russian leadership fears an attack on the Winter Olympics in Sochi that are due to begin on February 7.

Perhaps fears are exaggerated at the moment, says Alexej Filatow, formerly an officer with the Alfa anti-terror unit: "But they appear to be justified. Security should come first, and convenience second."

The Sochi Winter Olympics look set to become the biggest security operation in Russia since the 1980 Summer Games in Moscow. According to official reports, 37,000 police officers from around the country will patrol Sochi. Many are still learning English as well as brushing up on their knowledge of mountain lore to help foreign tourists and to be prepared for operations in the mountains in case of emergency.

An additional 23,000 members of the Ministry for Civil Protection are to be stationed in Sochi, as well as numerous soldiers, border patrol and an unknown number of intelligence agents.

Naval vessels and submarines will patrol the coast while drones and fighter jets guard the Games from the skies. Dozens of extra police cruisers already patrol the Sochi area. Police from other Russian cities have been in Sochi for weeks, testing routes and practicing response tactics. About 1,400 video cameras have been installed throughout the city and quad vehicles stand ready for use in the mountains. 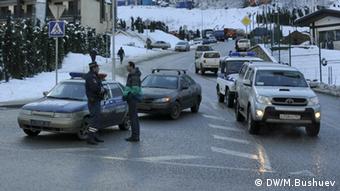 Strict controls are already in place

From Tuesday (07.01.2014), a month before the start of the Winter Games, new security measures have been imposed. Visitors who plan to spend more than three days in Sochi must register with the local authorities. Ticket holders for the sports competitions receive special spectator passes that automatically transmit their personal data to the security forces. No vehicles from other Russian regions are admitted into city, except for especially accredited trucks carrying food and other products.

Prohibited zones have already been set up, to which there is no or very limited access. Among them are the region along the border with the renegade Republic of Abkhazia and the mountains around the village of Krasnaya Polyana, the venue for all alpine sports at the Sochi Games. The heightened security zones are designed to block terrorists from the North Caucasus.

Authorities are busy trying to rid the city of all migrant workers and people without proper documents. Patrols search the streets for illegal aliens and abandoned cars. Sochi residents are urged to keep an eye out for suspicious individuals or objects.

All mail to be opened

Russiahas more or less canceled the privacy of correspondence during the Winter Olympics. The national postal operator has announced that all packages and mail en route to the Krasnodar region, which includes Sochi, will be opened beginning January 1 through the end of March.

Electronic mail will also be controlled: Russia's FSB security force plans to monitor all telecommunication during the Games. SORM, the Russian equivalent of the US Prism communications surveillance system, has been modernized specifically for this purpose.

The cost of safety 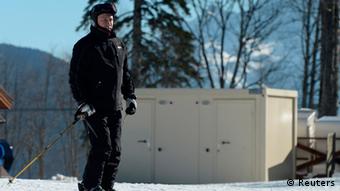 Critics of the security measures in Sochi have fallen silent after the recent terror attacks in Volgograd. The enormous financial cost is no longer questioned. In early 2013, Russia's Vedomosti business daily estimated security costs at $2 billion (1.47 billion euros); since then, estimates have skyrocketed to three billion dollars.

According to Yekaterina Sokiryanskaya, a human rights activist with the International Crisis Group, the threat of attacks in Sochi or other Russian cities still remains: "The enormous efforts made in Sochi and elsewhere in Russia are no guarantee that nothing will happen during the Games."

Chechen rebel leader and Russia's most wanted terrorist, Doku Umarov, has ordered his followers to sabotage the upcoming Winter Olympics in Sochi with whatever it takes, including attacks on civilian targets. (05.01.2014)

Russians have deep-rooted anxieties when it comes to Wahabis. The country’s media claim that there are hundreds of thousand of radical Islamists in Russia. But are they all Wahabis? (02.01.2014)