Faced with the Russian military presence on Crimea, NATO has intensified its tone. Experts believe the alliance could at least offer a forum for discussion in the conflict. 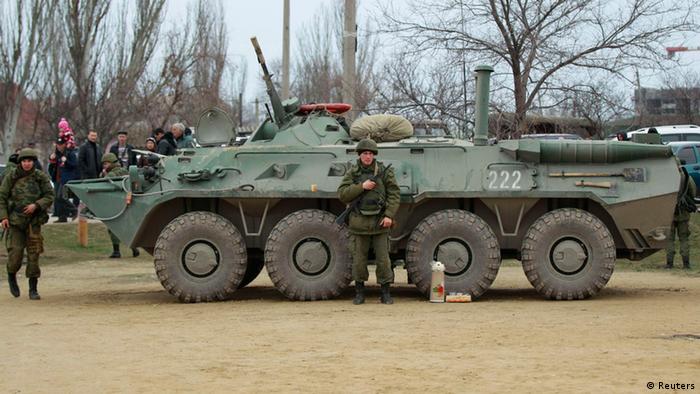 The situation in Crimea is becoming increasingly dangerous. The Ukrainian prime minister, Arseniy Yatsenyuk, has declared the movements of Russian troops on the peninsula a "declaration of war to my country," and has appealed to NATO for help.

The Western defense alliance called a meeting on Sunday (02.03.2014) in Brussels, with NATO General Secretary Anders Fogh Rasmussen announcing on Twitter that the 28 member states wanted to consult about the situation in the Ukraine and "coordinate closely."

Following the meeting, NATO sharply condemned Russia's military escalation in Crimea. "Military action against Ukraine by forces of the Russian Federation is a breach of international law," said Rasmussen. "We call on Russia to de-escalate tensions." In a statement, NATO called Ukraine "a valued partner." 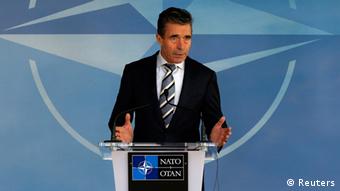 NATO's Rasmussen had sharp words for Russia on Sunday

Ahead of the meeting, Rasmussen had said that Russia's actions "violate the principles of the United Nations charter" and "threatens peace and security in Europe." He called on "all parties to urgently continue all efforts to move away from this dangerous situation."

Germany's Chancellor Angela Merkel also expressed concern: "We are very worried about what we are seeing in Crimea," she said. German Foreign Minister Frank-Walter Steinmeier explained that anything Russia does in Crimea had to be wholly compatible with the sovereignty and territorial integrity of Ukraine and the agreements about the stationing of Russia's Black Sea fleet in the region. "It's still possible to turn back," he said.

Talk to Russia, not about Russia

Experts have criticized NATO for not including Russia in the talks. "I would have preferred it if they had immediately called a special session of the NATO-Russia Council - at the foreign minister level," said Harald Kujat, former German Air Force general and a former chairman of the NATO Military Committee. "That would certainly have had a greater effect on Russia."

But Ukraine is not a NATO member state, which means there is probably not a great deal the alliance is able to do at this point. "From that point of view it will be difficult for NATO really to offer concrete help," Kujat said. He also thinks it would be wrong for NATO to offer military assistance. "At the moment the main thing is to speak with Russia, not about Russia." 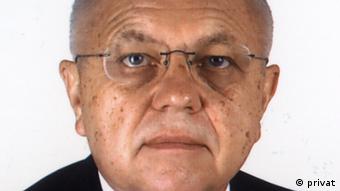 Kujat thinks the West should talk to Russia, not about Russia

In addition, Russia is the world's second-largest nuclear power, making a military escalation extremely risky. "It has to be the interest of all those concerned to avoid an escalation at all costs," said Kujat.

From the point of view of military expert Klaus Mommsen, NATO could at least take on a role as mediator. "After all, NATO is not just a defense alliance," he says. "After the break-up of the Soviet Union it developed into a political platform on which Russia is also represented, through the NATO-Russia Council, for example."

When Russia and Georgia were at war in 2008, NATO opted for diplomacy. Today, South Ossetia and Abkhazia are now effectively Russian protectorates. "People will bear these negotiations in mind and will try to identify where they went wrong," said Mommsen.

Russia could now be internationally isolated. Late Sunday, the United States and six other major industrialized nations announced that they had canceled preparations for the G8 summit in Sochi in June. "The question is, is it worth it?" Mommsen asked.

Despite the latest news coming out of Crimea, there have also been some positive developments: Russian Prime Minister Dmitry Medvedev is said to have spoken on the phone with his Ukrainian counterpart. "At least they're starting to communicate," said Mommsen.

When it comes to coercing Russia into keeping its armed forces out of Ukraine, Europe's options are fairly limited. Various sanctions have been proposed, but imposing them would be difficult. (03.03.2014)

Ukraine's government has demanded Russia withdraw its troops from Crimea, and has called in its reservists. But the new government's room for action is limited. (02.03.2014)

Putin agrees to Ukraine 'fact-finding' mission after talk with Merkel

Russian President Putin has agreed to a proposal from the German chancellor to form a "fact-finding" mission to calm tensions with Ukraine. The move follows Western outcry over his deployment of troops to Crimea. (02.03.2014)