Putin agrees to Ukraine 'fact-finding' mission after talk with Merkel

Russian President Putin has agreed to a proposal from the German chancellor to form a "fact-finding" mission to calm tensions with Ukraine. The move follows Western outcry over his deployment of troops to Crimea. 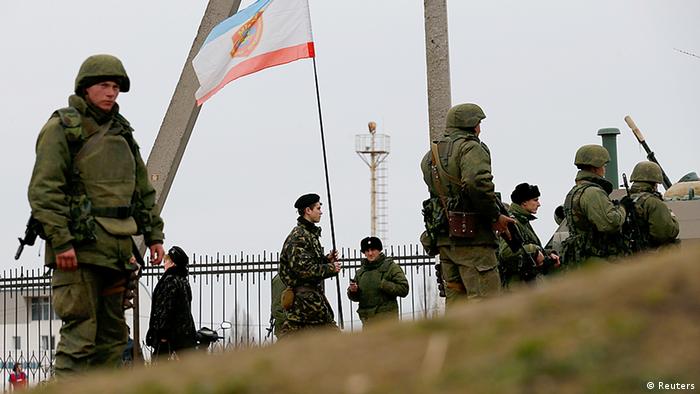 German Chancellor Angela Merkel and Russian President Vladimir Putin spoke about escalating tensions between Moscow and Kyiv on Sunday night. The conversation came after threats from Western leaders to levy sanctions on Russia and even the suggestion it could be ousted from the G8 over deploying troops into Ukrainian territory.

Even though Putin defended his decision - directing Merkel's "attention to the unrelenting threat of violence…to Russian citizens and the whole Russian-speaking population [in Ukrainian territory]" - he also agreed to work with her to curb the diplomatic crisis.

"President Putin accepted the German chancellor's proposal to immediately establish a commission of enquiry as well as a contact group, possibly under the direction of the [Organization for Security and Co-operation in Europe] to open a political dialogue," a statement from Berlin said.

The chancellery did not provide further details about the proposed "contact group."

US President Barack Obama reportedly discussed the turmoil in Ukraine with Chancellor Merkel after her call with Putin, according to Reuters news agency.

Germany against Russian exit from G8

"The format of the G8 is actually the only one in which we in the West can speak directly with Russia," Steinmeier told German public broadcaster ARD. "Should we really give up this unique format?"

Steinmeier has played a vital role in negotiations with Kyiv, where he helped broker a peace deal between the pro-EU opposition and the government under ex-President Viktor Yanukovych last month. The German foreign minister has continued to advocate peaceful dialogue amid heightened tensions with Russia over the allegiance of Ukraine's southern peninsula of Crimea, which has a majority Russian-speaking population.

Kerry insisted Russia still had a "right set of choices" to end the crisis, otherwise the G8 and other countries were prepared "to go to the hilt to isolate Russia," he told CBS' "Face the Nation." Along with the US and Russia, the G8 includes Britain, Canada, France, Germany, Italy and Japan.

Putin "is not going to have a Sochi G8, he may not even remain in the G8 if this continues. He may find himself with asset freezes on Russian business, American business may pull back, there may be a further tumble of [Russia's currency]," Kerry told NBC's "Meet the Press."

While Kerry derided what he called Russia's "brazen act of aggression," he stopped short of threatening US military involvement.

"The last thing anybody wants is a military option in this kind of situation. We want a peaceful resolution through the normal processes of international relations," he said.

Ahead of crisis talks with NATO ambassadors, the head of the 28-member alliance, Anders Fogh Rasmussen, warned Russia's actions threaten "peace and security in Europe."

Earlier on Sunday, hundreds of armed men believed to be Russian military surrounded a Ukrainian military base. Around two dozen Ukrainian soldiers placed a tank at the entrance to the facility, leading to a standoff, although no shots were fired.

In response, Ukraine's interim leadership ordered the country to put all armed forces on the highest alert and called up military reservists. Interim Prime Minister Arseniy Yatsenyuk warned Russia's actions put the two countries "on the brink of disaster."

"This is not a threat: this is actually the declaration of war to my country," he said in Kyiv.

Ukrainian authorities also launched a treason case against the newly-appointed head of the navy, who announced on Sunday he had switched allegiance to Crimea's pro-Russian regional leaders. In a televised statement, Denis Berezovsky said he "swears allegiance to the Autonomous Republic of Crimea" and told Ukrainian forces to lay down their arms.