EU officials have called for the UK to start the exit process "as soon as possible" after voters decided to leave the bloc. But the US president said their decision speaks to the "challenges raised by globalization." US President Barack Obama on Friday vowed to respect the will of UK voters after a slight majority voted in favor of leaving the EU in a historic in-or-out referendum, shocking world leaders and markets across the globe.

"The people of the United Kingdom have spoken, and we respect their decision," Obama said in a statement.

The US president said the UK and EU "will remain indispensable partners" of the US even as the parties negotiate their ongoing relationship "to ensure continued stability, security and prosperity for Europe, Great Britain and Northern Ireland, and the world."

The UK has long been a key ally for Washington, with Obama casting his voice in the referendum debate in April, when he warned that leaving the EU would mean trade relations would have to be renegotiated.

But he noted in a speech at Stanford University in California that the two countries' relationship would not be damaged.

"While the UK's relationship with the European Union will change, one thing that will not is the special relationship between our two nations," he said.

"Yesterday's vote speaks to the ongoing changes and challenges that are raised by globalization," Obama added. 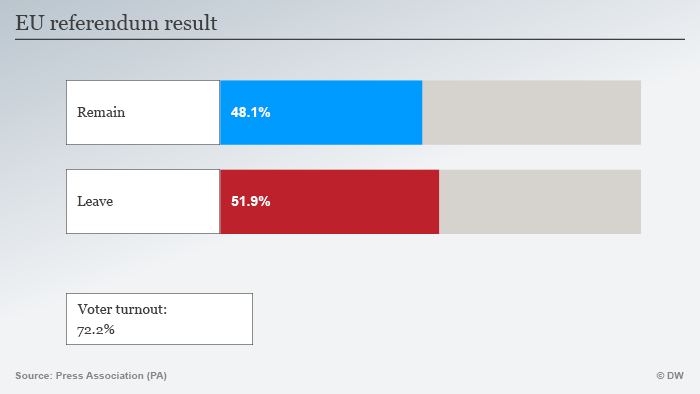 In Germany, Chancellor Angela Merkel described the decision to leave the bloc as a "watershed for Europe and the European unity process."

"What the consequences of this would be … would depend on whether we - the other 27 member states of the EU - prove to be willing and able to not draw quick and simple conclusions from the referendum in Great Britain, which would only further divide Europe," Merkel said.

Europeans must "never forget that the idea of European unity was an idea of peace," she added.

German Finance Minister Wolfgang Schäuble earlier this month told Germany's "Der Spiegel" news magazine that if the UK voted to leave, the country would no longer have access to the single market.

On Friday, he urged Europe to "look forward and deal with this situation."

"The procedures for an exit from the European Union are clearly defined and will be applied," Schäuble said.

But German Foreign Minister Frank-Walter Steinmeier admitted that "we don't have an answer to all the questions that have arisen" from the vote.

"This is a bitter day for Europe. We never stopped hoping that the British people would reach a different decision and vote in favor of the European Union. They did not do so," Steinmeier said.

The result of Thursday's vote sent markets across the globe into a tailspin, prompting fears from financial authorities of the impact on economic stability not only in the UK, but across the EU.

Ratings agency Moody's said Britain's creditworthiness was now at greater risk after voting to leave the European Union, as the country would face substantial challenges to successfully negotiate its exit from the bloc. Moody's assigned a negative outlook to its 'Aa1' rating for British government debt after Thursday's referendum.

"During the several years in which the UK will have to renegotiate its trade relations with the EU, Moody's expects heightened uncertainty, diminished confidence and lower spending and investment to result in weaker growth," the agency said.

International Monetary Fund (IMF) Director Christine Lagarde called for authorities in the UK and EU to "work collaboratively to ensure a smooth transition to a new economic relationship."

"We strongly support commitments of the Bank of England and the European Central Bank to supply liquidity to the banking system and curtail excess financial volatility," Lagarde said in a statement.

Secretary Jack Lew of the US Treasury Department said Washington would continue to support both sides, noting that the UK has the "necessary" tools to achieve financial stability.

"We will work closely with both London and Brussels and our international partners to ensure continued economic stability, security and prosperity in Europe and beyond," Lew said in a statement.

Meanwhile, the Group of 7 ministers and governors offered support to the financial sector while markets stabilized, adding that it respected the decision taken by voters in the UK.

"We remain united and continue to maintain our solidarity as G7," the group - made up of Canada, France, Germany, Great Britain, Italy, Japan, and the United States - said in a statement.

"G7 central banks have taken steps to ensure adequate liquidity and to support the functioning of markets. We stand ready to use the established liquidity instrument to that end," it added.

'As soon as possible'

"We expect the United Kingdom government to give effect to this decision of the British people as soon as possible, however painful that process may be. Any delay would unnecessarily prolong uncertainty," the senior EU officials said.

But they added that the UK must continue to uphold its obligations to the EU as a member until the process of negotiations is over.

"In a free and democratic process, the British people have expressed their wish to leave the European Union. We regret this decision, but respect it," they added.

Juncker said the EU would pursue a "reasonable approach," but renegotiations needed "to get started immediately."

"Britons decided yesterday that they want to leave the European Union, so it doesn't make any sense to wait until October to try to negotiate the terms of their departure," Juncker noted, referring to Prime Minister David Cameron's decision to step down from office in October.

French President Francois Hollande will host Italian Prime Minister Matteo Renzi in Paris on Saturday, days ahead of a meeting of European leaders. On Monday, Chancellor Merkel is expected to meet with Hollande, Renzi and Tusk in Berlin.

An informal meeting between the EU's 27 remaining leaders is expected to take place on Wednesday, Tusk said. The European Council will convene on Tuesday and Wednesday to formally discuss the results of the UK vote.