US President Barack Obama has arrived in Britain, where he has already entered into the debate about whether Britain should leave the EU. Obama said the bloc magnified British influence rather than diminished it. 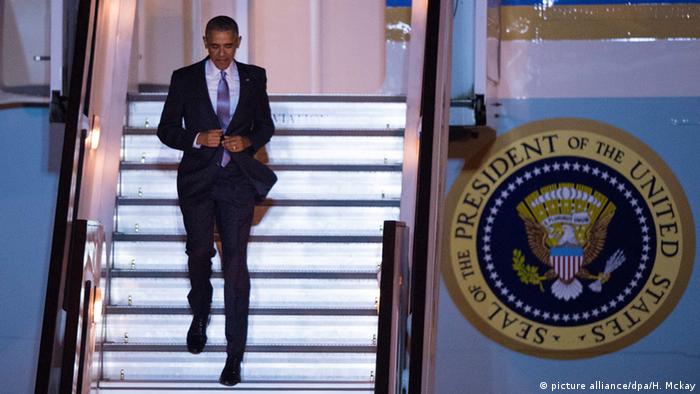 The president's Air Force One plane touched down at London Stansted Airport on Thursday evening, to begin what could well be his final trip to Britain as president.

On the agenda was a meeting with Queen Elizabeth II just after her 90th birthday celebrations, as well as talks with British Prime Minister David Cameron ahead of the June 23 Brexit referendum on whether Britain should leave the EU.

Even before arriving, Obama entered the toxic debate on Britain's EU status, making an appeal in the largely euroskeptic, right-wing "Daily Telegraph" newspaper.

"The United States sees how your powerful voice in Europe ensures that Europe takes a strong stance in the world, and keeps the EU open, outward looking, and closely linked to its allies on the other side of the Atlantic.

"The US and the world need your outsized influence to continue - including within Europe," the article said.

Pro-Brexit campaigners have called on Obama to stay out of the referendum debate, saying it is a matter for the British people to decide. However, Obama said the common histories and interests of Britain and the United States meant that he felt compelled to comment.

"I will say, with the candor of a friend, that the outcome of your decision is a matter of deep interest to the United States," Obama wrote.

"The tens of thousands of Americans who rest in Europe's cemeteries are a silent testament to just how intertwined our prosperity and security truly are."

Two opinion polls published on Wednesday appeared to show the pro-EU "Remain" campaign had gained momentum ahead of the referendum. An Ipsos MORI telephone opinion poll showed that the Remain camp, supported by Cameron, had a 10 percent lead on those who planned to vote for a Brexit.

A TNS poll the same day also showed a widening gap, putting the Remain campaign on 38 percent compared with 34 percent in favor of the Brexit.

After his visit to the UK, the US president will head to Germany for a meeting with Chancellor Angela Merkel and other European leaders.

The Mayor of London has attacked US President Barack Obama for his support of the UK staying in the EU. In a newspaper column, Johnson dismissed Obama's intervention as a "piece of outrageous and exorbitant hypocrisy." (14.03.2016)