Euroskepticism and a rejection of establishment parties are on the rise in the EU. Amid the turmoil, a recent survey has looked at how Germany and other EU states view a possible "Brexit" and its consequences. 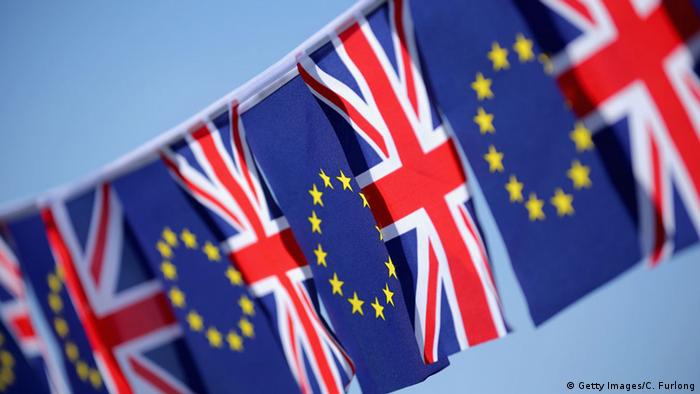 With the UK's June 23 referendum just over two months away, a survey taken this month looked to Germany, Poland, France and Spain for opinions about a possible "Brexit" - how likely they thought it was, whether they wanted it and whether it would hurt the EU.

The German-based pollsters Infratest-dimap conducted the nationwide telephone and online surveys in cooperation with institutes in each of these countries between April 4 and 14.

The sample size ranged from 1,000 to 1,500 voters aged18 and up in each country, except in the UK, which included residents unable to vote as well.

Most want the UK to stay in the EU

When asked whether the United Kingdom should remain in the EU, the vast majority of respondents said yes. Germany showed the most support, with 78 percent wanting the island nation to stay. In Spain, France and Poland, 67 percent, 59 percent and 54 percent respectively also said yes.

A potential Brexit received lower support - under 15 percent - in Germany, Spain and Poland. But France bucked the trend with over 40 percent expressing the wish that the UK leave the European Union.

It should be noted that nearly 40 percent in Poland and over 25 percent in Spain said they didn't know.

In the UK, voters remain divided. According to the Infratest-dimap poll, 34 percent favored a breakaway from the EU, while 38 percent said the UK should remain. Twenty-eight percent said they didn't know. These numbers excluded people who said they weren't voting. 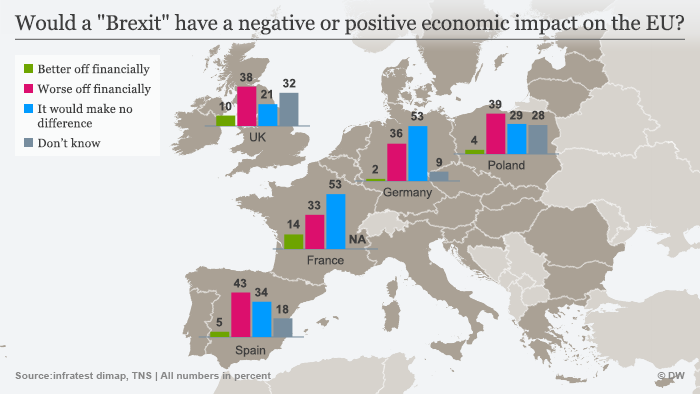 The second question asked how respondents thought the UK would vote. Over 40 percent of surveys among the four EU member states showed that people expected the UK to remain in the EU.

But the results highlighted more uncertainty in France and Germany than in Spain and Poland.

Among French respondents, 52 percent expected the UK to vote in favor of leaving the EU, compared to 47 percent who did not. In Germany, 38 percent foresaw a Brexit and 47 percent did not.

That contrasted with 48 percent and 44 percent of Spanish and Polish respondents saying the UK would stay, while fewer - under 30 percent - of them said a Brexit should be expected. These figures corresponded more closely to the UK's own assessment, where only 26 percent said the country would leave the EU.

In both the UK and Poland, over 30 percent said they didn't know. That figure was lower in Spain (24 percent) and Germany (15 percent). 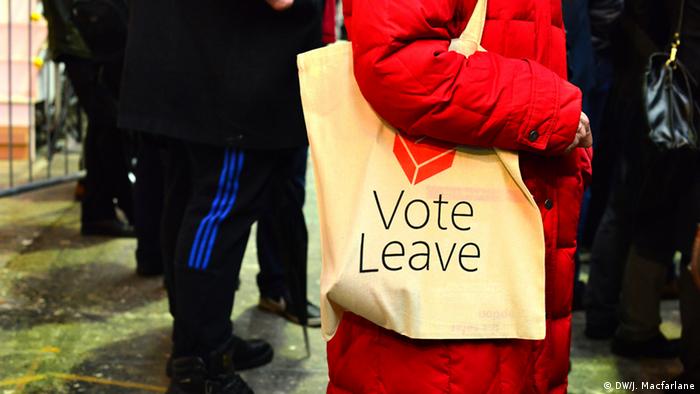 This person in Britain clearly demonstrates her standpoint

Although the UK is not part of the eurozone and, therefore, doesn't use the euro as its currency, concerns have been raised about the economic effects of a Brexit on an already weakened EU.

In Germany and France, however, over 50 percent of respondents said a Brexit would make no difference economically to the bloc.

The survey of Spain, where a property bubble unleashed a financial crisis in 2008, showed that 43 percent anticipated the EU would be worse off financially. Under 40 percent of German, French and Polish people surveyed agreed.

Less than 15 percent of respondents, including those in the UK, thought a Brexit would leave the European Union better off financially.

Nearly 40 percent of UK respondents said a Brexit would hurt the EU's finances, while 21 percent said it would not. Over 30 percent said they didn't know what the outcome would be.

British Finance Minister George Osborne warned on Monday of the "profound economic shock and real instability" a breakaway could cause in the UK.

But his warning that British households would lose 4,300 pounds ($6,100 or 5,370 euros) annually was dismissed by anti-EU campaigners, who accused him of using scare tactics.

The IMF has also lowered its growth forecast for 2016 in response to "intensifying financial and political risks," which include the UK's June 23 referendum.

With campaigning on the UK's EU referendum now in full swing, both the "Remain" and the "Leave" camps will have to combat voter apathy and mistrust, as Julia Macfarlane reports from Manchester. (18.04.2016)

The president of the European Parliament, Martin Schulz, has said the EU is on an open-ended "slippery slope." The silent majority underestimated the danger, he warned, and called on EU politicians to show commitment. (12.04.2016)