The president of the European Parliament, Martin Schulz, has said the EU is on an open-ended "slippery slope." The silent majority underestimated the danger, he warned, and called on EU politicians to show commitment. 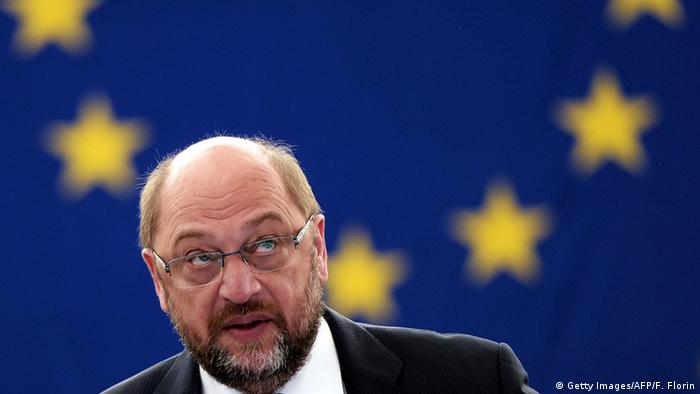 European Parliament President Martin Schulz urged the European Union on Tuesday not to underestimate the current threat to the 28-member bloc.

The trust of many people in "entire institutions, whether national or European," was lost, Schulz told the German daily "Frankfurter Allgemeine Zeitung" (FAZ). Schulz said there was the risk of an "implosion of the EU," partly due to Euroskeptic movements within EU member states.

"If the British leave the EU, there will be demands for further escape referendums," the German Social Democrat politician said, referring to the UK's upcoming "Brexit" referendum in June.

While admitting that Euroskeptics remained in the minority, Schulz said the silent majority was taken in by the notion that in the end everything would be fine. The negative outcome of last week's Dutch referendum on the Association Agreement with Ukraine showed that this was a fallacy that wasn't to be relied upon, he added.

'Reach the hearts of the people'

"In Europe, we are on a slippery path," the EU president said, accusing EU leaders of showing too little commitment to the European idea.

"Hardly any of the governments are really fighting to reach the hearts of the people," he added, urging them to counter the "easy answers" of EU skeptics by showing a clear commitment to the bloc.

"If someone wants to break Europe, then they just need to hold more referendums," he said, adding that the Netherlands referendum had mainly been used by Eurocritics as a domestic vote against Mark Rutte's government and the EU.

European Parliament President Martin Schulz says the EU's refugee deal with Turkey must not lead to concessions on human rights. He criticized Turkey's official reaction to a satirical German video. (03.04.2016)