Euroskeptic leaders cheered Dutch voters' rejection of a EU-Ukraine deal, saying it showed deep opposition to EU policies. Some have said it's the moment that will be remembered as the beginning of the end for the EU. 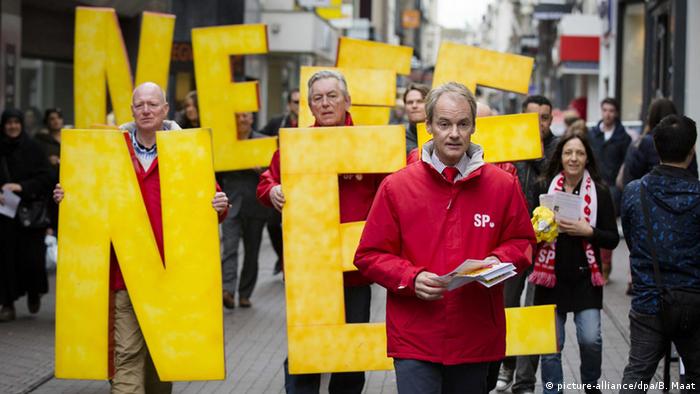 While participating voters in the Netherlands were clearly against offering an EU association agreement to Ukraine, euroskeptic politicians across Europe interpreted the result as a slap in the face to the entire 28-member bloc.

Dutch populist, euroskeptic lawmaker Geert Wilders wrote that the 61 percent of voters who rejected the EU-Ukraine deal had sent a clear message to EU leaders.

Voter turnout stood at a projected 32 percent, just clearing the 30 percent minimum required for the vote to be valid.

With a close EU referendum of their own approaching, euroskeptic politicians in Britain paid particularly close attention to the Dutch poll. UK Independence Party (UKIP) member of European Parliament Roger Helmer said the vote was a blow against the EU.

Leave EU, one of the main groups calling for the British to vote to leave the EU in a June 23 referendum, said the Dutch vote showed that a founding EU member was skeptical of the bloc's policies.

"Nobody could accuse the Dutch of not being good Europeans, but they have no willingness to open their borders to more migrants and pick up the tab for Ukraine's problems, just like most UK voters," said Leave.EU spokesman Brian Monteith. "The sun is now setting on the European Union."

UKIP leader Nigel Farage, who went to campaign in the Netherlands, said members of the Dutch group that organized opposition to the Ukraine deal would also come to Britain.

For his part, British Prime Minister David Cameron said he hoped the Dutch vote would not affect Britain's own referendum.

"I hope it won't affect the results of our referendum because it is a very different issue," Cameron said while campaigning to keep the United Kingdom in the EU.

The head of the German right-wing party Alternative for Germany (AfD) in the state of North Rhine-Westphalia, Marcus Pretzell, applauded the Dutch for "avoiding another EU mistake."

Messages of congratulations also came from French Front National leader Marine Le Pen, who said the vote was another step toward a Europe of nations.

The Dutch government said it would take the non-binding referendum's result into consideration. Dutch parliament has already approved the agreement, though the ratification process has not been completed. Provisionally already in place, all 27 other EU members have ratified the deal, which requires unanimous approval before it completely goes into effect.

The European Commission has said it will wait for the Dutch government to suggest a way forward.

European Commission head Jean-Claude Juncker had hoped Dutch voters would vote in favor of the agreement and spokesperson Margaritis Schinas told reporters Juncker was "sad" about the outcome.

The next step now was "for the government of the Netherlands to analyze the outcome and decide on the course of action," Schinas said, adding that, "The Commission remains strongly committed to the development of its relations with Ukraine."

The Netherlands currently holds the EU's rotating presidency and said it will need days or weeks to consult with lawmakers and European partners to determine its next step. Some in the Netherlands predicted Prime Minister Mark Rutte's already shaky government coalition could collapse.

Ukrainian President Petro Poroshenko, however, said on Thursday that his country would continue moving towards the European Union. Poroshenko's predecessor, Viktor Yanukovych, was ousted from office following major protests that erupted after the former president refused to sign the EU association agreement.

Officially, Dutch voters are casting ballots on European Union trade ties with Ukraine. But, unofficially, the poll is widely seen as a gauge of anti-EU sentiment ahead of a UK vote on whether to leave the EU. (06.04.2016)

Netherlands: A referendum on EU politics?

For the euroskeptics who launched the Dutch referendum, the vote is more about getting "democracy" in the EU rather than the Ukraine deal itself. Are they going to succeed? (05.04.2016)