British Prime Minister David Cameron has successfully negotiated a "special status" deal for Britain to remain in the EU. Now he has to sell it to a skeptical British public that will vote on the issue in a referendum. 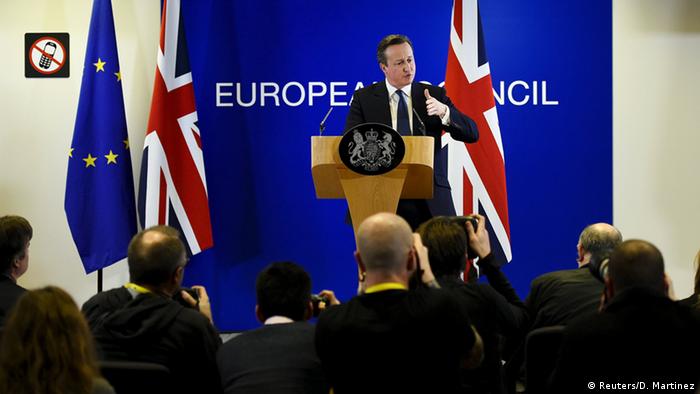 Cameron will recommend to his Cabinet on Saturday that they support his newly negotiated "special status" agreement for Britain within the European Union.

But he also said his Cabinet members, as well as the rest of his Conservative Party, were free to decide whether they wanted to support the agreement, which would keep Britain in the EU, or oppose it, which would mean leaving the 28-nation union.

It was a tactful way of acknowledging he has little control over his deeply divided party, despite winning re-election last year by a surprisingly large margin.

A Grassroots Out rally gathered in central London Friday evening to oppose Britain's continued membership in the EU, as Cameron announced the new deal.

"Dave's 'deal' is not worth the paper it's written on," said Nigel Farage, leader of the anti-EU UK Independence Party (UKIP).

"We're being asked to remain in a union that now resembles a burning building," Farage said. "There is an exit door. I suggest we take it."

The Euroskeptic "Vote Leave" campaign was quick to dismiss what it called "Cameron's hollow deal" as bad for Britain.

Sealing off the Brexit

Sealing off the Brexit

Labour leader Jeremy Corbyn called it a "theatrical sideshow... designed to appease his opponents within the Conservative Party."

"They are not about delivering reforms that would make the EU work better for working people," Corbyn said, accusing the premier of bringing "an internal Conservative Party dispute to international proportions."

The legally binding decision gives Britain an explicit exemption from the founding goal of "ever closer union," offers concessions on the welfare rights of migrant workers and establishes safeguards for London's financial center.

But changes to migrants' welfare rights will only affect those who come in the future, not the more than 1 million that are already in Britain - a victory for eastern European countries, where most of Britain's migrants come from. 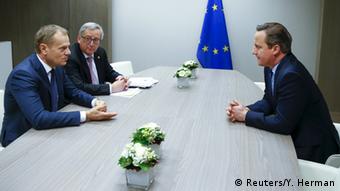 The British people will now decide whether the country is better off in the EU or out of it. A referendum is expected later this year, perhaps on June 23. Both sides seem ready to press their case.

Douglas Carswell, UKIP's sole member in the British parliament, said, "The 'renegotiation' charade is over. Let the campaign begin!"

France has raised a number of objections about Britain's calls for safeguards for countries that do not use the euro. The push for a deal to keep Britain in the EU faces growing skepticism. (15.02.2016)

British Prime Minister David Cameron and his European Union counterparts all want Britain to stay in the EU. But whether he can get them to approve a package of reforms that will loosen Britain's ties remains uncertain. (16.02.2016)

UK Prime Minister David Cameron has traveled to Brussels in a bid to renegotiate his proposed reforms with European Parliament leaders. A referendum on whether Britain should remain in the EU could be held in June. (16.02.2016)