Netherlands: A referendum on EU politics? | Europe | News and current affairs from around the continent | DW | 05.04.2016

Netherlands: A referendum on EU politics?

For the euroskeptics who launched the Dutch referendum, the vote is more about getting "democracy" in the EU rather than the Ukraine deal itself. Are they going to succeed? 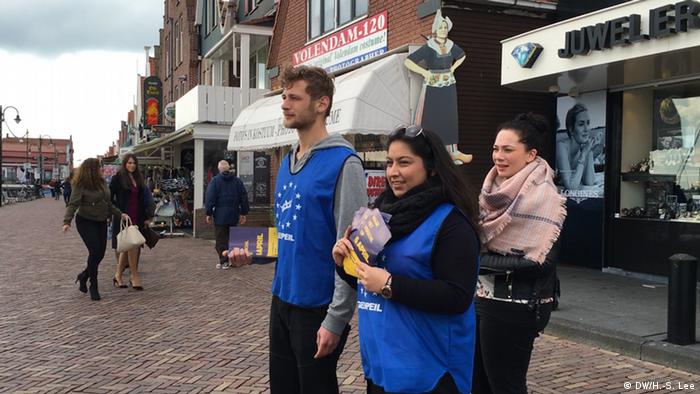 In a small, tranquil beachside town called Volendam, René van Leeuwen is eagerly handing out flyers to pedestrians. He and his friends are wearing vests in azure blue, printed with a white crown and in big letters "GeenPeil" ("no level"). They are young activists, trying to get the Dutch people to vote in the April 6 referendum. The four of them walk along the coastline and speak to whoever they come across: cyclists, ice-cream parlor customers, souvenir-shop owners. Most of them appear to be interested in what they are promoting.

It's about Europe, not Ukraine

"It is important for people to vote, because for the first time, we can say if we agree or don't agree with things that are going on in Europe," says René. To him, the association agreement between EU and Ukraine is not really the central matter. Even if it says so on the ballot papers. It is rather about getting the voices of the Dutch people heard in Brussels - and bringing more democracy into EU decision-making. 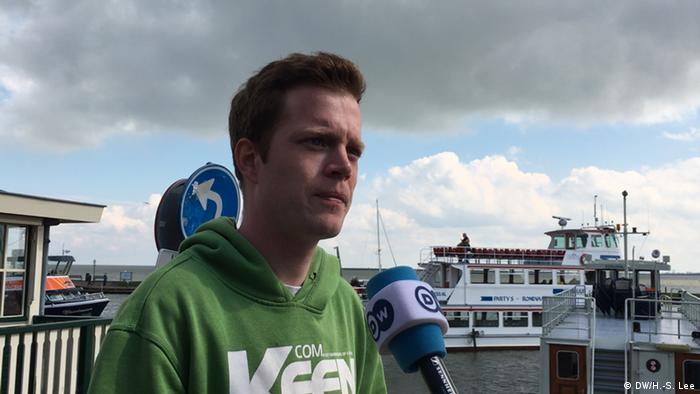 Geenpeil activist van Leeuwen: this is about more than the actual referendum

The initiative is a joint venture by the popular right-wing Dutch blog "GeenStijl" and two euroskeptic organizations. Last year, it surprisingly drummed up more than 400,000 signatures and thus forced the Netherlands to hold this so-called advisory referendum, meaning that it is not binding.

The Netherlands has taken over the rotating presidency of the European Union, at something of a challenging time. Amid disputes about migration, austerity and strife with Russia, the bloc's solidarity appears stretched. (01.01.2016)

A satirical website in the Netherlands has enough supporters to force a referendum on the EU's pact with the Ukraine. The announcement suggests a rise in euroskepticism in the country. (14.10.2015)

Dutch citizens will now have to decide whether they agree with the Ukraine-EU treaty, which enables tighter economic and political cooperation between the two sides. Euroskeptics, including René, denounce the "undemocratic" decision process leading to the agreement. For them, the agreement is also a step toward further EU expansion. Some of them also argue that the deal could cost Dutch taxpayers billions of euros. But René's goal today is to get people to vote.

We need to help Ukraine

On the other hand, the Dutch government is clearly in favor of the treaty. Over the weekend, dozens of politicians gathered at Dam Square, in the historical center of Amsterdam, to campaign for the treaty. They drew a crowd of 200 people, many of them supporters of their political parties. A big crowd of people dressed in green in front of the stage, held up flags and posters with "Green Left" and "yes" slogans.

"Ukraine, a country that has long been influenced by the Soviet Union, now would like to become a more democratic country. We should help them," says a supporter in the crowd, while the politicians speak from the stage. For him and many others who are in favor of the association agreement, it is important to help Ukraine develop democracy, fight corruption and shift away from Russian influence. "For the Dutch citizens, the association agreement may not matter much, but it means a lot to Ukraine," another supporter, dressed in green, added.

"They abuse the referendum"

Many in the yes-camp argue that the Netherlands is going to benefit economically due to exports and trade. To them, the true reason for calling a referendum is for the activists to demonstrate their disappointment toward the Dutch government and the EU: "I am worried that in the future, other debates will also become populist, anti-EU, where the real issues will not be discussed," says Daan Brouwer, a young Dutch student holding a large "vote yes" poster. To a certain extent, he agrees that euroskepticism is on the rise and that the Dutch people are feeling a democratic deficit in the EU. "But that is not the point here. If we vote no, all sacrifices Ukraine has made would have been for nothing." 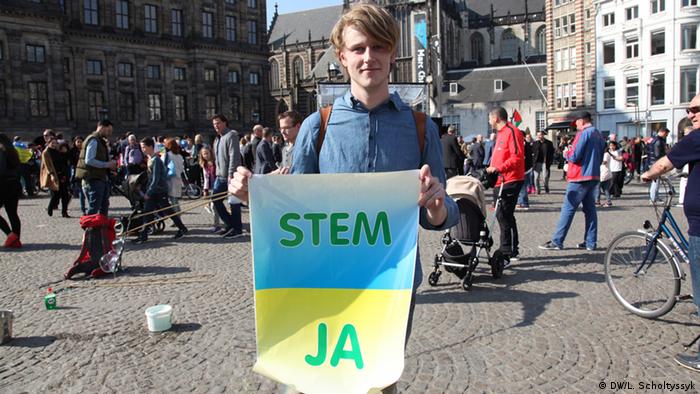 In favor of the deal: Dutch student Daan Brouwer at the Stem Voor Event in Amsterdam

That fear is shared by Sybrand Buma, leader of the Christian Democratic party (CDA), who gave a speech on the event. He believes the europskeptics are instrumentalizing the referendum: "The people who made this referendum possible were very naïve, thinking that we would have rational debates," Buma told DW, as he was resting next to the stage. "But these are the ones who feel abandoned by politics, and this is a big problem. A referendum like this is always used to say 'no,' whatever the question is."

The CDA politician was also worried that the position of the Netherlands in the EU would be affected if the citizens vote "no." And although the outcome is non-binding, the government in The Haag could not ignore its citizens' will. Futhermore, a no-vote would lower their credibility. 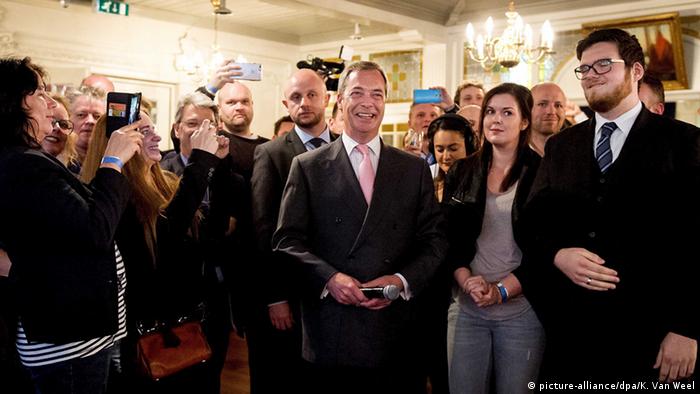 Euroskeptic Nigel Farage in Volendam: The EU is deciding the fate of its members

The no-campaign in Volendam has gained prominent support from the UK. In a small seaside hotel , Nigel Farage, the leader of the UK Independence Party, is waiting in a lounge to deliver his speech on the referendum. He thinks the treaty is largely a political act. "Everyone knows that the Ukraine deal is not about trade. This is a precursor to visa-free travel until the end of the year, and also letting them become members of the EU," Farage tells DW.

"I'm very concerned that the EU […] is playing political games and seeking expansion. Those involved in that, who are waving European flags […] tell me this is a project about peace? I doubt that." As a supporter of a Brexit, he thinks the euroskeptics in the Netherlands might not yet want to leave the EU, but they want to express their views and bring about changes. "If governments become scared of their electorates, then Brussels will start to behave differently. "

Nigel Farage received a warm welcome when it was finally his turn to speak at the event. "Who supports Brexit?" the moderator asks the crowd of supporters. Everybody in the hall raises their hands, and they clap enthusiastically when Farage delivers his set piece about Europe and democracy.

Activist René van Leeuwen and his friends have come to hear the British EU parliamentarian. He feels proud being part of the crowd who initiated the referendum. "The signatures are just from ordinary people like you and me, who want more influence in our democracy. It has never been done before in history," says René. No matter what the result, he hopes the Dutch people will use a referendum as a tool more often. "I hope the next one will be about TTIP."

Referendum on Ukraine-EU treaty gets under way