Ukraine worried about EU association agreement | Europe | News and current affairs from around the continent | DW | 05.04.2016

The Dutch Ukraine referendum threatens to put a damper on the EU association agreement with Ukraine. The "no" campaign is leading the opinion polls. Ukrainian activists are trying to turn the tide. 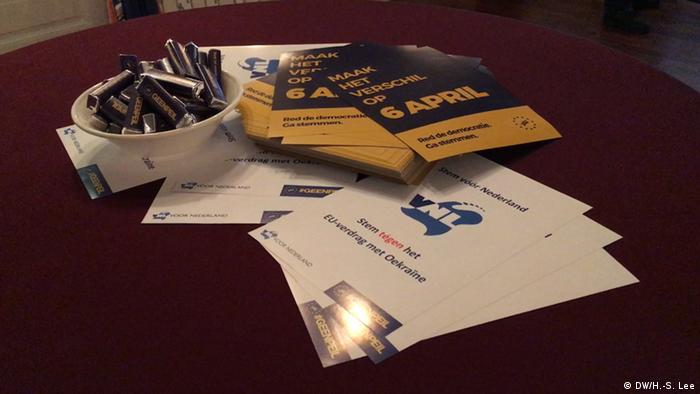 Ukraine did not expect this setback. The 'Panama Papers' leak that revealed the offshore financial activities of many politicians worldwide, including Ukrainian president, Petro Poroshenko, has come at an inopportune moment for the country. The Netherlands is holding a referendum on April 6 about the EU Association Agreement with Ukraine. Opinion polls show that the "no" campaign is clearly leading with two-thirds; however, many voters are still undecided.

Many Ukrainian politicians, celebrities and above all, members of civil society in Ukraine have visited the Netherlands to make a case for their country. One Ukrainian initiative gathered video messages made by normal Ukrainians who presented their arguments for the association agreement and the videos were published on YouTube. "We want to make it clear that this is not only about an economic agreement but also a chance to live in a normal, democratic society," said one of the co-founders of the initiative, Ostap Prozyk. 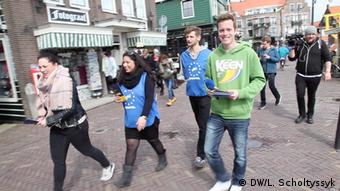 Euroskeptics pass out flyers for the anti-Ukraine referendum

Many Ukrainians thought that they had already gotten past the rocky road to the association agreement with the EU. The treaty foresees the establishment of a free trade zone. First, the agreement was thwarted by Brussels due to the lack of democracy in Ukraine. Two years later, then President Viktor Yanukovych shelved the agreement and claimed it was due to economic pressure from Russia. This step triggered protests in Kyiv, which led to a change of power. After that, Kyiv and Brussels tried to reach an agreement with Moscow and postponed the implementation of essential parts of the agreement by more than a year. The agreement has been applied in its entirety since the beginning of 2016, even though it has not officially been in effect.

Ukrainian and Dutch reputations will be damaged 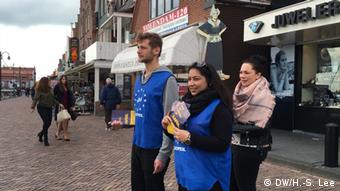 The referendum could damage both Ukraine and the Dutch government

Oleksiy Haran, a professor of political science in Kyiv, has noticed in various forums that the referendum is not only about Ukraine. "The only question is how convincing it will be in the end for the Dutch public," Haran said. "The important thing is not the EU's association agreement with Ukraine, but an internal power struggle in the Netherlands." The expert fears that a defeat will greatly damage Ukraine's reputation.

For the Netherlands, which currently holds the EU presidency, a "no" would likely also be disgraceful, observers say. The future of the agreement remains unclear. The referendum result may not be legally binding but the government will not be able to ignore it. A Dutch "no" may actually delay the full effect of the treaty and weaken pro-Western sentiment in Ukraine.

A satirical website in the Netherlands has enough supporters to force a referendum on the EU's pact with the Ukraine. The announcement suggests a rise in euroskepticism in the country. (14.10.2015)

US to offer Ukraine financial support as political crisis deepens

The US is moving forward with over $300 million in security assistance to Ukraine. But a $1 billion loan may stay off the table until Ukraine gets tough on corruption. (01.04.2016)